A new report from Urbanation confirms that GTA rental market recovery began in earnest during the second quarter of 2021, with a surge in new leases, reduced vacancy, and increased rents, in response to easing lockdown measures.

Notably, downtown Toronto led the growth in rental activity after months of lagging behind other GTA markets. Mass vaccination rollout and gradual reopening of the economy, combined with attractive rent discounts, are accredited with bringing renters back into the dense urban area.

“The GTA rental market began to resemble pre-COVID times during the second quarter, which is a testament to a strong foundation of demand that will only grow going forward as immigration recovers, schools and offices reopen, and expensive ownership housing leads to greater levels of renter household formation,” said Shaun Hildebrand, President of Urbanation. “While new construction activity is also on the rise, the level of supply underway is expected to lag behind demand, creating conditions for rents to continue rising towards pre-covid levels and beyond in the months to come.”

Looking at “newer” purpose-built rental apartment projects completed since 2005, the report indicates an average vacancy rate of 5.2 per cent at the end of Q2-2021, decreasing from a high of 6.5 per cent in Q1-2021 but remaining well above the 2.1 per cent level from a year ago. Vacancy rates averaged 6.9 per cent in the City of Toronto and 1.4 per cent in the 905 region across all new builds excluding those still in the initial lease-up phase. 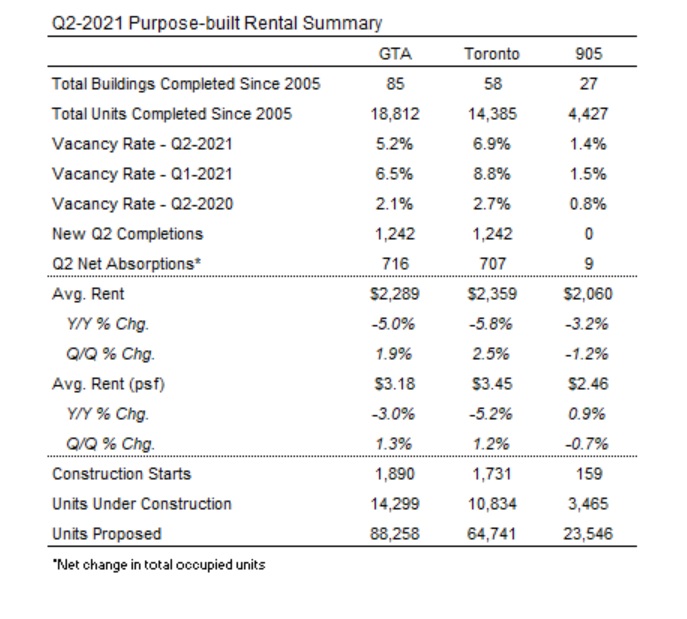 A total of 1,242 new purpose-built rental units were completed and began occupancy during Q2-2021, the second highest quarterly total for new supply additions in more than 30 years (behind the 1,782 units completed in Q1-2019). The new supply, which was entirely located in the City of Toronto, was met with high-level demand, as quarterly net absorptions (i.e. the change in total occupied units) within the rental stock built since 2005 rose to 716 units — four times higher than the level from a year ago (179 units) and 67 per cent above the five-year quarterly average (430 units).

Average rents for units that were available within newer rental buildings completed since 2005 in the GTA were $2,289 ($3.18 per square foot) during Q2-2021, declining 5.0 per cent year-over-year, but rising 1.9 per cent quarter-over-quarter — the first rent increase since the start of the pandemic.

That said, incentives were still prevalent in the market during the second quarter, with 88 per cent of surveyed buildings offering some form of discount. One month of free rent continued to be the most common incentive, followed by two months of free rent.

The number of leases signed for condominium rentals in the GTA more than doubled from a year ago, surging 108 per cent to 12,747 units — the highest Q2 level on record. Over the last four quarters, condo lease transaction activity reached an unprecedented 50,004 units, which was 58 per cent higher than the pre-COVID peak of 31,696 units leased in the four quarters leading to Q1-2020. Demand in the latest quarter was driven by the former City of Toronto (largely representing the downtown market), where the number of new leases signed grew 129 per cent year-over-year in Q2.

The 7,642 condo lease transactions in the former City of Toronto represented a record high share, indicating a migration of renters back into the core. 2/3 Renters have remained budget conscious during the initial stages of the market recovery and haven’t necessarily been seeking more space coming out of the pandemic. Studios, which experienced the sharpest drop in rents during COVID-19, recorded the strongest annual growth in lease transaction volume of 154 per cent in Q2.

More generally, the smallest condo rentals under 600 square feet represented a record high share (36%) of units leased in the second quarter. As a result, the average size of a condo unit leased in Q2 fell to a record low of 695 square feet. At an average of $2,124, condo rents in the GTA were down 9.8 per cent year-over-year in Q2 but increased 4.3 per cent quarter-over-quarter. In the former City of Toronto, average condo rents of $2,147 grew 4.9 per cent from the first quarter, remaining 12.5 per cent lower than a year ago.