The rapidly declining GTA rental rates observed in 2020 and early 2021 appear to be levelling out, according to new data from Bullpen Research & Consulting and TorontoRentals.com. So far in 2021, average GTA rental rates have decreased by less than 1 per cent, while GTA rents in 2020 decreased by 16 per cent overall since the onset of the pandemic last March.

“Canada is a couple of months behind the U.S. in the vaccine rollout, and many American cities are fully open with few restrictions, and offices are opening back up,” said Ben Myers, president of Bullpen Research & Consulting. “Look for continued flatness until the fall in Canada, and rents to start rising more rapidly at that time. The changes to the mortgage stress test and the sharp rise in house prices will encourage more people to continue renting and accelerate the late-year rent increase.” 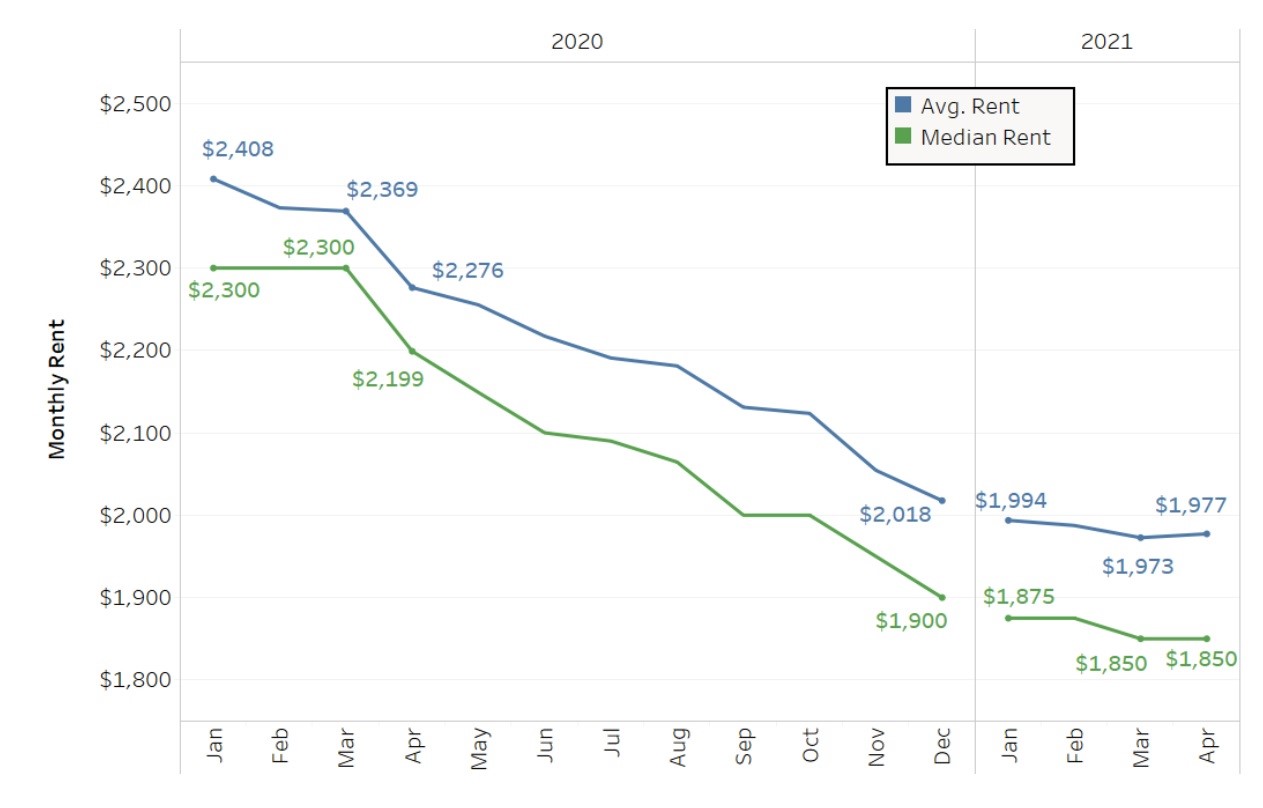 GTA rental rates by the neighbourhood

Average GTA rental rents for both condominium rentals and apartment units for the month of April grew by about 1 per cent month over month. Vaughan experienced the largest increase, rising by nearly 10 per cent to $2,136 per month, while Pickering experienced a month-over-month increase of 8.3 per cent to $1,790 per month.

Whitchurch-Stouffville and Richmond Hill experienced the largest month-over-month decreases in average rents, both declining over 5 per cent. Oshawa, East York, Mississauga, North York and Newmarket also saw declines of somehwere between 0.5 and 3 per cent.

Of the 30 Toronto neighbourhoods that experienced significant declines as a result of the pandemic, Rosedale-Moore Park is currently the pricest neighbourhood at $2,308 per month, down 14 per cent compared to a year ago. Meanwhile, South Parkdale, is the city’s least expensive area for this year at $1,669 on average, representing a decline of 20 per cent overall.

In the Yonge and Eglinton area, the average rent is currently $1,838 per month, representing a decline of 13 per cent since April of last year. High Park North had the lowest annual decline at 3 per cent, while Yonge-St. Clair experienced the largest decline at 39 per cent.

Other neighbourhoods with large declines since the COVID-19 outbreak include: Palmerston-Little Italy and Forest Hill North, both down 31 per cent; Greenwood-Coxwell, Casa Loma and Cabbagetown-South St. James Town, all down 29 per cent; The Beaches, down 28 per cent; East End-Danforth, down 27 per cent; Trinity-Bellwoods, down 25 per cent and Church-Yonge Corridor, down 23 per cent.

Along with location, size and building composition have impacted monthly rents since the onset of COVID-19, with larger units offering more space drawing more attention than smaller units. The average rent for four-bedroom units (primarily single-family dwellings) has increased, while the average rent for smaller units has decreased.

As we move into May, tenants are still seeking larger properties while they continue to work from home and their children learn virtually. Rentals with backyards remain particularly popular.

While monthly rents for studio, one-, and two-bedroom suites all fell by over 15 per cent annually, four-bedroom units experienced an annual increase of 10 per cent in April.  Single-family homes also experienced average month-over-month increases of 8.7 per cent.

For townhouses in April, average rent was $2,673, signifying a month-over-month increase of 15.4 per cent, the largest of all the property types.

Condo apartments were offered at an average monthly rental rate of $2,074 per month in April, reresenting an annual decrease of 11.8 per cent, while the average rent for purpose-built rental apartments was $1,895 per month, a 4 per cent year-over-year decrease.

Despite more vaccines getting into Canadians’ arms and the end of lockdowns on the horizon, the work-from-home trend looks like it’s here to stay for many workplaces in 2021. This most likely means rental rates for the smaller units in the downtown area will be slower to recover, while GTA rental rates for larger units in suburban areas will continue to be popular for the foreseeable future.

The high demand for larger properties has contributed to the lower rent levels in the GTA. These units are being leased quickly, and the number of available three-, four- and five-bedroom homes for lease is much lower now compared to 2020 and 2019.