Average rents for all property types in the GTA increased nearly a full per cent in August over July, with small rental units climbing in popularity after more than a year of pandemic-related declines. This is the fifth straight month average rents have increased, according to the latest Bullpen Research & Consulting and TorontoRentals.com rent report.

Even with the recent uptrend, the average rent is still down 4 per cent annually from $2,184 per month in August 2020, and 14 per cent from August 2019’s average rent of $2,450 per month. Despite worries about the fourth wave of COVID-19, the return to normalcy continues  with colleges and universities opening up, as well as primary schools, malls, stores, gyms, and downtown office buildings.

The majority of GTA cities and neighbourhoods experienced monthly increases in average rent in August, including Whitby, 6.6 per cent; Scarborough, 3.9 per cent; Richmond Hill, 2.6 per cent; Milton, 2.3 per cent and Mississauga, 2.1 per cent. Other cities and areas with slight month-over-month increases were: North York, up 1.3 per cent; York, East York and Brampton, all up 1 per cent; Vaughan up 0.8 per cent and Toronto, up 0.7 per cent.

“After several months of large rental units leading the recovery out of the pandemic-induced rental slump, smaller units were popular in August, with average rents for one bedroom units increasing by a whopping 5 per cent monthly in the GTA,” said Ben Myers, president of Bullpen Research & Consulting. “The market bottom is now clearly in the past, with many of Toronto’s most desirable neighbourhoods seeing average rents increase by $200 to $350 per month over the last six months.” 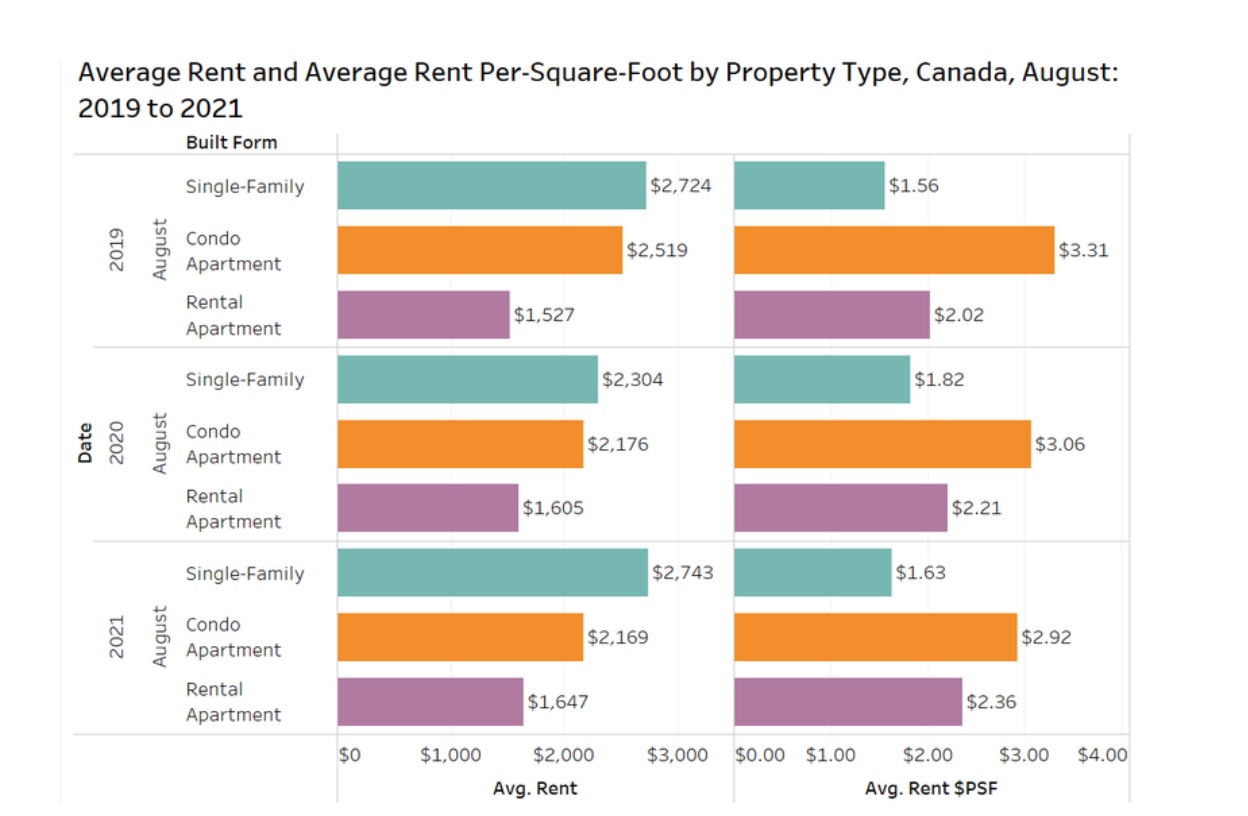 23 of 27 condo apartment projects with high activity on TorontoRentals.com in the GTA saw an overall average increase of 11 per cent in monthly rents in July and August over January and February of this year. The project with the highest increase was Axis Condos ($1,788 per month to $2,510 per month). This 38-storey building was completed in 2019 at 411 Church Street.

The average rent for purpose-built rental apartments, after declining for most of 2020, have also shown increases throughout 2021.

The average rent for apartments in the former city of Toronto was $2,094 per month in August, up 8 per cent  from the March 2021 low of $1,938 per month. The postal codes with a high average rent per square foot were clustered in the downtown Toronto area,