A much anticipated, and unfinished, addition to St. Michael’s Hospital in downtown Toronto was fast-tracked to keep pace with a fast-moving pandemic.

The Peter Gilgan Patient Care Tower was still in design mode in mid-March: patients were expected to arrive in July—the tower itself slated for completion by summer’s end. A potential surge of coronavirus cases hung on the minds of hospital staff and contractors who rushed to ready the fourth and seventh floors within weeks, making space for 33 single-patient, critical care rooms about three months ahead of schedule.

Facing the corner of Queen and Victoria Streets, of which the glass facade rises 17 storeys high, replacing an old three-storey parking and storage structure, the modern building eases into the existing facility, linking two older wings that were constructed at different stages in the hospital’s life. Since the new floors were designed for infection control purposes—accelerating them came with opportunities to create capacity as well as challenges to meet deadlines.

Urgent timelines coupled with a lack of extra equipment and supplies to fit the units equated to long waits for items like oxygen flowmeters and critical care monitors. Equipment and supplies were scouted out and harvested from existing units, says Margaret Moy Lum-Kwong, senior director of Operational Readiness, Unity Health Toronto. There was also little time to train staff and physicians on new technology, fire safety and emergency egress in the new tower.

“This required a compressed orientation and training agenda, offered at multiple times during each day over a five-day period, including the weekend prior to opening day,” she says. “Sessions beginning at 8 a.m. with the last session ending at 10 p.m. meant long days for the core groups conducting them.”

To commission the floors in one week, contractors socially distanced as they activated the mechanical and electrical infrastructure and built life safety elements to code, says Frank Panici, vice-president of NORR Architects & Engineers Ltd. Everything was a go by the second week of April.

The wide corridors on the new floors now hold a series of private, in-patient rooms, including three negative pressure isolation rooms, each with sliding glass doors that offer direct vantage points from a decentralized nurses’ station. Staff can visually monitor patients without disrupting their rest, while reducing the risk of exposure.

Large windows in every room amplify the amount of natural light streaming through. Rubber flooring reduces noise levels and worker fatigue, and ceiling-mounted patient lifts avert falls and injury. Upon entering any room, one will immediately find a hand hygiene sink; a washroom and shower are located at the head of the bed, so patients have little distance to travel within.

Since May, another three floors have opened as acute care areas for COVID-19 patients and persons under investigation. As it stands, there are now 81 beds, with more enroute as the building nears completion. 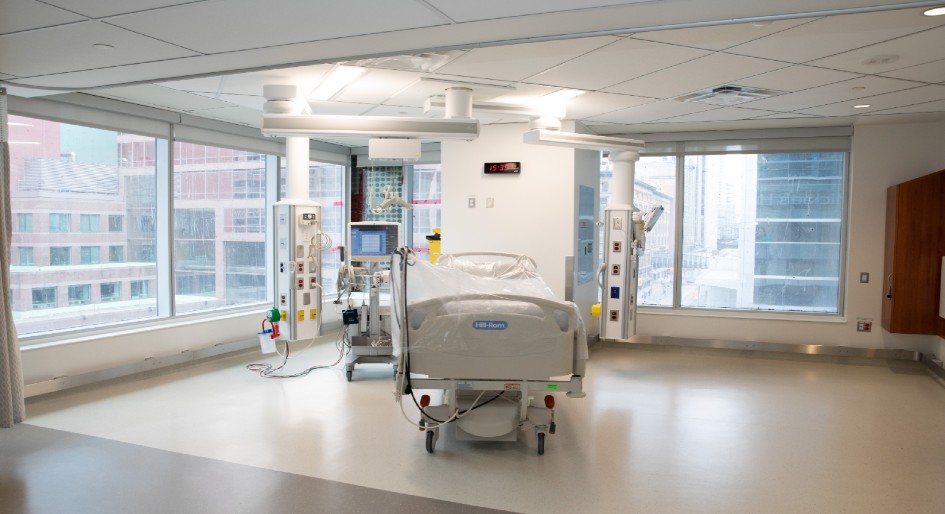 The tower is the second and largest phase of an ongoing $300-million, multi-phase redevelopment project that will also see 150,000 square feet of clinical renovations, including the expanded Slaight Family Emergency Department and more than two million square feet of infrastructure upgrades. It is intended to transform patient care in Canada, in a way likely unimaginable in 1892 when the hospital first opened with 26 beds, six doctors and four nurses.

A new main entrance to St. Michael’s Hospital is set to open at the bottom of the Peter Gilgan Patient Care Tower. Patients, however, currently access the new floors safely and horizontally, from an adjacent building isolated from the rest of the facility.

“That’s another feature built into the design and a benefit to pandemic situations where you can actually separate the floors,” says Panici. His team designed for a nine-metre grid, with a floor-to-floor structure to accommodate any future alterations to the space. Large mechanical duct shafts were moved to an atrium location, so floor needs can be re-configured in the future without affecting the rest of the hospital.

The pandemic both validates design features of the current CSA standard, which embraces learnings from previous epidemics such as SARS and H1N1, as well as reveals gaps and areas for improvement.

All in-patient rooms in the tower are single-use only—a feature the standard applauds as a means to appropriately distance infected patients. “This provides more privacy, reduced noise level and better infection control, with space for families, leading to better comfort, recovery and outcomes for patients,” says Moy Lum-Kwong.

Such a design, however, is mostly seen in newer hospitals, says Michael Keen, vice-president and chief planning officer for Unity Health Toronto and chair of the Canadian Standards Association (CSA) Strategic Steering Committee for Health and Well-Being. Only 10 to 20 per cent of single-patient rooms are found in older facilities, with the rest being semi-private, two-patient rooms or three to four beds in a ward-like environment.

“That really is a challenge,” he says. “As we redevelop facilities, moving to a more single-patient room environment will be the biggest thing to help us in future pandemics. This ability to separate patients is perhaps most important for reducing transmission.”

Acuity adaptable rooms—the ability to switch an acute care room into a critical care room with ease—allows for greater flexibility in a crisis and less movement of patients. As the team at St. Michael’s Hospital anticipated a surge, this became an important tool for deciphering where best to place patients with COVID-19.

Air system flexibility is another factor, says Keen. Twenty years ago, most hospitals in Ontario didn’t have any proper negative pressure airborne isolation rooms, which are particularly vital when intubating patients. Through SARS and tuberculosis, facilities began retrofitting to build these rooms. The standard now requires one per floor, but the new tower houses three per floor. Negative pressure rooms are not always possible in some spaces though. He says in a typical patient room it’s more of a balance of air moving in and out. Monitoring the pressure and being able to adjust the supply of air inward to the room is a key area of flexibility to enhance safety.

“That flexibility with your HVAC system is an important piece that I think we will be looking at in the standards a lot closer,” he says.

Since all rooms are grouped in a common air system, another element is ensuring air isn’t recirculated from one room to the other. Being able to adjust systems on “100 per cent outdoor air in and 100 per cent air exhausted out” is an important feature.

“Most systems aren’t designed for that because in the cold of winter or heat of summer that’s when it can be most difficult bringing the outdoor air in,” he says. “As we’re moving into the summer, we’re finding there is a burden of that heat on the system. Luckily ours have that flexibility, but that’s definitely something that needs to be considered for situations in the future.”

Specifying materials might also need a look-over. With input from the hospital’s IPAC department the design team was able to procure ceilings, flooring and furnishings that are easily cleanable, says Panici. He suspects industry will need to re-examine the chemicals used to sanitize and whether such materials “hold up.”

“I think this will spur on another conversation about how we are using these materials and are they IPAC controlled,” he said in a recent webinar. “We’re trying to balance that with the patient experience and make sure we provide exceptional spaces that can deliver care.”

Healthcare professionals across Canada are preparing for the possibility of a second wave, especially as elective surgeries resume for qualified hospitals—those with occupancy rates below the 85 per cent mark. According to Rita Mezei, executive director of the Canadian Centre for Healthcare Facilities, a lot of space was created in hospitals when the crisis initially hit, but a surge of new cases may bring challenges, especially for long-term care facilities. There is more awareness now, but knowing if facilities are better prepared “remains to be seen,” she says.

Some hospitals have erected tents in parking lots and temporary facilities; others have converted parts of different types of facilities.

“We’re fortunate that we have this new wing and flexibility and surge capacity,” says Keen. “Each facility is different and needs a customized plan to prepare for a second wave and potential surge.”

Feature photo: Rendering of the new main entrance to St. Michael’s Hospital, which is set to open at the bottom of the Peter Gilgan Patient Care Tower. Patients currently access the new floors from an adjacent building isolated from the rest of the facility. Courtesy of NORR Architects & Engineers Ltd.