New rental data for October 2020 shows that average rents are down in most large metros, particularly for smaller luxury units located in busy downtown neighbourhhoods.

Trending since the pandemic began in March, tenants have been seeking out rental units close to grocery stores and parks, as opposed to busy high density neighbourhoods close to office towers. 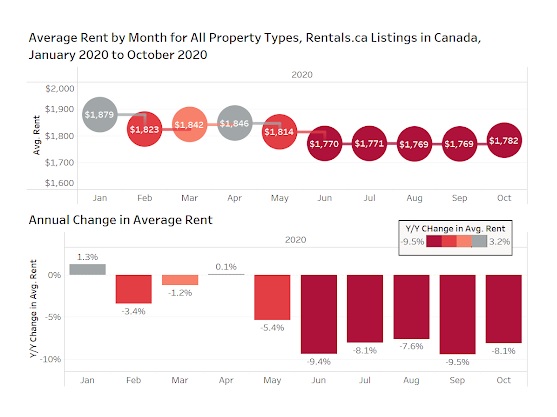 “The average rent in Canada trended up in October, which we partially attribute to an increase in new purpose-built rental apartment listings,” said Matt Danison, CEO of Rentals.ca. “We continue to see an increase in listings nationally, which tells us that supply is outpacing demand. This market imbalance suggests soft rental market conditions will continue for the rest of the year.”

North York finished first among 35 cities for highest average monthly rent in October 2020, surpassing both Toronto and Vancouver due to a number of new purpose-built apartments beginning pre-leasing programs, which pulled the average up. Month over month, average rent for a one-bedroom in North York was up 7 per cent ($1,945) and 12.4 per cent ($2,459) for a two-bedroom.

As several of Canada’s major cities continue to see declining rental rates, many secondary markets are seeing rents increase. Demand is down and supply is up overall, but demand is shifting geographically.

Data backs up the “Urban Exodus” theory in Ontario, with average rents declining in places like North York, Etobicoke, Toronto and East York, while cities such as Kitchener, Hamilton and London are still seeing double-digit rent growth with annual increases of 14 per cent, 15 per cent and 17 per cent respectively.

“The rising rents in several smaller municipalities, as well as the significant increase in web traffic on Rentals.ca in Ontario suggests many prospective tenants are widening their search area when looking for a rental property,” said Ben Myers, president of Bullpen Research & Consulting, “With many choosing to go back to where they grew up or attended university to avoid the lofty Toronto area rental rates.”

Meanwhile things are looking good in Montreal, where year-over-year average monthly rents are up 15 per cent for a one-bedroom and 9 per cent for a two-bedroom.