Layers of heritage context and grime exemplify the nuanced judgement and painstaking artisanship enlisted in the revitalization of Toronto’s beloved Massey Hall. Phase two of a $142-million, multi-year refurbishment and expansion project is bringing the 125-year-old concert hall’s obscured glories back to light, while adding supporting features and amenities that 21st century performers and audiences increasingly demand.

“A lot of things won’t change. We want the hall to feel the same for artists,” Marianne McKenna, the design architect and founding partner of KPMB Architects, told a recent gathering hosted by the Toronto Urban Land Institute (ULI) Women’s Leadership Initiative. “There will be a whole new level of ambience that complements the hall itself.”

Key elements involve: sensitively rehabilitating aging interiors, including the Moorish style plaster ceiling that has sported a wire mesh guard for the past 50 years; constructing a seven-storey addition on a newly acquired adjoining land parcel; forging an aesthetically and functionally appropriate transition between old and new structures; and restoring 100 stained glass windows, some which have been long hidden behind boarding.

With the work now beyond the halfway point, women with leading roles shared their experiences and professional insight — expressing a sense of pride and responsibility as they make an imprint on a building that is both a civic landmark and embedded in Canada’s cultural psyche.

“It’s the Holy Grail of live music,” asserted Eileen Costello, chair of the board of governors of the non-profit corporation that operates Massey Hall and Roy Thomson Hall and a partner with Aird & Berlis LLP. “An investment in Massey Hall is an investment in the fabric of Toronto.”

“People talk about the first time they went there as if it was a rite of passage,” McKenna concurred.

This project is the most extensive of a series of renovations and alterations over the years, from the 1911 installation of fire escapes to the arrival of central air conditioning nearly 80 years later. Until now, a 1933 intervention brought the most noteworthy changes. That’s when the lobby was enlarged and redesigned in the popular Art Deco style of the day and the balcony’s back riser was removed to make way for a lounge.

The hall’s configuration is almost invariably described as an “intimate” space between artists and audience. Musician and board of governors’ member Miranda Mulholland is among the few with a perspective from both sides of that cozy divide. She recalled her first visit: “My Nana took me to see Cats”; and her band’s first performance: “We felt like we were part of the hall.”

A new generation of technology brings flexibility to adjust that dynamic further. This time, via a robot-controlled retractable seating system that can literally transform the orchestra into a mosh pit. “It’s a little engineering feat of moving 600 or 700 seats,” McKenna said.

As lead heritage consultant, Dr. Sharon Vattay, a principal with GBCA Architects, is tasked with prioritizing the architectural, historical and cultural significance of the various vintages of elements — a determination that doesn’t necessarily default to the oldest version or original intent. For example, even though the ’30s era Art Deco lobby is incongruous with the overarching architectural tribute to Spain’s Alhambra Palace, it has long since come to be viewed as a defining characteristic of Massey Hall’s charm.

“That’s the one we identified as having heritage value,” Vattay said. “The value is not just in the bricks and mortar.”

Similarly, removal of the distinctive fire escape stairs, a fixture on the exterior for 107 years, was not without contemplation. “It’s a layer of history. One of the things we did grapple with at the beginning was losing that layer,” she reported.

However, the trade-off is deemed a superior solution. The glazed passerelles that take the stairs’ place will link the concert hall to the new south building, providing safe egress and giving foot traffic a previously unattainable perspective of the heritage facade and newly restored stained glass windows.

“People will be able to look at the colour of the glass and the restoration very intimately,” McKenna advised.

Inside the hall, the persistently crumbling ceiling is intrinsic to the original Moorish architectural concept and the experience within the space. It will be conserved, but with the installation of upgraded acoustical plaster stage-side to enhance performers’ audio feedback.

“The plaster ceiling is the most challenging heritage element in the hall,” Vattay reiterated.

“There was a ton of dirt up there, which probably makes the acoustics really great,” McKenna quipped.

As part of the highly skilled team of stained glass conservationists, Elise Guerra has likewise been immersed in dirty work. Accumulated soot, dust and bird droppings coated the window surfaces, marring the colours, patterns and images of renowned musicians.

“We dismantled every window piece by piece like a huge puzzle, cleaned every single piece and assembled them again,” Guerra explained. “It’s (takes) a lot of patience. But it will change everything on the building.”

Two Toronto-based firms, Eve Guinan Design and Vitreous Glassworks, shared the complex and delicate work. Glass of the same type as the original is still manufactured in the United States, partly easing the logistics of replacing broken or damaged pieces in line with the heritage restoration protocol. Where necessary, conservationists cut new pieces and, in some cases, hand painted sections that could not be matched.

“It’s what I call the jewels of the project,” Costello said. And they’ll cast their beauty in two directions. Light filtering into the concert hall will regain its 19th century tones, while, outside, dowdy plywood patches — already in place when a 10-year-old Gordon Lightfoot played the Kiwanis Music Festival — will finally come down.

Reinforcing a commitment to the performing arts

In addition to the pivotal players taking part in the evening’s discussion, women were instrumental in securing the site for the new seven-storey adjoining facility. Costello saluted her peer, Cynthia MacDougall of McCarthy Tétrault LLP, who led the complicated negotiations with developers of a neighbouring condominium tower and the city of Toronto. Under the deal, the 4,800-square-foot parcel was deemed a public benefit and transferred to Massey Hall in return for greater development density on the developers’ Yonge Street site.

The arrangement actually fulfills the benefactor’s thwarted vision. “Massey himself wanted it, but he couldn’t get that property,” McKenna noted.

In an era when every performance was unplugged, the original configuration was centred on the core functions of entertaining and be entertained. “The entire site is taken up by the auditorium and the four corner stairwells,” Vattay affirmed.

The new south building at last provides adequate space for back-of-house facilities — better accommodating casts, sets, equipment and multi-tasking during intermissions. “Like probably every woman here, I am looking forward to being able to get a drink and go to the bathroom,” Mulholland joked, in reference to the notorious scarcity of both types of services.

At the same time, the new building reinforces a commitment to nurturing and advancing the performing arts. A 500-seat-capacity venue on the fourth floor will provide a mid-sized option along with the historic concert hall and a smaller performance space in Massey Hall’s basement level Centuries bar.

Costello stressed the importance of performers’ end-user insight on the board of governors and praised their contribution to decision-making. “As an artist under the lights, looking out, you have a certain perspective on what you want to see,” Mulholland agreed. 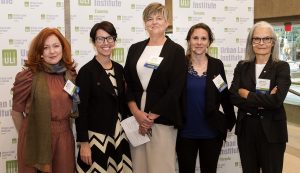 Meanwhile, a discussion billed as: The Women Behind the Revitalization of Massey Hall, happily celebrated a ceiling that isn’t glass. Participants from differing disciplines and stages of their careers had differing views of the uniqueness of the experience, but unanimously called it positive.

“I used to work in France. There, when you are on a site, you are (one of) maybe one or two women,” Guerra said. “Here, working on Massey Hall with all these women, it is amazing.”