Upon encountering OCAD University’s ‘tabletop’ structure that sits above McCaul Street in downtown Toronto, most people’s initial reaction is, ‘What on earth is that?’. Designed by architect Will Alsop in joint venture with Robbie/Young + Wright Architects, the Sharp Centre for Design, or the ‘tabletop’ as it is known, is disguised as a walking, pixelated creature that looms over the school’s main campus building and Butterfield Park below. The black and white structure, with its 12 multicoloured steel legs, has become a defining symbol for the third largest art and design university in North America.

Spending most of its first 100 years as a fine art school led by Group of Seven icons such as George Reid and Arthur Lismer, the school has evolved and expanded its offerings to include 17 undergraduate and seven graduate programs, with a student population of 4,700. By changing its name to the Ontario College of Art and Design in 1996, and then OCAD University six years later, the educational institution hinted at revolutionary changes, both philosophically and physically. The Sharp Centre, completed in 2008, clearly signalled to the world this was a place that took creative expression seriously.

With its most recent addition of CO, short for ‘company,’ OCAD University has ventured for the first time beyond its main campus located within the neighbourhood of Kensington-Chinatown. According to CO, there’s a lot in just two letters, which express collaboration, community and co-design. This executive studio uses creative problem-solving to drive change, offering creative knowledge and capabilities to industry leaders and their organizations. CO is helping them to future-proof themselves and de-risk innovation opportunities.

CO is also home to the Imagination Catalyst, an entrepreneurship and commercialization hub that supports emerging companies committed to design-driven products and services. By offering the value of its design-thinking to the business market, OCAD University is ensuring its ability to grow and thrive in a time when government support has become unreliable. Since opening in 2018, CO has beaten budget projections by three times. The facility is expected to generate 15 per cent of the school’s operating budget by 2023.

The university’s latest venture is located in Daniels Waterfront City of the Arts complex on Queen’s Quay, which combines residences with arts-based businesses and non-profits. At just under 14,000 square feet, the space is relatively small considering its objectives; however, its proximity to like-minded organizations, fully glazed windows that reveal breathtaking views of downtown and the lake, and abundance of natural light made the location appealing.

OCAD University asked Toronto-based architecture and interior design firm, Quadrangle, to create an interior with flexible features that can be adapted to a variety of activities and change with CO’s business model over time. The firm went beyond this to bring the character of the iconic ‘tabletop’ into the design.

The playful, architectural solution provides a series of spaces that can be treated as modules to accommodate everything from intimate, individual work to large-scale public events. The long and narrow space has four ‘innovation studios,’ seven open collaboration spaces and six closed meeting spaces for up to 22 people. There is a dedicated audiovisual equipment cage and a large workspace for CO staff that overlooks the soon-to-be completed east-west pedestrian mews, known as the City of the Arts ‘Yard.’

Level with the steady stream of traffic along the eastern Gardiner Expressway, CO feels urban and connected to the city. As visitors step off the elevator onto the fourth floor of the building, their gaze is channeled to the interior by a warm wood wall treatment that transitions to an orange, sculptural punctured ceiling. The threshold from this intimate entrance to the wide-open transit space is populated with counters in varying heights for both functionality and accessibility. A deep blue kitchenette forms a natural hearth for the open space, with its bright red cappuccino maker inviting visitors to linger and sip a cup of coffee.

Flooded with natural light, the Transit Zone can comfortably accommodate large groups; folding partitions can also transform it quickly into a suite of smaller innovation studios. Photo by Adrien Williams.

The character of the ‘tabletop’ is felt through strong colour blocking, as well as in the details, such as the black and white pixelated patterned tile in the washrooms and on the code-required vision strips. The colours also help to demarcate various meeting areas as most of the users are new to the space. The almost 16-feet high ceilings provided the opportunity to create areas of intimacy and grandeur, depending on the location.

An intimate ceiling height can be found at the entrance and in small rooms, such as phone booths; a median height was used along the long connecting spine to accommodate centralized lighting, mechanical equipment and cabling lines; and the full height was kept in large studios and transit space to allow for the maximum amount of natural light. Floating wood ceilings in the innovation studios keep voices isolated within each space and discretely integrate audiovisual, mechanical equipment and lighting. 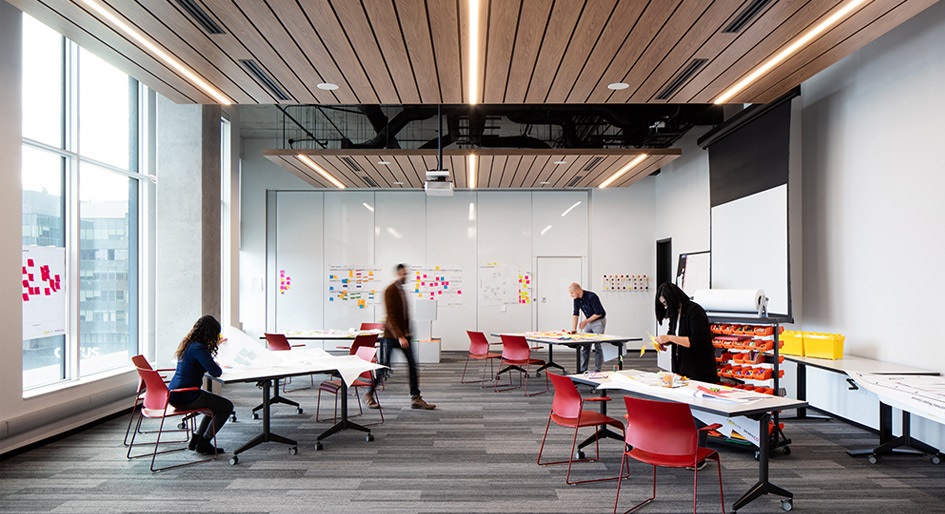 Maximizing flexibility, three southern studios are outfitted with operable walls that allow the rooms to be combined with the open collaboration zone, which comprises 75 per cent of the overall facility, into a single event space more than 165-feet long. Carving two feet from the base building mechanical and electrical rooms allowed for the creation of wall niches with drop-down desks for private or shared study.

The design thinkers and researchers who now call CO home are convinced the striking new interior is a key factor in the success of their new businesses. Their clients, leaders in private development and public policy, consistently note the interior balances both creativity and professionalism. These same clients acknowledge the positive outcomes of their facilitated sessions are enlivened by the nature of the space.

Caroline Robbie is a principal at Quadrangle, where she is responsible for the interiors and content media teams. Caroline’s relationship with OCAD University began in 2000, when she was the lead interior designer on the Sharp Centre for Design. Quadrangle is one of Canada’s most dynamic design and architecture firms. In February, it joined forces with leading U.K. practice BDP to broaden its expertise and resources, and fuel further client value, growth and development.

Feature photo by Adrien Williams: Upon entering the space, users are greeted by the letters CO, seven feet high and bright pink against the cityscape.