The changing of the seasons, from summer to fall, signals the school year is in full swing. At post-secondary institutions across the country, hallways are abuzz with chatty scholars bustling to and from classes, cafeterias are brimming with ravenous students and the excited exchange of ideas, and campus libraries and study rooms are filled with the low hum of quiet conversation.

But on Oct. 16, just six weeks into the fall semester, school sounds at colleges across Ontario fell silent. At a time when students actively begin prepping for midterms, they were instead at home sidelined by a strike. Talks between the union representing faculty at the province’s 24 public colleges and the College Employer Council broke down the night prior, putting more than 12,000 full-time and partial-load instructors on picket lines and the academic year indefinitely on hold.

Though schools were effectively closed that Monday, operations didn’t completely cease. Inside campus walls, administrative staff tended to business as usual in what was now a serene setting. At Humber College, Spencer Wood missed the hustle and bustle of working at an active school site; however, the director of facilities management was quick to admit the absence of the school’s 30,000 students made his job easier.

“We’re able to work in spaces during the day that we otherwise wouldn’t be able to if classes were in session,” says Wood.

A fixture at Humber for nearly 20 years, serving in multiple roles throughout his tenure, Wood currently oversees facilities management at the school’s North and Lakeshore campuses, as well as leads strategic initiatives related to his department. He and his team of approximately 50 in house staff are responsible for providing a safe, clean, healthy and properly maintained environment that supports well-being and promotes excellence in teaching and learning. This is more easily achieved since the introduction of software platform Archibus in 2015. The new integrated workplace management software enables Humber staff and academic professionals to submit and track work order requests for repairs, cleaning and other general building operations concerns.

Still, it’s no easy feat maintaining the college given its sheer size – 3 million square feet spread over two campuses – and the geographic location of both sites (a 30-minute drive apart, depending on traffic), so the school contracts out a number of services, including cleaning, snow removal and grounds maintenance, to name a few.

Contracts are typically put up for tender every five years. The college solicits competitive bids for services through written proposals. Humber has established guidelines that reflect its high-quality standards and outline the school’s value, price, delivery and safety requirements. Contractors are chosen through an open, fair, competitive and non-discriminatory process. Each bid is evaluated based on the technical response, including qualifications and references, and then price, explains Wood.

“Normally, the split is 70-30,” he continues. “We first assess the technical knowledge and then look at cost. If there are five bidders, for example, we rank them before opening the pricing. So, while the best contractor is the cheapest in an ideal world, that’s not always the one that wins the bid since we’re looking more at value than lowest price.”

However, expenditures have become a major talking point of late, driven by the Ontario government’s decision to raise the minimum wage to $14 an hour in 2018, and $15 an hour by 2019, which equates to an increase of 23 per cent in 15 months. (Currently, minimum wage is $11.60 an hour.) Wood says this jump will cost the college an additional $130,000 a year for the duration of its cleaning contract alone. Other contracts will also be affected, given that many were signed years prior to, and without knowledge or expectation of, the government’s minimum wage hike announcement in May.

“The cleaning contractor can’t absorb this type of increase because their contract is essentially all labour other than cleaning supplies, so Humber will have to pay the difference,” says Wood.

Going forward, however, Wood says the college will examine whether to include a wage rate price adjustment clause in its contracts, whereby the contractor will incur any costs related to a minimum wage increase, and/or give price greater consideration in the bid evaluation process, so long as it doesn’t impact quality of service. 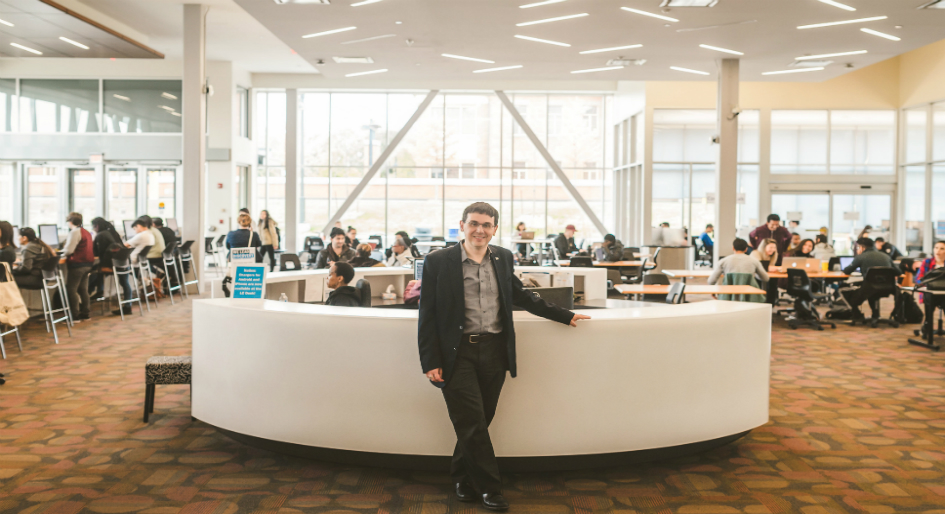 Humber isn’t the only post-secondary school faced with assuming the burden of the cost increases related to the province’s planned minimum wage hike. And like most education institutions, it’s under budgetary pressures and has been for quite some time. To save money long-term, Humber has invested in a number of energy conservation initiatives that align with its sustainability goals to minimize the college’s environmental impact and greenhouse gas emissions, and help conserve the world’s non-renewable energy resources.

“Our goal is to become a Canadian leader in energy efficiency,” says Wood, who is a certified energy manager, or CEM, a designation he earned in 2001 from the U.S. Association of Energy Engineers.

Since 2005, Humber has reduced energy consumption by 11 per cent while retiring deferred maintenance, cut down on greenhouse gas emissions by 17 per cent and decreased water consumption by 50 per cent. At the same time, the school’s student population has increased by 48 per cent and floor area by 23 per cent. Humber’s target is a 50 per cent reduction in energy usage by 2034.

To help achieve this objective, “We performed building envelope projects on four buildings at the North campus this past summer, essentially changing all the windows to triple pane and reinsulating or adding five inches of insulation to the buildings to reduce air infiltration,” says Wood. “The results aren’t in yet because we haven’t gotten to winter but the models are saying we’re going to save about 30 per cent of the heating energy.”

Wood’s department is also in the process of installing more than 700,000 square feet of new LED fixtures with wireless controls across both campuses. When complete, Humber is expected to save more than 60 per cent on lighting energy.

On the water front, the school has changed all urinals to 500-millilitre models and most washrooms now have motion-sensored auto shut-off taps. In 2014, facilities management partnered with the Humber student federation Ignite to install 100 new water refill stations across the Lakeshore and North campuses. According to built-in meters, the initiative has resulted in the avoidance of the use of more than 2.1 million plastic bottles to date.

Humber is also continuously working to reduce, reuse and recycle. Every year, the school conducts a waste audit in order to better understand its waste streams and improve the management of its waste. In 2016, the school diverted 63 per cent of its waste from landfill. The goal is to achieve 70 per cent by 2019.

But of greater interest, at least according to Wood, is how the college is tying key concepts in sustainability into core course content to affect long-term change. While generally not a facilities management role, this task falls under Wood’s leadership. He and his sustainability staff take time to educate students and faculty in various programs on how they can be more energy-efficient in their future careers.

In hotel management, for instance, one of the most environmentally impactful areas of operations – laundry – can be improved by using lower temperature settings for the wash cycle, investing in Energy Star rated appliances, installing laundry ozone systems, and so on.

“If Humber reduced its energy usage to zero tomorrow, the impact would be relatively small in the grand scheme of things,” he says. “But getting at those students so that they bring sustainability with them when they go off and find employment, that could change the world.”

Something Wood is looking forward to resuming now that the strike is over and classes are back in session.