AMPED Sports Lab and Ice Complex in Ottawa, Ontario, is a one-stop facility for hockey development, training, and treatment. The facility caters to elite athletic training, as well as recovery and treatment of injuries or chronic problems. It houses a physiotherapy clinic, a 4,000-square-foot gym, and a 120-foot by 65-foot ice rink. And, most recently, the facility became the first Zero Carbon Building Performance Standard certified arena—achieved through the Canada Green Building Council’s Zero Carbon Building Program. Modern Niagara, a national contractor and building service provider, led AMPED on the journey.

For context, limiting the building’s impact on the environment was the primary objective. Initially, the set goal was to reduce the overall energy consumption in the building by at least 40 per cent. This smart goal would drive the strategy for designing the building’s mechanical, electrical, and building technology systems. A project timeline was established to account for benchmarking, design, installation, and measurement. To help fulfill the objective while limiting costs, the project has qualified for two sources of government funding, the Climate Action Incentive Fund and Save On Energy, with a combined value of up to $265,000.

To benchmark the building’s energy use, detect faults, and collect energy use data over time, the team installed an electric metering system, implemented a cloud-based, real-time data monitoring solution, and upgraded the building automation system. In the meantime, the team began to brainstorm and weigh the costs and benefits of a variety of energy conservation measures that would shape the design of the new building systems. The options that were initially brought forward to help achieve the goal included installing a CHP system, reclaiming heat from the ice plant, retrofitting the lighting, and installing rooftop solar panels with battery storage. 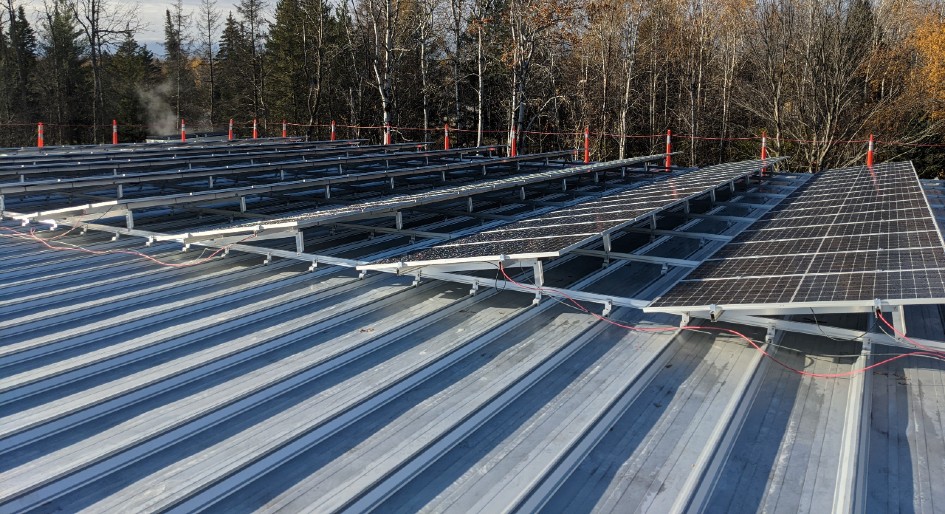 To ensure that the ideas put forward would result in a 40 per cent reduction in energy consumption, executive leaders in renewable power generation and energy storage from engineering firms escorted the team through a technical deep dive.

From their insights we learned that batteries are expensive and would only be useful in the event of a loss of power at the scale and cost we were contemplating For a facility of this type, the most beneficial strategy was to tie into the existing electricity grid via a “net metering” connection where the grid becomes the “battery” for storing energy produced by the solar panels when the building does not need the volume of energy being produced. With this information and to overcome this challenge, installing a CHP system would no longer help achieve the goal.

It was concluded that the initial design’s costs and prolonged timeline far outweighed its benefits. The team explored other ways to limit the building’s impact on the environment and set a new goal: to eliminate as much carbon-based energy consumption as possible and move towards a zero carbon facility.

This could be accomplished by targeting the areas of the building that consume natural gas, which is a fossil fuel and consequently emits the highest amounts of carbon into the atmosphere at this facility. Those areas are the ice rink dehumidifier, the domestic hot water heater, and the rooftop air handling units. As part of the new solution, custom AHUs were manufactured through a design process involving the VRF supplier. In the meantime, the existing dehumidifier was switched from a desiccant wheel made up of a corrugated solid material that absorbs moisture to a liquid desiccant in the form of a counterflow of air blown through a waterfall over a media material.

As the work begins to take shape, data on energy use throughout the building continues to be collected and evaluated, with the overall goal to eliminate natural gas consumption and ultimately limit the building’s impact on the environment.

Kevin Spencer is vice-president of energy solutions at Modern Niagara