A 10-day expedition through the small communities of Nunavut. Visiting the homes and studios of Indigenous artists and elders. Taking in the Arctic landscapes of Cape Dorset, Rankin Inlet and Pangniqtuuq. It was a trip that helped inspire Qaumajuq, the new centre for Inuit art at the Winnipeg Art Gallery (WAG).

Qaumajuq, meaning “it is bright” or “it is lit” in Inuktitut, opens this week, but the 40,000-square-foot addition has been almost a decade in the making. Back in 2013, the project team including WAG’s Director and CEO Stephen D. Borys and architect Michael Maltzan, who won the contract through an international competition of 125 submissions, travelled to the Arctic to gather ideas. From there, the design evolved, grounded in the land, light and peoples of the North.

“Their relationship to the landscape, the dynamic of the seasons, it all kept feeling to me like it wasn’t a constrained, linear culture, but one that had a great deal of fluidity in it,” says Maltzan. “The building is trying to capture some of that spirit.”

Forms of contemporary Inuit art are constantly evolving in scale and medium, from paper and weaving to video art. Maltzan, who is based in Los Angeles, intended to disrupt the typical ways in which art of the North is displayed, creating spaces that will serve a new generation of Inuit artists. “There’s been an argument that art looks the best and feels most alive in a space that is similar to the studio space in which the art was created,” he says. “For Inuit art the studio has been the North itself, in its vastness, scale and light.”

“It doesn’t have the traditional four silos and four corners of a gallery,” Maltzan observes. “It feels much more fluid and is likely going to give each of the subsequent shows that happen their own personality.”

Together, the interior spaces, the natural light, the vistas within, complement the scalloped fluidity of the white granite façade, which was intended to “engage playfully” with the Winnipeg daylight and connect seamlessly to the original WAG building, designed in 1971 by Gustavo De Rosa.

Much time was spent searching for a design that would be a strong presence on its own, in contrast to the sharper, prismatic forms of the WAG. “The two buildings together form a more complete assemblage with a strong urban public front on every side of the block,” Maltzan adds.

Upon approaching the building, the public is immediately pulled into the life happening inside. A goal for the new gallery was to create a more transparent and accessible experience, which is partly fulfilled with the addition of a three-storey visible vault that holds close to 5,000 Inuit sculptures, located on the ground floor entrance hall.

It’s the largest of its kind in the world, says Borys. Unlike other museum vaults that are tucked away in basements, off-site and secured, patrons get to observe and digitally engage with the artifacts.

“This is a very secure space; it’s climate controlled but very visually accessible, and the way we can do that is because a large chunk of the Inuit collection is stone and stone is resilient with light,” he says. “It’s a way for the audience not just to see thousands of artworks, but you can also see curators working within the space.”

As Maltzan notes, there’s been an increasing trend in making hidden collections much more a part of the visitors’ experience, that plausibly started in the 1970s with Arthur Erickson’s Museum of Anthropology in Vancouver. “I think the most forceful, most dynamic presentations of a collection are [presenting] them right at the front door of the museums,” he says. “The visible vault space you can see from the outside; you don’t even have to enter the centre to get a sense of the art.” 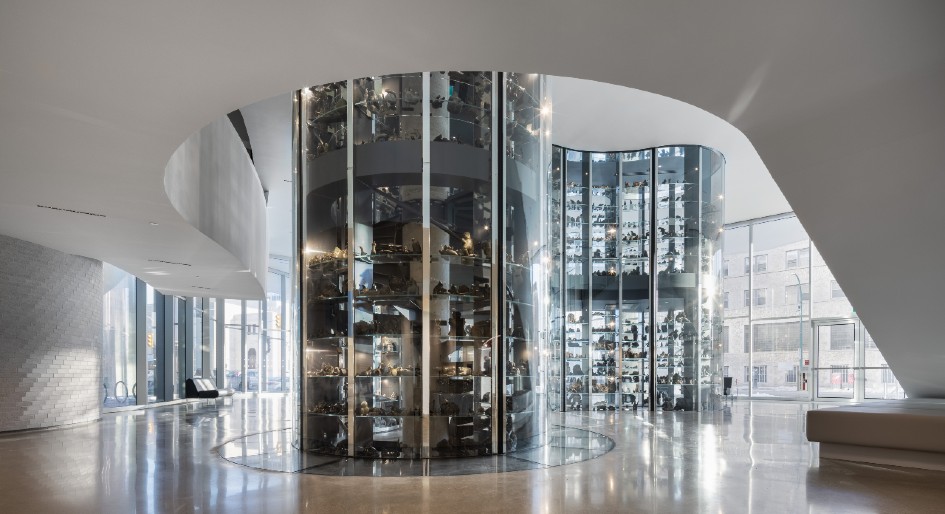 The visible vault rises two floors above the entrance hall and one floor below ground where a storage facility is located. Photo by Lindsay Reid

Overall, the WAG houses the largest public art collection of Inuit art in the world, with close to 14,000 objects and another 7,400 on long-term loan from the Nunavut government. But before the $55-million addition, at any given time, less than 10 per cent of the collection was ever on view and exhibited within a more colonial-formed structure. “When you’re able to dismantle some of the structure and ideas and formats in which you presented a culture, it’s kind of liberating,” says Borys.

As Qaumajuq evolved, it became more than a building, but rather a cultural venue for Inuit in Canada and a platform for their voices. What started out as a design project also became a response to the 2015 Truth and Reconciliation Commission’s calls to action, with guidance and decolonization work from the WAG’s Indigenous advisors, its name bestowed by an Indigenous Language Keeper Circle that was inspired by the light pouring into the new centre.

Qaumajuq programming bridges the South to the North, with an 85-seat Learning Steps Theatre in the main hall. The smart classroom will connect kids in Winnipeg to those in Rankin Inlet and other communities in Nunavut for lectures and performances.

A few other features are a research library and archives and new sun-filled art studios and classrooms on the penthouse level and rooftop that move beyond standard studio programming. Spaces include a clay studio, digital media studio, kiln room, and two exterior studios for summer and winter activities, such as stone carving and ice sculpting.

“Every once in a while, I find it’s a perfect kind of storm, where you have a designer and an architect; you have a patron or owner and a project, and they come together and there’s a synergy; there’s a way we work together that’s much greater than what we would have done separately,” says Borys.

“This design really reflects many, many visions and voices, which is exciting, and clearly the Inuit had a very strong voice and input.”

Qaumajuq is located on Treaty 1, the original lands of Anishinaabe, Ininiwak, Anishininiwak, Dakota, and Dene peoples, and the homeland of the Métis Nation.