Imagine. That is the word, in bright mosaic colours, greeting patrons inside the north entrance of the newly renovated Stanley A. Milner Library—the Edmonton Public Library’s flagship branch. Located in the city’s downtown core, the building is a token of what a civic centre can become—a place for equity, inclusion and barrier-free access to knowledge, according to Edmonton Mayor Don Iveson who spoke at the opening last fall.

“Truly public spaces where everyone is welcome without barriers are getting rarer and rarer, but this city believes we need more of those spaces, not less,” he said.

One of the library’s most celebrated new features is Thunderbird Lodge, an intricately-crafted Indigenous gathering space designed in consultation with local communities and Cree elders Jo-Ann and Jerry Saddleback. As an act of reconciliation, it brings access to culture for indigenous cultural practices, while demystifying ceremony for all groups of city-dwellers.

Stephen Teeple, of Teeple Architects who designed the library alongside Stantec, notes it was also built with its own special mechanical system to enable a true smudging space. “I think it’s the only space in Edmonton where smudging is built right into the space; you can literally smudge there anytime,” he says, adding that it’s also “acoustically amazing.” 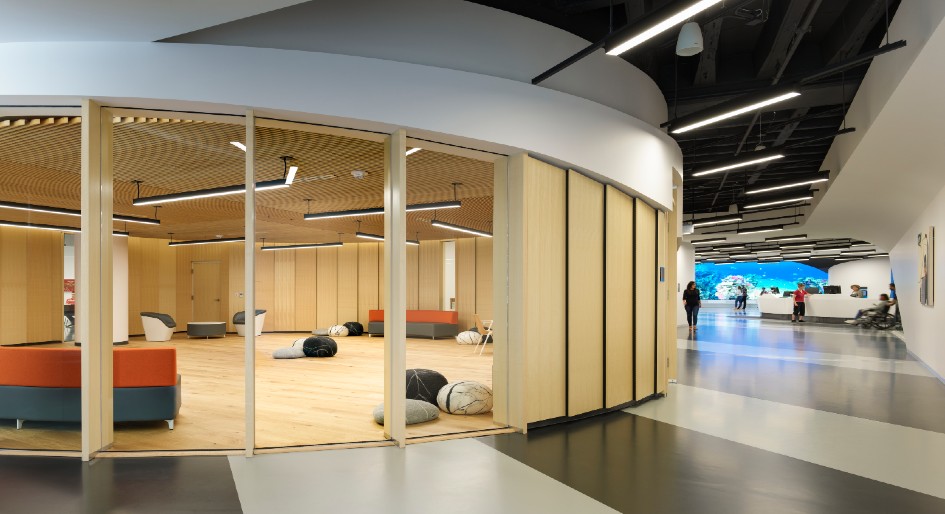 Another hard-to-miss feature is the Shelly Milner Children’s Library, relocated from the north side of the building to the south side where it overlooks and opens onto Centennial Plaza so natural light can pour in. Now three times larger than its previous space, Teeple refers to it as a “mini version of the big library,” as it is more multi-functional; there are numerous programs for kids, including a maker space with 25,000 pieces of Lego. On one wall, 54 art pieces form into a collage of mountains and oceans and see-through aquariums. A daycare is currently under construction.

Other key features include a gaming room, a teaching kitchen, the addition of 70 public computers, large galleria spaces, a café, and an adult maker space for programs like music, carpentry and 3D-printing. Towering above is a two-story interactive simulation wall made up of 278 digital screens, serving as both a communications and learning tool to engage library-goers. 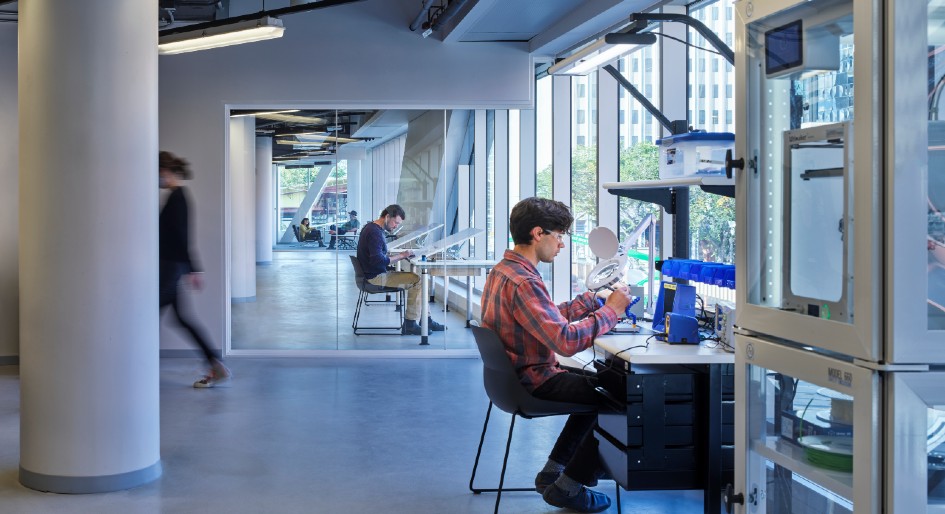 Near the stacks—currently housing a collection of 150,000 items—fuchsia, lime-green and blue chairs circle around low tables in lounging areas, brightening up an already light-filled space.

Outside, the exterior reflects much of what the library reboot set out to do.

“The vision of the building is to stretch the library out into the city—to draw people into this wide variety of services. When you enter the building, you see up through to a new atrium and it leads you where you want to go—to all these exciting dynamic community services,” says Teeple. “You can see in the building skin how the envelope stretches off the original static box of the original structure.”

He refers to the interior and exterior as “reciprocal equals.” The stretching of the building skin out into the city and the dynamic folding toward the corner create the interior atrium, drawing people inside. The exterior is also laden with 396 more windows than before. 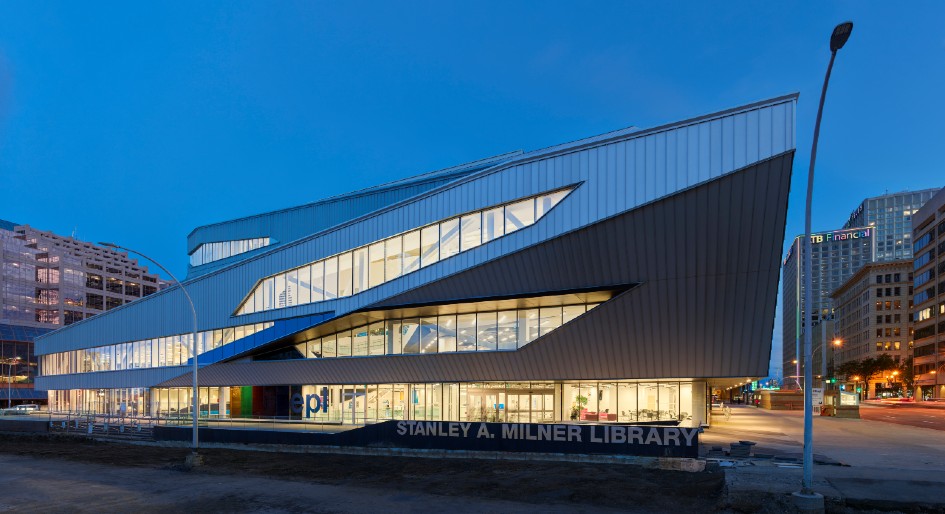 “The fact that it’s a seismic upgrade of an existing concrete structure with all new mechanical and electrical systems is super challenging,” says Teeple. “You’re working within a lot of resisting constraints, and to really reimagine it is pretty challenging— to truly transform it into a new space appropriate for today.”

The library first opened in 1967 as Edmonton’s Centennial Library and was given its current name in 1996. Over the years, it housed everything from a petting zoo in a children’s library to a smoking room shut down in the 1970s, according to one Edmonton Public Library board member who knows its history well. When it opened, a library card cost more than it does today: adults paid a quarter and a child’s library card cost five cents.

In 2015, the city reached out to its citizens, asking them what they wanted in a renewed downtown library. People wanted a “destination, a place to hang out and spend time, a place to create, to borrow library materials, to collaborate, to learn and incubate new ideas—most of all, a place to connect and feel part of something bigger,” Edmonton Public Library CEO Pilar Martinez said during the opening ceremony.

Many of these ideas transpired within the $84.5-million renewal, replacing the small windows and dense floor plate, the dark and isolated spaces of the past. New connections come in many forms—through programming and through the library’s intuitive and accessible circulation paths.

“What it brings is a natural wayfinding, so the moment you enter through the door, your eye is led on a path leading to all the various services,” adds Teeple. “It’s a very intuitive building, even though spaciously it’s very diverse, very rich and seemingly quite complex.”

Currently, all Edmonton Public Library locations are closed for in-branch visits to help limit the spread of COVID-19. As restrictions are lifted, the new design will help support protocols for limited patronage until it is fully open.

“It was designed before the pandemic unfolded, but it works well as a much spacious facility with lots of room for people to maintain social distancing and have their own nook in which they can read,” says Teeple, adding, “the pandemic will come and go; the library will stay.”