Municipal rental rates continue to rise in major markets across Canada, according to the latest Rent Report from Bullpen Research & Consulting and TorontoRentals.com. In the GTA, average monthly rents for all property types increased 0.9 per cent in September to $2,116 from $2,097 in August.

The most expensive market in Q3-2021 was Vancouver, B.C., where the average rent came in at approximately $2,625 per month, representing an annual increase of 14.3 per cent. The average rent in Vancouver also increased by 15.7 per cent quarter over quarter from Q2-2021. 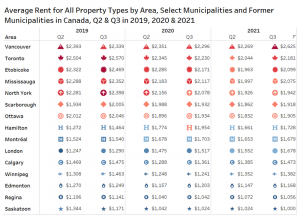 The average rent in the GTA has shot up from the lows in March 2020 and are projected to keep increasing through the last quarter. Four-bedroom units had the highest increases of the market—a result of tenants’ desiring more space as many continue to work from home.

The past two years affected all segments of the rental market except townhouses, which maintained a steady rate since 2019 with sharp increases during the more recent months.

Visit www.rentals.ca for the complete report.