With August rents in Canada down 7.6 per cent annually, experts agree that the lower demand is a continued reflection of several COVID-related factors, including: job loss; a decline in immigration; virtual learning as post-secondary classes resume; and young professionals moving back home with their parents.

According to the latest rental report from Rentals.ca, August rents were also impacted by the fact that more employees are working from home, allowing them to move away (or consider moving away) from the more expensive downtown rental markets.

“The average rent for all property types in Canada remains flat, but rental rates for the most expensive central properties in Toronto, Vancouver and Montreal continue to decline,” said Ben Myers, president of Bullpen Research & Consulting. “Despite the lower rent levels and incentives offered by landlords recently, there is less financial motivation to move during a pandemic, especially with Ontario freezing rent hikes on all rent-controlled properties for 2021. The lifting of COVID-19 eviction bans in several provinces could lead to further supply hitting the market and further depressing rent levels.” 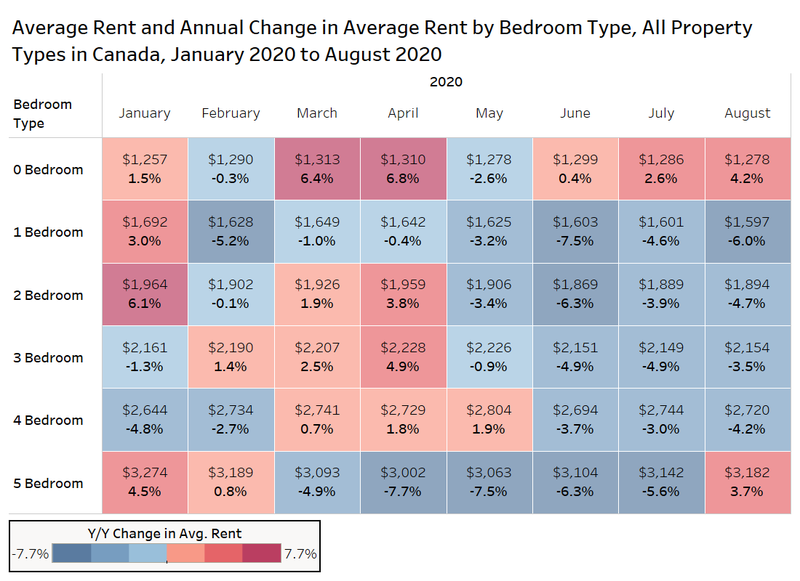 At the national level, average monthly rent for a one-bedroom unit in August was $1,597, almost $100 cheaper than the average recorded in January. Toronto continues to lead Canadian cities for highest average monthly rent for a one-bedroom unit at $2,013, a number that has dropped for the sixth straight month. Eight of the top nine priciest cities and areas for renters are located in the Greater Toronto Area, with 12 of the top 14 most expensive cities being in Ontario.

Meanwhile, Vancouver took the top spot again for average monthly rent for a two-bedroom unit at $2,709.

Kitchener led the way for year-over-year growth for average monthly rents for rental and condominium apartments among major municipalities in Canada at 14.6 per cent.

Three Quebec municipalities, Montreal, Gatineau and Quebec City, have seen growth of 14 per cent, 10 per cent and 5 per cent respectively, contributing to the large rent growth in the province.

Elementary schools are also important to tenants in the Toronto CMA, taking the top ranking, with day care ranking eighth.

“Interest in living near a grocery store is the highest it’s been since Local Logic started reporting these numbers in March — higher even than peak pandemic,” said Guy Tsror, data scientist for Local Logic. He said in Montreal, there was a 28 per cent increase in the past three months, from just under 11 per cent of renters looking at nearby grocery stores in May, compared to almost 14 per cent in August.

Other takeaways from the September National Rent Report: