When the clock tolled midnight on Jan. 1, it ushered in a new year with wishes that it be a happy one. For many, 2017 is cause for celebration as Canada marks 150 years since Confederation — a momentous occasion being commemorated with countless events across the country. While no party will come close to the multiday birthday bash in terms of grandeur and participation, many others are being planned with the same heart and soul. At United Services Group, senior management is busy brainstorming how to best celebrate four decades in business with its dedicated team of more than 3,500 employees, and long-time partners and clients.

“We are extremely thankful and grateful to our customers. United wouldn’t be where it is today without their support and trust,” says Milan Kroupa Sr., who founded the company (originally United Cleaning Services Ltd.) in Toronto in 1977, on a shoestring budget. “I started with absolutely nothing. It was just me with one truck.”

Milan first connected with the grocery giant while working at Gordon A. McEachern Ltd., which, at the time, was one of the biggest janitorial service contractors in Canada. It was here, while serving as the company’s chief manager of operating systems, that Milan decided to branch out on his own, though the entrepreneurial bug had bit him at a much earlier age.

Milan was born and raised in the former Czechoslovakia, where he was set to one day inherit the family’s flour mill — a successful business his father built from the ground up. However, Milan’s dreams were dashed at the age of six when, in 1948, the property (along with the family’s sawmill) was confiscated by the occupying communist regime.

“I couldn’t understand because my father had told me that one day I would get a part of that fortune,” says Milan. “He tried to explain that the situation had changed and the flour mill no longer belonged to us, but all I could do was shout, ‘Why did you give it to them? That belongs to me!’”

Sadly, Milan’s father was arrested shortly thereafter on erroneous charges and jailed as a political prisoner for almost two decades.

These harrowing events, along with living years under totalitarian rule, played a pivotal role in Milan’s decision to illegally flee his homeland in pursuit of a better life for his family — one where he’d be free to follow in his father’s entrepreneurial footsteps.

In 1968, Milan immigrated to Canada with his new wife and three-month-old son, armed with little more than his father’s sound advice. He told Milan there are as many opportunities in life as there are stars in the sky, and the secret to success is to seize one and never let it go.

Before long, Milan settled into his new hometown of Toronto, and found work as a lathe operator in a plastics factory. However, he soon found his ‘salary’ was not enough to provide for his family beyond their basic needs. To supplement his income, Milan took a second job with an office cleaning company. It’s here, while working 5 p.m. to 12 a.m. seven days a week, that he made an important discovery.

“I really enjoyed cleaning,” he says with enthusiasm. “After a while, I realized cleaning offered the independence I was looking for and I might make a good business out of it.”

But instead of jumping into the industry full force, Milan decided to bide his time and worked at several firms in the maintenance services sector over the course of the next nine years. Then, at age 35, he made his move.

Within a year of launching United, Milan knew he was on to something big. The company had quickly grown from one client to 30, including Loblaw, thanks in part to his golden rule, “Do to others what you would like them to do to you.”

From the start, United has viewed its customers as family and treated them as such. This involves being open and honest, delivering on promises and providing a quality of service second to none.

“We’ll go above and beyond for our clients,” says Milan’s youngest son, Michael, who is now the CEO after taking over the company’s reins in June 2015, when Milan retired (though he remains on as chairman of the board).

The company’s unwavering commitment to putting customers’ needs first has factored enormously into United’s growth, as has its penchant for flexibility.

“It was a couple existing core clients that aided in our expansion outside Ontario,” notes Michael. “As their businesses flourished, they wanted a reliable, consistent cleaning contractor that operates with integrity to grow with them to ensure the high level of service they’d become accustomed to. We were obviously all too happy to oblige.”

With its move into other regions — Quebec (1998), Atlantic Canada (2005) and Western Canada (2009) — United expanded its customer base and stronghold in specific industry sectors (85 per cent of its business today is from the retail market). Soon came the desire to diversify the company’s service offerings, again at its customers’ request. While United’s core business continues to be janitorial, the company offers a bevy of facility maintenance services, including snow removal and landscaping, parking maintenance and grounds care, as well as supplementary offerings on an as-needed basis. 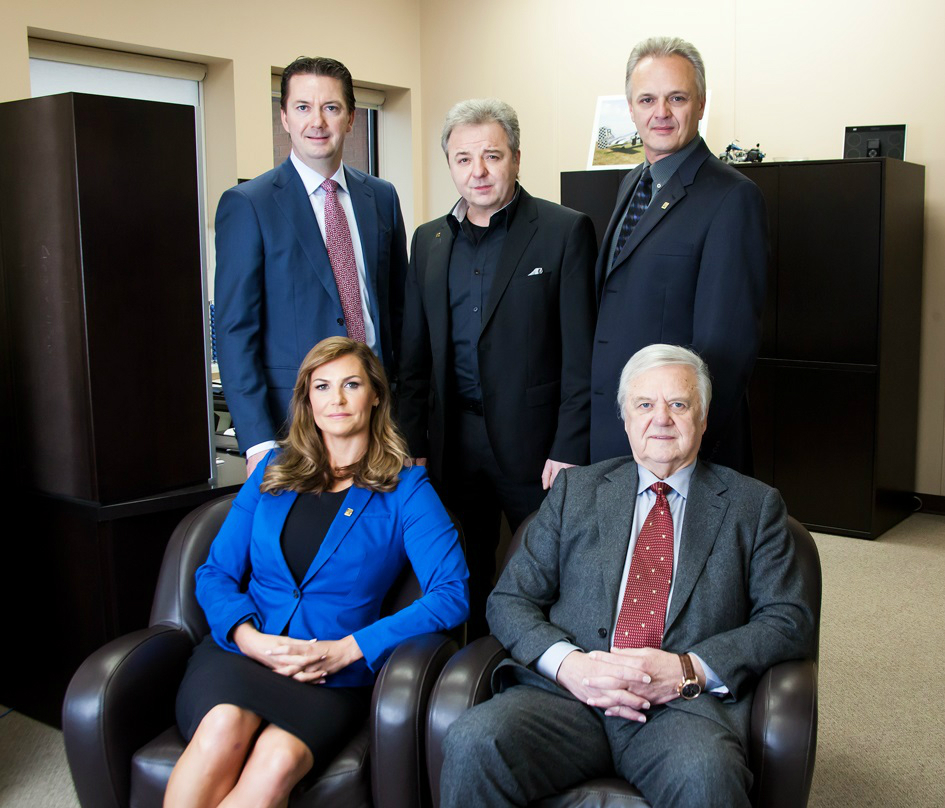 Last year, the company went a step further in supporting its customers’ needs with the introduction of a line of exclusive products. Of note is the Pod System, a restroom deodourizing system that United has sole rights to in Canada. Comprised of four pods, the system freshens the air with natural fragrances while eliminating odours by cleaning urinals, toilets and drainage pipes.

“It helps remove rust, bacteria and uric acid buildup in the pipes, which is what causes the odour,” explains Michael. “This can potentially save customers plumbing costs as the system, when used over time, fully restores drainage pipes to their original state.”

United happened upon the innovative system while attending a trade show in Europe. The company has made a conscious decision to seek out unique products at industry events worldwide that it can establish in Canada to add value for its customers. But before United launches a product, it’s rigorously tested by the company’s in-house research and development department.

And it has certainly paid off.

In 2016, United adopted Salesforce. The cloud-based software gathers and manages critical client information in one place, which helps every part of the business — from human resources, finance and acquisition to compliance, quality, and health and safety. It also keeps track of tasks and performance, and enables users to generate reports and dashboards to provide clients with complete transparency. Further, mobile integration allows for customer correspondence on the go, which means field operations are more productive and responsive.

Around the same time, United deployed Tennant Company’s IRIS Asset Manager across more than 100 of its automatic floor scrubbers. While the software platform was originally adopted because equipment kept disappearing — the ‘smart’ technology can identify and locate missing machines thanks to geofencing — it allows United to deliver visual and measurable impacts to customers. Managers receive daily and weekly reports of scrubber usage per location, which is used to illustrate “we’re doing what we say we’re going to do,” says COO Larry Ker.

“It guarantees our in-store teams are washing floors as they should,” he continues. “If a machine has not been used for the designated time frame, IRIS sends a critical e-mail alert.”

IRIS has proven so effective in such a short period of time that United is considering deploying the technology more broadly in its business.

Future plans also include investing additional resources in the company’s condominium, office and healthcare cleaning divisions to increase its share in these markets. There’s even talk of possibly expanding into the U.S.

In the short-term, United is focused on its 40th anniversary party, which is slated for June. Not only will it be a celebration of this major milestone; it will be a day of great pride for Milan who launched the business to provide for his family — then, now and always. All of his children are involved in the company, having worked their way up from the bottom into senior management roles. Along with Michael, Milan’s eldest son, Milan Jr., is director of corporate operations in Ontario. His daughter, Kathy, is director of national services, and Robert is the company’s corporate trainer. Even his eldest grandchild, Mike, is involved in the family business, working as a junior business analyst. It’s expected that others will follow-suit in due course, and eventually United will transition to third generation ownership.

“I used to think it would be nice if my children were able to continue what I started,” says Milan, recalling what happened to his father’s properties/businesses when he was a child. “I’m so happy that I was able to complete that cycle and United will live on — and get even bigger and better with time.”

Clare Tattersall is the editor of Facility Cleaning & Maintenance