A strong GTA rental market fuelled by favourable demographics lifted transaction velocity 8 per cent over the four quar­ters ending at mid-year 2019, according to a new report from Marcus & Millichap Real Estate Investment Services.

Citing widespread buyer activity and elevated interest in the areas of Etobicoke, York and Scarborough, the new report signals that only more good things are in the forecast for the back half of 2019.

“Due to the continued increase in home ownership values and the fact the market has priced out a lot of otherwise able purchasers, people have looked to renting as a necessity,” says Mark Paterson, Vice President and Regional Manager at Marcus & Millichap’s Toronto office. “This leads to increased demand in the rental market. ”

Robust investor interest led to a 9 per cent increase to the average price, rising past $277,000 per unit. Assets in the heart of Toronto changed hands at an average price just above $300,000 per unit. Greater affordability was found in Brampton, Scarborough and Oakville, with properties trading on a per unit basis in the low-$200,000 band.

As predicted by Marcus & Millichap, pent-up rental demand and strong rent growth will keep investors active this year, broadening their searches across the metro for remaining upside. A rollback of rent control regulations on new builds will boost demand for recently completed projects. 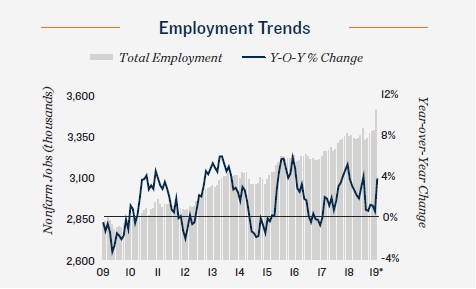 The Greater Toronto Area recorded vigorous employment gains in the first half of the year with the creation of 81,600 jobs. Many of the new jobs are high-paying tech positions as more companies in the industry grow their Canadian workforce. Employment grew at a rate of 3.4 per cent year over year in June, a substantial rise from the 2.9 per cent pace posted one year earlier.

A less restrictive immigration policy in contrast to the U.S., coupled with a mature tech ecosystem backed by government incentives and world-class universities, has Microsoft, Amazon, Pinterest and many other global firms searching for talent in the metro. A healthy economy and labour market have been a boon for household formation, a key driver of apartment de­mand, contributing to a strong rental market over the last few years.

“Immigrants make up nearly half of the population in Toronto,” notes Paterson. “With Toronto being the centre for tech jobs, a multi-cultural city with world class education that has attracted immigrants from around the world as a place for success and stability, as long as we continue to embrace immigration and multiculturalism, this will continue to show steady growth.”

Many prospective homebuyers remain unable to qualify for a mortgage in Toronto following the B-20 mortgage stress test in place since the start of last year. A single-family benchmark price of more than $875,000 in June compounds challenges to becoming a homeowner, pushing the monthly cost of ownership far beyond the cost of rental housing.

The average apart­ment rent in the metro was $1,370 per month at the end of 2018, a 4.7 per­cent increase from the prior year, still roughly $2,000 less than monthly payments on the single-family benchmark. A challenging housing market, particularly for first-time buyers, has led to rental demand far exceeding supply growth, holding the vacancy rate at a tight 1.1 percent last year.

Exceptional rental demand and a perpetually tight market motivated de­velopers to add 2,900 apartments to the GTA rental market over the past four quarters, up from the 2,464 purpose-built units completed during the prior year.

Greater focus was placed on Central Toronto where 1,650 units were added to the rental stock over the past year, followed by York where 430 apartments were completed. Rental inventory is anticipated to increase at the greatest rate in more than two decades with more than 3,500 apartments scheduled for delivery this year, a rise from last year’s completion total of 3,230 units.

One of the largest projects set to open this year is the 569-unit King’s Club in Liberty Village, pictured above.