Toronto’s developing West Don Lands community could see a pair of high-rise rental towers in the not-so-distant future, to be designed by Henning Larsen Architects. Submitted plans for the site known as 125R Mill Street, include: 198 affordable housing units proposed across 54,455 m² of residential space.

The development is being pursued by WDL 20 LP, a partnership between developers Dream Unlimited, Kilmer Group, and Tricon Capital Group.

The two rental properties, located east of Cherry Street and the streetcar loop, south of Mill Street, west of “Block 32” and north of the rail corridor, will offer substantial indoor and outdoor amenities, including a ‘Skylounge’ wrapping around the mechanical penthouse of the taller 45-storey west tower. At ground level, a six-storey podium will contain 23,872 m² of office space and 481 m² of at-grade retail uses.

The project marks the first major office development in the West Don Lands area and the third development to deliver affordable rental housing. Currently, a total of 682 affordable rental units are planned for the downtown neighbourhood, which has undergone enormous transformation throughout the past two decades. Today, it’s hard to believe the 88-acre lakefront site was once stagnant industrial lands before development commenced in the years leading up to the 2015 Pan Am Games. 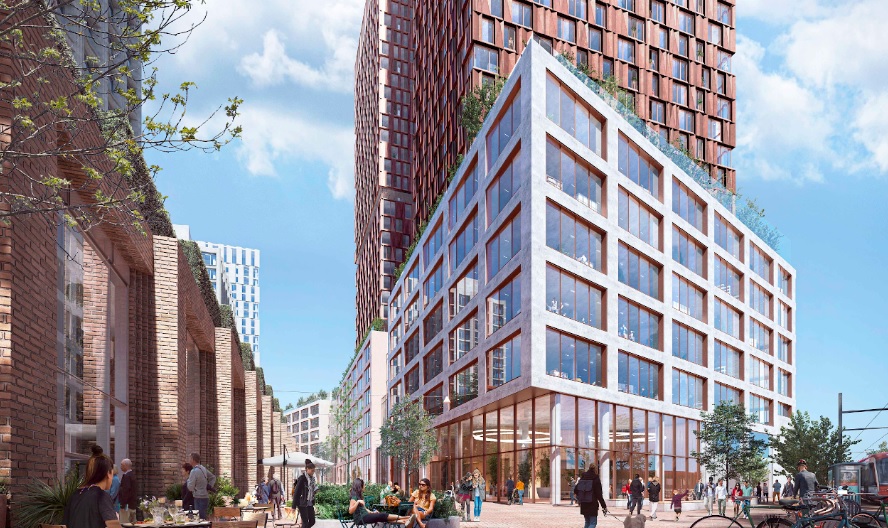