Fall is here, and university towns are about to get busy. This is great news for local business owners who’ve been fighting to stay afloat through the pandemic, but for residents wary of COVID-carrying newcomers, it’s nothing to rejoice about—and nor was it for the unlucky students who arrived to a barrage of “No Vacancy” signs.

“This is a real issue,” says David Hutniak, CEO of LandlordBC. “Finding suitable off-campus housing has been a serious struggle this year for post-secondary students, particularly in Victoria. In Vancouver, we’re not hearing about the same level of challenges as what we’re seeing in Victoria, but there is still a real need for more rental housing.”

Adding to the list of issues, University of Victoria’s long-held practice of guaranteeing on-campus housing to first-year students had to be put on hold due to uncertain provincial guidelines when the application process first opened. “Then there was the unexpected growth in UVIC’s student population, which now sits at roughly 20,000,” says Hutniak. “With close to 80 per cent of that number coming from outside Victoria—a city that’s had persistently low vacancy rates for many years prior to the pandemic—there’s simply not enough off-campus housing to fill the need.”

Hindered by nimbyism, municipal inertia, and what Hutniak refers to as “a city council that does not appreciate the significant costs and risks that go with building and operating rental housing,” rental developers and lenders have been hesitant to commit to future purpose-built rental developments. Additionally, the secondary market (i.e., basements suites and single-family homes) represents a huge proportion of the rental universe.

“We’ve seen shrinkage in that market as many homeowners with secondary suites or revenue properties have increasingly chosen to capitalize on the ridiculously hot sales market and sell,” he says. “Combine that with what appears to be an unfolding phenomenon that the new buyers of these homes are not interested in being landlords and there’s less of this rental than there used to be.”

Meanwhile, COVID posed additional challenges for landlords who were suddenly faced with an eviction moratorium, rent increase freeze, and constantly changing health and safety guidelines. When balanced against exponentially increasing costs, including taxes, insurance, utilities, and maintenance, it all conspired to push them out of the industry for good.

“When they looked at the risks and rewards associated with being a landlord, there were better places to invest their money without as many challenges,” Hutniak says. “This is a very concerning trend, especially in a small market like Victoria that’s so dependent upon the secondary market and not creating anywhere near enough new purpose-built rental.”

Rental housing shortages certainly aren’t confined to Western Canada, and some experts argue that more purpose-built student accommodations (PBSAs) are needed wherever colleges and universities exist. According to a recent market report by BONARD on behalf of Alignvest Student Housing, proportionately Canada has far less student-geared housing than other comparable nations, despite being one of the fastest-growing destinations for international students.

Exceeding both the U.K. and the U.S. in terms of annual growth, full-time enrollment in Canadian institutions has grown by 18  per cent since 2010/2011. In 2018/2019, the country hosted 2,155,425 post-secondary students in total, including 1,655,286 full-time, and all signs indicate it will continue to attract foreigners seeking a quality education.

“There is definitely room for more development,” says Trish MacPherson, Partner at Alignvest Student Housing. “Purpose-built student accommodations are highly desirable versus generic rental housing because they are tailored to students and typically located within a ten-minute walk of campus—or as we like to put it, the duration of three songs.” 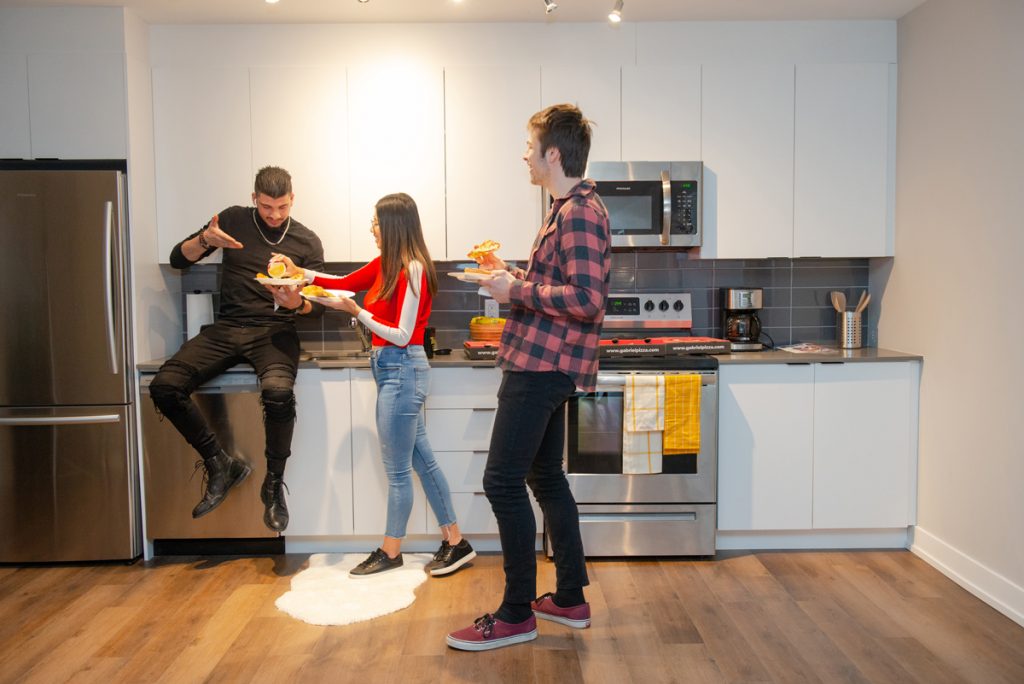 Unlike generic apartments, PBSA buildings offer residents the opportunity for privacy and community, with single rooms in a shared suite ranging from two to six bedrooms. The student-geared amenities include common kitchens, laundry rooms, games rooms, bicycle sheds, car parking, outdoor areas, party rooms and gyms, and residents can choose en-suite or shared bathrooms depending on their budget and preference.

“The pandemic situation strongly affected student socialization, which is an important part of the added value offered at PBSAs,” says MacPherson. “Second-year students coming out of residence, or for those who missed out on the first-year experience in 2020/2021, will benefit from being close to school in a new building surrounded by their peers where they can access built-in services and supports.”

Though off-campus PBSAs are traditionally more expensive than on-campus and other non-commercial student residences, MacPherson says their added value is reflected in continued high occupancy levels and the ever-increasing interest shown by investors. Currently, Alignvest’s properties are over 95 per cent occupied, and all tolled, account for about 4,700 beds. Despite COVID, the company recently expanded with three major acquisitions since March 2021: THEO in Ottawa (507 beds), Preston House in Waterloo (310 beds) and Bridgeport House, also in Waterloo (485 beds). 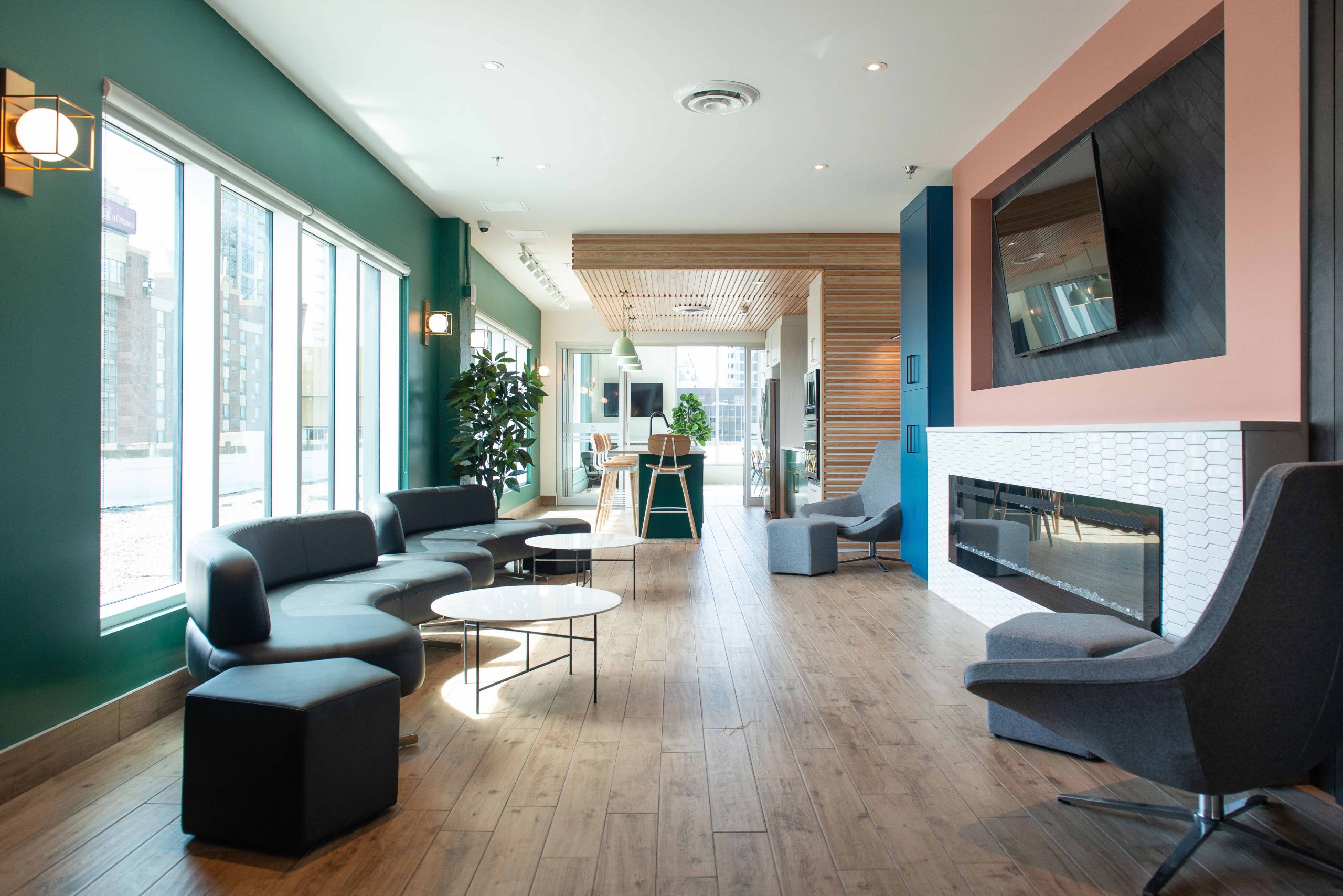 Common room at THEO in Ottawa

“This is a stable, resilient sector that has really proven itself,” concludes MacPherson. “COVID created a lot of challenges, but students still wanted to be near each other, safely partaking in normal activities. Our properties were able to facilitate that.”

Whether it’s to offset housing need in areas lacking in rental units, or to deliver that coveted student-life experience, the consensus according to the BONARD report, is that the Canadian off-campus PBSA market is poised for growth: “Despite the prevailing uncertainty around the education sector over the past year, it is thought that Canada’s position as an established education market and its low student housing provision rate will allow the sector to grow substantially once the pandemic is curtailed.”