As the average rent in Canada dropped to a record low of 9.1 per cent from a year ago, analysts share a hopeful outlook for Canada’s rental market in 2021, with rents forecast to increase 3 per cent by the second half of next year.

The latest report from Bullpen Research and Rentals.ca compares current data to that of 2019, when rents rose 9.4 per cent from the average recorded in December 2018. And as we’ve learned throughout this pandemic, it’s Canada’s largest urban centres that experienced those nasty double-digit declines.

“2020 has been the most unpredictable year of my nearly 20-year career as a housing analyst,” said Ben Myers, president of Bullpen Research & Consulting. “It is unlikely that even the most bearish market watcher would have predicted a 20 per cent annual decline in average rents in the former city of Toronto. For 2022, we believe the rental market will really take off, with double-digit rent growth in Vancouver and Toronto, and both markets will approach or surpass their fall 2019 market highs.”

What’s ahead for five Canadian cities in 2021

Forecasts are on the hopeful side, according to the December National Rent Report. Here is a closer look and what we can expect for key markets in the coming months.

After topping out at over $2,600 per month in late 2019, the average rent in Toronto (city boundaries prior to amalgamation) is expected to decline to $2,040 per month in December 2020, a decline of 21 per cent annually. The average rent is expected to continue to drop in the first quarter of 2021, but slowly start to recover in the second half of the year, finishing at $2,120 per month on average in December 2021, a 4 per cent annual increase.

Montreal is expected to be the top major market in Canada next year with rent growth of 6 per cent, rising from $1,665 per month forecast for December 2020 to $1,760 per month at the end of next year. There is no urban exodus in Montreal. Despite the strong rent growth in 2019, and the above-inflation increase in 2020, average rents are still relatively affordable compared to Toronto and Vancouver.

Vancouver is expected to finish the year with average rent down 9 per cent to $2,170 per month and continue to decline in early 2021. As the vaccine rolls out and consumer confidence returns, average rents will increase 3 per cent annually in 2021 to $2,240 per month.

The average rent in Calgary at the end of 2020 is expected to be about $1,350 per month, a 3 per cent annual decline. The forecast calls for rents to remain flat in 2021.

The average rent in Mississauga is expected to top Toronto at $2,045 per month in December 2020, an 11 per cent annual decline. But rents are forecast to improve to $2,090 in December 2021, a 2 per cent increase year over year.

What else to expect from Canada’s rental market

Rentals.ca and Bullpen Research tell us to anticipate an ongoing decline in rental rates that will persist into early 2021, as the continued lockdown limits in-person viewings, COVID cases increase, and the border remains mostly closed to new immigrants.

The decrease in demand will be met with an increase in supply. Based on data from CMHC, 2020 will likely set a 30-year high for new apartment completions (condo and rental) of about 100,000 suites.

A crackdown on short-term rentals in the city of Toronto, plus the potential for a vacant homes tax will increase supply further in Canada’s largest rental market.

With the COVID-19 vaccine on the way, it is likely that some tenants will try to time the bottom of the rental market and jump back in during the spring of 2021. Bullpen and Rentals.ca expect a sizable increase in demand in the fall of 2021, driving rents above December 2020 levels in most major markets.

Demand down, supply up 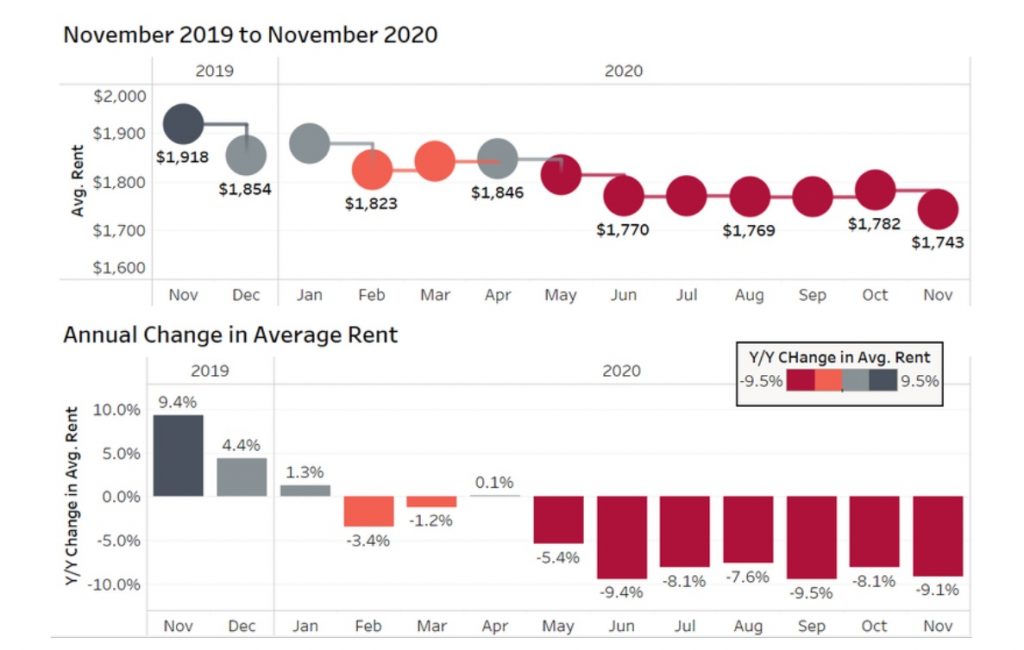 The downtown markets in Toronto and Vancouver have taken the biggest hits in 2020, due to the fact that they are more expensive, more affected by the lack of immigration and student populations, and more impacted by the loss of new graduates entering the rental market for job purposes.

All this amounts to demand being “way down” and supply being “way up”, with former short-term rentals also being offered in the long-term rental market and new unit completions on the rise.

In November 2019, the opposite was true with the average rent for one- and two-bedroom apartments increasing by 7 per cent in Toronto and 10 per cent in Vancouver. Although both cities continue to be the priciest for renters as we end off this year, both have also weathered steady declines since the pandemic began last March.