From retail to offices, healthcare to foodservice, there isn’t a sector of society that hasn’t been heavily impacted by the COVID-19 pandemic and the challenges and changes it has brought on. In short, while the foundations of cleaning and infection control remain the same, the practicalities of the job have seen fundamental shifts.

That is certainly no different in the complicated field of post-secondary education cleaning and maintenance. In fact, this is a uniquely difficult situation. Higher education campuses are often expansive and sprawling, and that’s without even taking into account institutions that are spread out over one or even multiple cities.

Post-secondary campuses consist of an almost incomprehensibly wide range of facilities for cleaning, maintenance, and janitorial staff to tackle. Classrooms and residences and break rooms are a given, but in many cases, there are also food and beverage outlets, on-site healthcare buildings, sporting and recreational amenities, retail stores, childcare, and much, much more.

That results in an environment like no other that has long presented a particularly stern test for staff to overcome.

“We’re a very, very diverse environment, particularly as a larger university, more so than most other facilities and areas,” says Christopher Bumbacco, Director of Building Services and Facilities Management at the University of Western Ontario (Western). “We have residences, office space, classrooms, recreational spaces, labs, event and bookable spaces for both internal and external events, medical facilities like our dental surgery, food and beverage. That’s undoubtedly the biggest challenge: there’s such a wide variety of things you’re maintaining in a wide variety of areas.”

Bumbacco notes that even the very structures themselves vary dramatically. Western, which has its primary campus in London, Ont., has some buildings that date back over 100 years, and others that opened last year. That results in different maintenance challenges: those buildings differ in surfaces, accessibility, electrical systems, and so on.

These large-scale campuses differ even from other educational facilities. An elementary or high school, while still a challenging site to maintain, tends to be more self-contained, with a smaller range of facilities. On post-secondary campuses, not only is everything more dispersed but there’s also the foot traffic factor. Many campuses are open to the public: people uninvolved with the college itself can walk through the site, stop to grab a coffee or use the recreational amenities. This adds yet another layer to an issue that is already deeply complex.

When COVID-19 hit, all those difficulties were exacerbated. One thing the onset of the pandemic did, though, was highlight how the extensive challenges of post-secondary education cleaning and maintenance gave good preparation for such a situation.

“We have always been structured to have an annually reviewed pandemic plan in place,” says Don Forster, Senior Manager of Sustainability and Operations at Seneca College, which has several campuses spread across the Greater Toronto Area and Peterborough, Ont. “We have seasonal cleaning procedures like a flu season plan wherein we increase our common-area cleaning. So, when the pandemic hit, the teams already knew we had a procedure in place. It wasn’t too big of a change for us on the cleaning and maintenance side; more so for students and faculty.”

In short, the work put in over the years behind the scenes by operational staff paid off in a pinch. “We’d already started focusing on cleaning for health at Western and that really helped us when COVID-19 hit,” notes Bumbacco.

That is not to say that certain, often significant, adjustments were needed. The widely-cited transition to “cleaning for health” may have been already underway, but it quickly became the new primary focus. Ensuring the health and safety of everyone on-site – students, faculty, other operational staff, the maintenance service teams themselves – was paramount.

While higher education facilities are unique in their requirements, there were naturally certain consistencies with other industries as the pandemic unfolded. Securing PPE was key. Social distancing was installed and maintained. Technology like electrostatic sprayers became key components of the job. Essentially, the bar were raised.

“At Seneca, we implemented a stringent return-to-campus procedure,” explains Forster. “When they walk into a classroom or a lab, students and faculty pick up a spray bottle and cleaning cloth and they’re responsible for cleaning and wiping that area they’re working in. We then launder the cloths, refill the bottles, and between classes our team goes in and does a complete high-touch clean including spraying with an electrostatic sprayer ready for the next group of students. In a way, that was more of a challenge for students and faculty than for our cleaning and maintenance teams, and they bought into it really quickly.”

Forster adds that Seneca saw some of the inevitable supply chain challenges, particularly early on in the first wave of the pandemic. But both he and Bumbacco note that their respective facilities’ longstanding relationships with suppliers and vendors came through for them when they needed them.

There was also a combination of proactive pre-planning and fortuitous timing. Part of Seneca’s pre-pandemic plan involved identifying optimal strategic locations for hand sanitizer dispensers, says Forster. Meanwhile, Bumbacco notes Western’s teams took deliveries of electrostatic sprayers at the turn of the year, planning to test them in some common areas. They ordered more before the demand surged. “We got a bit lucky there,” Bumbacco acknowledges. “We have a very large faculty of medicine and dentistry and these sprayers make cleaning and disinfecting so much easier and quicker. Spraying doesn’t mean we don’t clean; it enhances the pre-existing cleaning. Those things became invaluable during COVID-19 as we started doing more touchpoint cleaning.”

Many industries have had to deal with the situation changing repeatedly in the last 12 months, often at short notice. In general, though, at universities and colleges, on-campus traffic has decreased notably with more courses now being offered online, out of either preference or necessity. Fewer students are electing to remain on campus.

As a result, an early step was overhauling residences. “When COVID-19 was first starting, we wanted to provide distancing for everybody,” Bumbacco says. “With many students staying off campus, we were able to start dispersing the remaining students. Normally, Western’s residence population is close to 5,300. We were able to start using double rooms as single rooms, reducing washrooms to just two people, and so on. We had about 3700 students in residence back in September, and some have left since then as the situation in Ontario has changed several times. It really allowed us to re-densify things.”

At Seneca, the resident population is smaller, but the situation was similar. Seneca has a residence of 500 rooms on one of its smaller campuses, and 1,100 rooms on its main campus. “Right now, there’s only 500 or so in total on those campuses,” notes Forster.

A major effect of having fewer students and faculty on-site, and fewer courses being offered in traditional in-class fashion, is that the day-to-day flow of cleaning and maintenance operations has been revamped. These changes have been extensive. Many buildings have shut down completely, with no need to remain open, while others have extended their services.

While many studies could be easily transposed to virtual classes, others necessitate in-person studies, particularly more practical courses like healthcare and nursing. Forster explains that when it came to classrooms, labs, and other study areas at Seneca, that meant reallocating cleaning and maintenance staff and resources to focus on areas that had to remain open.

“We haven’t opened up anything we haven’t needed to,” he says. “For the buildings that are open, we have designated paths to and from classrooms, designated washrooms. Everything else is locked down to enable cleaning staff to follow behind individuals or groups and clean up and maintain those areas. We have tight restrictions, you can’t enter the building unless you are coming for class, you pre-screen and then go directly to and from your work areas.”

Forster adds that Seneca has invested in technology that sends real-time room occupancy data to custodial supervisors to aid the prioritization process. “If a threshold for a particular room is exceeding capacity for a given time, the supervisor can investigate and allocate extra resources to that area. Combine this technology with pre-scheduled cleaning routines and you have a valuable tool to help combat the spread of infection pathogens.”

At Western, too, it has been a case of prioritizing. For instance, Bumbacco notes some campus labs were actually working on COVID-19-related items. “There’s much more in-person teaching taking place in our classes related to medicine and dentistry and some of the clinical studies areas, so we needed to know who was here and where they were to prioritize our cleaning rotation. That’s true even now.”

That has the understandable knock-on effect of changing the hours of cleaning and maintenance work. “On the resident side,” Bumbacco notes, “our staff end later because we want to do that extra late-afternoon or early-evening common area clean before the night. On the academic side, with classes cancelled, we were able to clean classrooms and offices earlier. That will likely change because students are clamouring for spaces like libraries to be able to study on campus. If we start opening up a variety of other things on campus again then there’s going to be more demand for the cleaning. Universities have become almost 24-hour operations now; knowing what’s going on and being able to clean around that is so crucially important.” 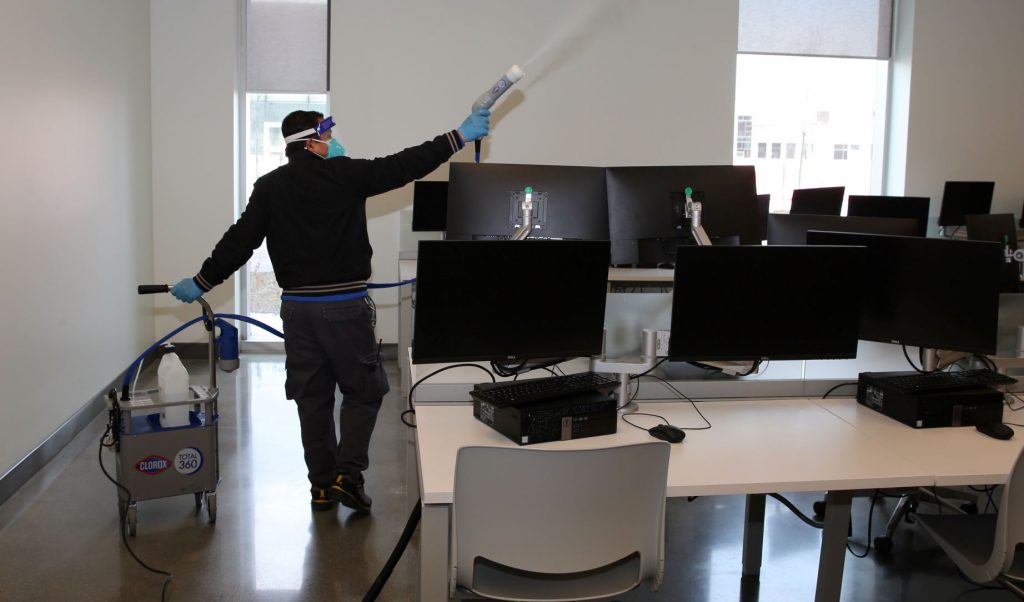 Boosting the visibility of cleaning has been important

With the push for enhanced cleaning standards, increasing communication and clarity has been vital. Before this pandemic, the important work done by custodial teams was often overlooked and taken for granted: that has changed drastically. Now, people not only want to know that measures are being taken, but they also want to see janitorial teams in action as visual confirmation of what is being done to keep them safe.

Forster notes Seneca has met that demand head-on. Videos showing the cleaning processes have become a core part of the orientation process. “When you’re coming on campus for classes, you must watch this video and check off saying you’ve understood,” he explains. “That’s been very helpful because we get feedback.”

Forster adds the increased visibility helps people understand just how thorough the processes are and goes a long way to keeping people informed and feeling comfortable and safe. “I don’t think anybody on campus goes more than 10 minutes without seeing custodial staff walking around spraying, wiping, doing something,” he says. “It provides comfort but it also keeps things upfront, holds us accountable. You have everybody’s eyes on you now. It’s that heightened awareness that we are one of the main pillars that keeps the campus going. This pandemic is validation of cleaning and maintenance and I think that will last long-term.”

“We wanted to make sure our staff and students understood their safety was paramount at Western,” he says. “But whenever extra events start coming back and outside groups come back on to campus, it’s going to be harder to keep up the same level of frequency we are implementing now. A lot of it will have to be about long-term education: everybody wants to sanitize but there are washrooms everywhere where you can practice the proper hand hygiene we’ve heard so much about in recent months. There are so many places to go on a campus – we can’t put sanitizers everywhere, so new standards will have to be maintained and built upon.”

It’s the maintaining of those new standards, the continuation and extension of the policies and procedures that have come out of this pandemic, that will be key to ensuring a cleaner campus future.