A number of key trends in the region combined to influence these favourable conditions for investors. As reported by Colliers:

• Historically low vacancy rates rose only marginally from 0.5% to 0.7% at year end, as estimated by CMHC;

• Rental rates across all unit types increased due to strong tenant demand and limited new supply;

• The majority of sales in 2017 were off-market transactions, with the prime motivator for many owners being the premium prices offered by investors;

• The region experienced an increase in popularity as a destination for the in-migration of new residents. 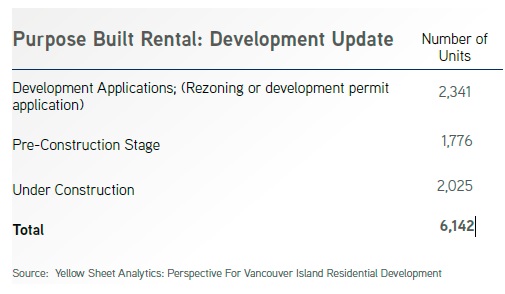 The most recent Yellow Sheet Analytics Report, which measures residential development for Vancouver Island, confirms that there are over 6,000 new units in various stages of planning and development coming into Victoria’s purpose-built rental market.

The published vacancy rate for rental units in the Greater Victoria Region, according to CMHC’s most recent survey, increased marginally from 0.5 per cent at year-end 2016 to 0.7 per cent at October 2017. With over 1,900 purpose-built rental units under construction in Greater Victoria, this will apply modest upward pressure to regional vacancy levels; however, there are a number of market dynamics that will offset increased vacancy levels, such as the following:

Victoria is currently experiencing an estimated 3.4 per cent unemployment rate, the lowest in Canada, which is attracting job seekers to the region, many of whom are typically renters. A large portion of these employment positions are being filled in the tech sector by Millennials who typically rent in the downtown area.

Demographics are playing a part in the demand for rental with more ’empty nesters’ choosing to relocate and rent accommodations to take advantage of the climate and lifestyle amenities offered by the South Island.

The rapidly increasing cost of housing means that many first-time buyers are challenged by affordability issues and are choosing to remain in rental accommodations as they save for increased down payment requirements.

The B-20 mortgage rule changes, which included increasing stress test criteria that took effect January 1st, 2018, will keep many uninsured buyers out of the market with the result that they will continue to occupy their existing rental units.

With a very tight rental market, turnover rates for rental units are at historical lows, leaving a very competitive environment for the remaining vacancies. The scarcity of the available supply allows landlords to charge a premium leaving budget renters more limited choices.

With the demand increasing for lower priced housing, combined with rental restrictions either in place or under consideration by the new NDP provincial government, and rising construction costs, some developers who had been contemplating construction of new rental buildings are now considering conversion to strata/condos as a more attractive economic development alternative.

For the complete report, including a list of all rental market transactions (over $1 million) to the end of 2017, click here: http://www.collierscanada.com/en/commercial-property-research/