By definition, amenities in the real estate sphere are elements of comfort and convenience—those tangible building features considered to benefit a property and thereby increase its overall value. Examples of common apartment amenities include swimming pools, bike storage, Wi-Fi and party rooms. But the list certainly doesn’t end there.

Opened by Tricon House in November 2018, The Selby is an example of a new purpose-built rental building designed with a specific audience in mind: young, urban professionals.

The stunning 50-storey building located in the heart of Toronto marks the introduction of Tricon House, a division of Tricon Capital Group. As a new player in the Toronto rental space, Tricon House is already on its way to setting a new standard for rental living, developing buildings that are “defined by design excellence, with suites curated for end-users, high quality amenities, elevated service levels, reimagined common spaces and resident programming that fosters community.”

Focusing primarily on the millennial market, The Selby offers residents what it describes as “a lifestyle that inspires comfort, connection and a sense of belonging through the first-of-its-kind millennial-centric services and experiences.”

The reason for this specificity? Simply, that the need was there and Tricon House saw an opportunity to fill it. Look no further than a recent Abacus Data survey of 18- to 37-year-olds, in which 40 per cent of the 2,000 participants said their generation is “mostly” or “much worse off” than their parents.

With these homeownership challenges in mind, Tricon House set out to create The Selby.

“Early residents are embracing not just the premium amenities at The Selby, but also the sense of community Tricon House intends to inspire,” said Gary Berman, President and CEO of Tricon Capital Group. “Tricon House provides phenomenal amenities you simply do not find on this scale anywhere else, and they’re designed with our residents in mind, making The Selby their home and not just the place they rent.” 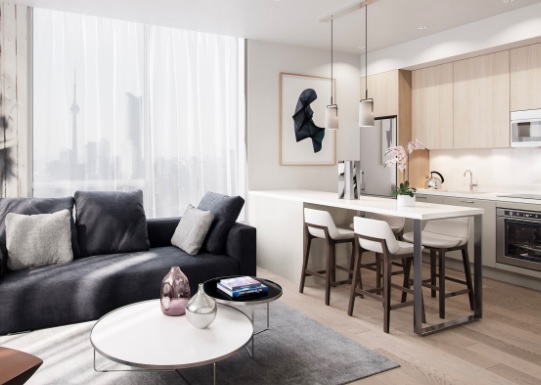 Aside from the 3,500 square-foot fitness facilities, wellness spa, outdoor common areas and pool, The Selby residents get to make use of 24-hour parcel lockers, smart technology, pet grooming facilities, an on-site café and more. By partnering with select brands to grant residents exclusive access to millennial-centric services and deals, Tricon House is going beyond its physical amenities by setting its sights on enhancing residents’ lives.

Some of The Selby’s current programs include:

For budding art collectors, Tricon House offers residents a gateway to discover and collect original art from award-winning artists featured on Eye Buy Art. The online platform allows residents to collect with confidence and have access to exclusive deals.

For those looking to have an immaculate suite, Tricon House has joined forces with Wayfair and Casper to offer residents discounts on mattresses, pillows and sheets, along with access to a selection of furnishings suited for The Selby.

Residents will always be in the loop with exclusive content and priority access to information on the best the city has to offer. Residents will receive Toronto Life’s hottest news about the top new restaurants, bars and galleries.

“Toronto residents are increasingly in need of rental housing options that are professionally managed, have easy commute times, and match their lifestyles,” said Berman. “Thoughtfully designed and appointed purpose-built rental apartments have been a mainstay housing option in U.S. cities for years. We are leveraging our experience in the U.S. and Canada to bring a new type of rental offering to Toronto. Our goal is to create communities that reflect the changing needs of a world-class city, to deliver buildings of exceptional quality, and to set the bar for a new type of city living.”

Meanwhile, Tricon House is working toward the eventual opening of several new rental properties in Toronto, including: The James in Summerhill/Rosedale, The Taylor in the city’s Fashion District and a residential development in the eastern part of downtown Toronto called West Don Lands. Once opened over the next few years, Tricon House will have over 3,000 much-needed rental units across Toronto filling that housing void.

Find out more by visiting: www.triconhouse.com