The work-from-home phenomenon and pandemic continue to shift rental demand patterns across Canada as tenants look for cheaper locations farther from their place of employment.

According to the latest data from Rentals.ca, rents in September were down 9.5 per cent overall with rents in downtown Toronto for a one-bedroom home dropping below the 2,000 mark for the seventh straight month.

“Toronto is seeing the biggest decline in rental and condo apartment rental rates on average among major municipalities in Canada; this is driven by the rapid decline in downtown condo rents, with many recently completed buildings seeing rates drop by 10 to 15 per cent annually,” said Ben Myers, president of Bullpen Research & Consulting. “Several of the condos experienced listings growth of 100 per cent to 200 per cent annually—a textbook example of what happens with less demand and more supply.”

The decline in average monthly rent at downtown properties can be attributed to the high number of condos for rent, and there is a significant influx of new supply hitting the market via completed projects.

Adding to the challenging conditions, the reduction in demand for short-term rentals from tourist and out-of-town contract workers has added vacancies—as has the fact that many students attending downtown colleges and universities have remained at home for virtually learning. 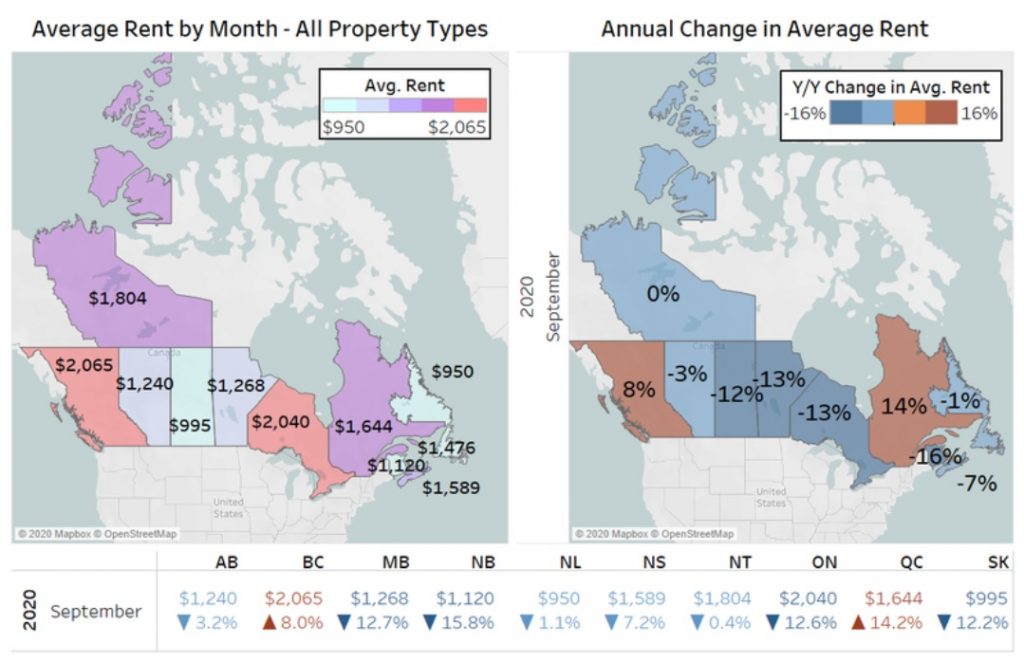 Toronto and North York, along with Winnipeg, saw drops in rental rates of about 14 per cent. Toronto’s -14.1 per cent annual rent drop is the worst in the country among major markets.

Montreal (17.2 per cent) and Kitchener (11.5 per cent) were the only two major municipalities in all of Canada to see rent appreciation for apartments and condo rentals. (Hamilton and London were removed from the chart because of a high number of listings from new purpose-built rental apartment projects pulling the average rent up).

In Vancouver, the average rent for single-family homes in the third quarter was $2,553 per month, lower than condo apartments, and down 29 per cent annually. Condo rents in Vancouver are down 17 per cent in Q3-2020 versus Q3-2019.

The most bizarre results are in Montreal, where average condo rents were down 17 per cent annually while the average rental apartment rents were up 20 per cent. According to Rentals.ca changes in the location, unit size, balcony size, level of finish, or unit views can vary significantly from quarter to quarter and impact the rental rates charged by landlords. Secondly, owners of rental apartments are more likely to offer rental incentives like a month or two free rent.

Other key takeaways from the October National Rent Report:

The complete rent report can be found at: Rentals.ca