Tom Rand sees the commercial real estate sector as a well placed ally in his envisioned strategy to counter climate disruption effectively, profitably and amiably. The clean-tech venture capitalist and author of the recently released book, The Case for Climate Capitalism, Economic Solutions for a Planet in Crisis, will host the third annual commercial real estate sustainability trailblazers (CREST) awards, Nov. 5., to recognize the achievements of collaborative landlord-tenant teams in pursuit of energy savings.

The online CREST awards ceremony will cap the third year of the race2reduce corporate challenge, sponsored by the Building Owners and Managers Association (BOMA) of Greater Toronto, which pits participating buildings in a friendly competition aimed at collectively reducing energy consumption by 10 per cent compared to 2017. CREST awards are bestowed for energy management leadership in five categories of building size from less than 50,000 to more than 500,000 square feet, along with two additional awards to recognize innovation and collaborative excellence across the entire field of participants.

This year that field boasts more than 1,730 buildings encompassing 248 million square feet of space in common areas and tenant premises — an increase from 650 buildings covering 95 million square feet in 2019. All enrollees in ENERGY STAR Portfolio Manager within BOMA Toronto’s jurisdiction are automatically signed up for the race2reduce, but participating owners/managers are further encouraged to engage tenants through communications and activities and/or to reach out to a third-party energy management service provider on the list of designated race2reduce ambassadors.

“The impact of the race continues to deepen across the electricity, natural gas, water and waste performance areas,” says Susan Allen, BOMA Toronto’s president and chief executive officer. “Over the three years, we have seen our member commitment continue to grow with even more determination to win one of these coveted awards. We are thrilled this year that Tom Rand, climate change expert, author, clean-technology venture capitalist and fellow Canadian will be joining us to host the 2020 CREST Awards.”

For his part, Rand commends race2reduce for energy-saving results — estimated at 19 gigawatt-hours or 19 million kilowatt-hours over the first two years of the three-year race — and for advancing the notion that energy-saving behaviour is simple, collegial and perhaps even fun. That’s in keeping with his new book’s thesis that there is much common ground to be staked and common good to be reaped in a non-combative, multi-sectoral approach to climate risk.

“It’s a perfect example of enabling and empowering people to play a role, directly and positively, in a problem that is normally too big to think about,” Rand submits. “Race2reduce normalizes a certain kind of activity, a certain kind of relationship between landlords and tenants. The whole trick is you have to give the average person, who may or may not care or know much about this stuff, a way to act. That’s what these kinds of programs do.”

Turning to that big, often inscrutable problem of climate change, Rand characterizes commercial real estate among the sectors that could be set for a happier transition to a low-carbon economy. In his book, he sketches out his own experience as co-developer of Toronto’s Planet Traveler Hostel, a renovation and retrofit of an early 20th century commercial building undertaken in 2008.

His targeted 75 per cent reduction in energy consumption was achieved with the installation of geothermal heating and cooling, solar thermal pre-heating for domestic hot water, heat recovery from shower drains, LED lighting and smart thermostats at a cost of approximately 5 per cent of the value of the building. Collectively, these energy efficiency upgrades came with about a three-year payback, but the development partners opted to fund them by borrowing against the value of the building.

“The loan payments are less than the energy savings. That’s the kicker: we were making more money from day one and are wealthier as hoteliers for making the decision to massively reduce energy,” Rand recounts in his book. “That’s better than free. It’s a no-brainer.”

It’s also a lesson, he acknowledges, in which many of the landlord players in race2reduce are already well versed. Sophisticated capital budgeters have long since gone form merely justifying to embracing the business case for reducing GHG emissions.

“It’s easy for the commercial real estate side, and increasingly the residential side, to play a very proactive role. They can do it without sacrificing their profits and I think that’s a wonderful thing to see,” Rand reflects. “The interesting thing now to see is the deployment of next-generation technologies across that portfolio. Whether it’s analytics or next-generation heat pumps or windows or building-integrated photovoltaics, there is a whole plethora of technologies that are moving forward.” 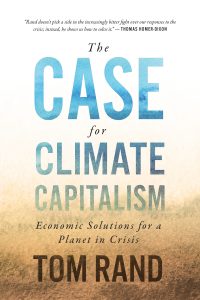 , particularly those he labels “energy incumbents” producing fossil fuels. They’re part of the block of interests his book tags as hostile to acknowledging or acting to address climate risk. Rand urges them to re-evaluate entrenched positions and get onboard with the possibilities as the price of renewable energy becomes ever more competitive. Failing that, he suggests they contemplate their exposure to economic loss and plan some contingencies.

The COVID-19 pandemic may actually have helped the latter exercise along, he contends, making it easier for senior executives of large oil and gas corporations to acknowledge that they will be writing down their assets. It has also created a scenario similar to the 2008 financial crisis where the public sector has been called on to shore up the economy.

He likewise chides those who view capitalism as a monolith, disregard its role in driving innovation that benefits society at large or look solely to utopian visions of a new cooperative order to solve an imminently looming climate threat. Competitive forces, he maintains, are neither inherently evil nor good. Rather, it’s the goal of the competition that matters.

“If the competition is set up to solve climate disruption, then those powerful forces would switch to work on the side of the angels,” his book reasons. “It was cutthroat global competition that brought the price of solar panels down 90 per cent over the past few years (a price cut now available to communes and corporations alike). Companies that provide low-cost clean solutions dominate; those that don’t, wither.”

For now, he’s waiting with interest for more details about the Canadian government’s recently announced efforts to spur that kind of green investment and job growth through a $2 billion allocation for large-scale building retrofits and matching $2 billion for clean energy.

“It’s great to see a focus on it. It’s great to see capital moving into that sector,” Rand affirms. “But it’s important that capital plays an accretive role such that more than what would normally happen under market conditions occurs.”