As the pandemic spreads across Canada its impact on the housing market is starting to become more clear. What was meant to be a record-breaking sales season in cities like Toronto and Vancouver has slowed down. Buyers and sellers are navigating uncertainty, while realtors have had to alter the way they operate showings.

“The real estate industry in general is going to go through a tremendously difficult time in 2020,” says Royal LePage CEO Phil Soper. The impact on everything from tenant revenue to brokerage sales to mortgage sales is going to plummet in a way that will make the 2008/2009 economic crisis look minor. The industry will weather the storm, but the year will be very difficult.”

While there are many variables still at play, housing prices are forecasted to remain steady through 2020, according to Royal Lepage’s newly released Housing Price Survey and Market Forecast. Any changes that do occur will depend upon the timespan of stay-at-home orders, the reports states.

During the first three months, when COVID-19 cases were beginning to make their ascent and social distancing rules weren’t as strict, the average national home price saw a 4.4 per cent increase compared to last year’s first quarter, sitting at $655,276.

If restrictions are lifted and the pandemic eases by the end of June, the average price is proposed to rise only one per cent year over year to $653,800. If the crisis continues on through the end of the summer, the price could fall three per cent to $627,900.

Sharp drops in interest rates haven’t been passed on to consumers by Canada’s big banks, so its effect on housing prices is negligible. People aren’t out shopping for homes, or even most non-essentials.

The reason that home prices are expected to remain relatively stable comes down to supply and demand, says Soper. There are fewer people looking to buy a home, but there are also fewer listings for sale as people prefer to stay at home. What would change prices is an imbalance between the two.

“Right now, as strange as it might seem, there is a sellers market in Canadian residential real estate because there is lots of competition between a far reduced group of buyers for a limited number of properties,” he notes. “That will continue through the evolution of this crisis.”

When things do ease back to normal, first-time buyers are predicted to return faster to the market than sellers. This group, says Soper, makes up 35 to 40 per cent of all transactions; sellers, on the other hand, have owned a home for a while and tend to be older. They also can’t manage their safety as easily as a buyer. Under new protocols, anyone selling their condo has to leave and can’t be on the property during a showing.

“That perceived additional risk that comes with age—all of these things are going to lend to a strange kind of housing shortage during the pandemic,” Soper forecasts, “When you have a housing shortage it’s kind of hard for prices to fall.”

He says the condo market will likely suffer more than the single-detached market for a couple of reasons. The short-term rental industry, currently restricted to those in need of housing during the emergency, will likely see a slow recovery, while the fate of employment and job security could also cause younger renters to move back home with families, which would take some housing demand away. Developers have also slowed plans for new builds that will bring less supply to cities already seeing housing shortages. 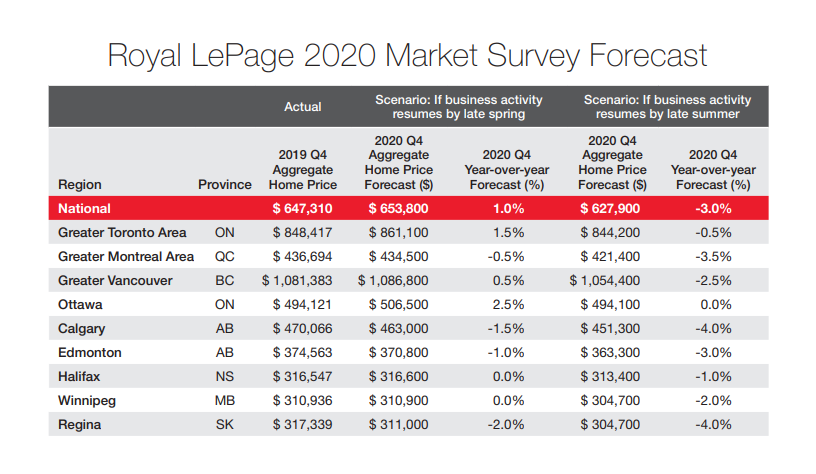 High demand and low inventory in Toronto, Montreal and Ottawa fueled rising home prices in Q1. What is the regional forecast?

In the Greater Toronto Area (GTA), demand outpaced supply in Q1. The average condo price in Toronto jumped 8.8 per cent year over year to $580,508 —higher than any other housing type. Overall home prices in the GTA saw a 7.5 rise to $866,211. If business activity resumes by the end of the second quarter, the GTA may see a year-over-year increase of 1.5 per cent, pushing homes to $861,100 by the end of 2020. If quarantine remains in place throughout summer, this would bring prices down 0.5 per cent to $844,200.

In Ottawa, condo prices jumped 8.1 per cent in Q1. The city is expected to see a gain of 2.5 per cent if the virus remains a threat by the end of Q2 and will stay flat if business resumes by summer’s end.

1 thought on “Housing prices to hold steady during pandemic”