The Nanaimo Airport expansion creates an uplifting and memorable experience for visitors and residents of Canada’s Vancouver Island. Located south of the growing port City of Nanaimo, the airport reflects the raw beauty of the landscape, its rich natural resources, and the promising future of the local community.

The island’s rich geology, mining and forestry industries and visual motifs from the golden age of aviation were sources of inspiration for the design OMB (Office of Mcfarlane Biggar Architects + Designers).

Completed in February 2020, the 17 500 sq.ft expansion is the first phase in OMB’s 55,000 sq.ft master plan for the terminal, comprising a generous new passenger lounge, dedicated security screening area and a new modular building design that can easily and seamlessly facilitate future expansion projects over the next 25 years.

Prior to the expansion, the undersized security and passenger areas were causing serious congestion problems, resulting in a poor user experience and also impacting revenue as potential users were electing to visit competing regional airports. 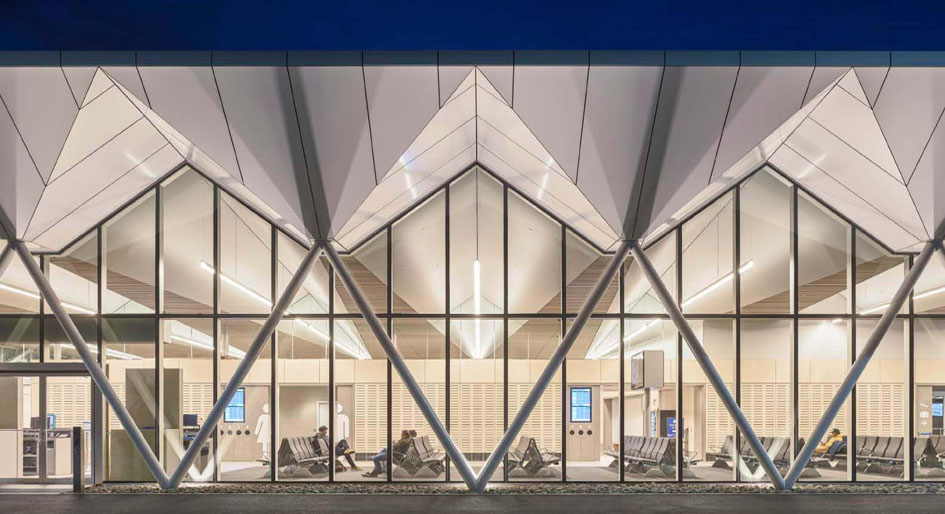 With the terminal anticipated to triple in size by 2035, the design team had the dual challenge of establishing an elegant new architectural and interior identity to guide the look and feel of future expansions while also addressing the airport’s immediate concerns.

And, to facilitate growth over time, the design team responded with a modularized architectural solution composed of repeating 20-foot wide bays that can be easily replicated to accommodate future growth –– without disrupting its day-to-day functioning.

The integrated architectural and interior solution, characterized by repeating modularized forms, is legible throughout the building. On the interior, the carved ceiling volume – a visual translation of underground coal mining seams – creates an ethereal above ground spatial experience. The crisp interior wood and drywall ceiling conceals the building services while creating a formal unifying element that contributes to the new terminal’s calm atmosphere.

The building modules each face the direction of travel, gradually opening toward the airside into expansive views of awaiting aircraft, acting as passive wayfinding and helping to alleviate passenger anxiety, especially in the security queue. These public circulation paths are reinforced by a maple lined wall running the full length of the new departure lounge. The wall provides privacy for the passenger screening area while also concealing critical building services such as air distribution, garbage and recycling receptacles, and public washrooms. 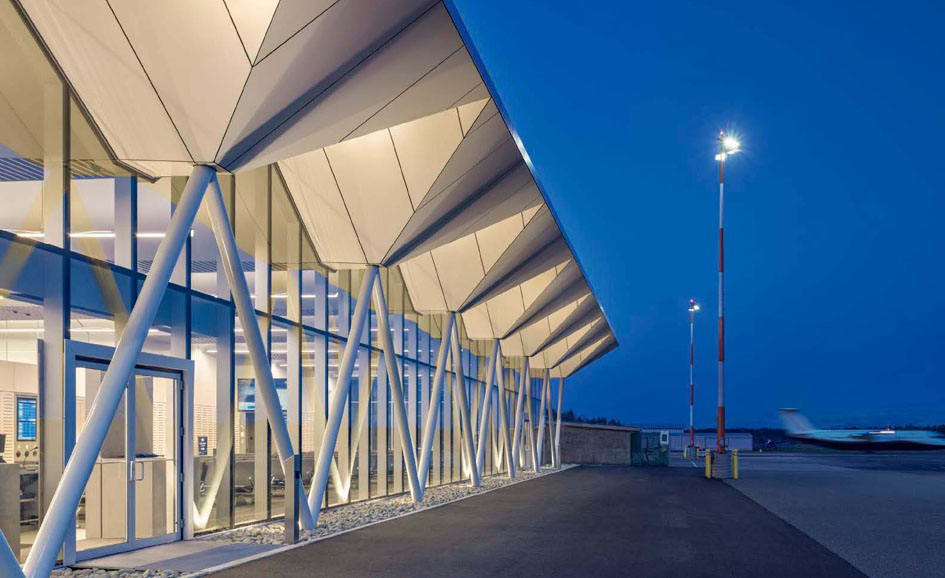 Locally sourced materials are used throughout both to reflect Vancouver Island’s rich natural resources and to ensure that all the materials and finishes would be available throughout the multi-phase masterplan.

The monolithic departure gate counters are made of slate from a local quarry. The slatted wood ceiling is made of pickled Western Hemlock, a locally harvested tree species chosen for its lightness, while Solid Douglas fir stools were sourced from neighboring forests and manufactured by local artisans. The millwork and thresholds are lined with solid Corian surfaces, inset with white wayfinding to minimize visual clutter. Encouraging daylight to enter and play off of these rhythmic forms gives the terminal an ephemeral appearance that melts into the landscape.