“There is the beginning of awareness among our members that accessibility is good for business, and that’s not unique to our industry,” Benjamin Shinewald, president and the chief executive officer of the Building Owners and Managers Association (BOMA) of Canada, told the gathering in Toronto. “We are at early stages, which is an exciting moment, but a moment that shows how much work we still have to do.”

“We’ve been into sustainability for 15 years, but we have not been talking about this until quite recently,” concurred Laura Malley, director of property management for Triovest Realty in British Columbia and property manager of Marine Gateway, a Vancouver mixed-use complex and co-winner of the BOMA Canada Rick Hansen Accessibility Challenge Award, which was added to slate of BOMA Canada National Awards for the first time in 2019. “We do care, but we have not had the resources to figure out what we should be doing.”

That’s changing with the 2017 arrival of RHFAC and BOMA Canada’s affiliation with the program, providing guidance on inclusive design and measures to enhance how people of all abilities use, move through and interpret what’s occurring within built space. The new Accessibility Challenge Award recognizes the BOMA member building achieving the highest RHFAC score, and building owners/managers are encouraged to consult the recently released Accessibility Guide, available as a free download.

As of April 2019, the BOMA BEST assessment and benchmarking tool for existing buildings also awards innovation points aligned with RHFAC criteria — a step Shinewald foresees will help push the issue into more owners/managers’ consciousness and onto budgetary priority lists. “I am very confident that is going to work because people in my industry are super competitive,” he submitted.

Yet, he cautions that constraints and challenges inherent to commercial real estate, and particularly in existing buildings, could temper positive intentions. Structurally, older buildings can be literally fraught with obstacles, while, conceptually, commercial space is something of a collection of fiefdoms. Owners/managers have clear authority over common spaces, but little flexibility to impose non-contractual conditions in tenants’ premises.

“It is extremely complicated in our industry, where people rent space and just want to be left alone, to instigate this conversation,” Shinewald observed.

Looking to sustainability comparisons, Malley noted that tenants’ openness to green lease conditions has been nurtured and achieved gradually over several years. However, accessibility efforts could benefit from experiences of implementing  sustainability measures that have proven to be cost-effective, contribute to productivity and boost buildings’ profile in the marketplace.

“I do think there is going to be market pressure and market pressure will wake the industry even more,” Shinewald predicted. “As with sustainability, you can do small things for free that aren’t capital plan items. To call it ‘retrofit’ is almost too grand of a word because that sounds complicated and expensive.”

Stepping into the newly completed Marine Gateway in early 2016, Malley took on a wide range and full agenda of tasks in overseeing 255,000 square feet of office space, 245,000 square feet of retail and 466 units of housing in two residential towers — all connected to a hub of Vancouver’s public transit system that channels approximately 2.5 million commuters through the property every year. 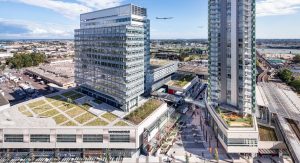 “It’s a really unique and beautiful complex in Vancouver,” she asserted. “And it’s a very busy development.”

Early promotion of RHFAC, related to the B.C. government’s commitment to fund up to 1,100 accessibility assessments in commercial, institutional and multi-residential buildings from the fall of 2017 to March 2019, aligned with her professional concerns and reignited youthful memories of Rick Hansen’s 1980s-era Man in Motion world tour.

“I’m a Gen X-er,” she said. “I signed up so fast, I actually spelled our company’s name wrong.”

Findings from that accessibility audit proved particularly insightful to explain and address why a residential tenant had fallen while in the outdoor plaza. The RHFAC auditor pointed to the changing surface slope, which pedestrians with visual impairments would find difficult to detect. Since then, money has been budgeted to install tactile tiles that provide another kind of cue.

Visual fire alarms to notify people with hearing impairments — another absent feature the RHFAC auditor identified — have also been installed. Other improvements undertaken or added to the capital project list include: reshaping handrails with rounded rather than blunt endings; ensuring that common area seating has armrests to support balance as users stand up or sit down; eliminating sharp edges in bicycle racks; and installing mirrors in elevators so users can better see potential hazards inside when the doors open.

“Now that these issues have been brought to my attention, I see things everywhere,” Malley reported.

Since taking on her relatively new role as Triovest’s B.C. director with associated responsibility for a 5-million-square-foot portfolio, she also plans to attain RHFAC designated professional standing so she can apply the knowledge in decision-making and guide staff and contracted service providers. She counts Ryan Bragg, principal of Perkins + Will Architects, among the enthusiasts.

Prompts and aids for accessibility momentum

Looking at how and where the pace of progress could pick up, Shinewald and Malley outlined a few mutually reinforcing possibilities, including government intervention, technology and peer pressure. Institutional investors and their associated real estate ventures have typically been leaders in environmental, social and governance (ESG) policies and practices, and Shinewald foresees they may introduce new job functions for accessibility, similar to forging the sustainability manager job category 10 to 15 years ago.

“I am not aware of anyone in the industry who has a fulltime position managing accessibility currently,” he said. “Sooner or later, this will be a leadership moment.”

As always, governments hold carrot-and-stick powers. They could offer incentives, impose regulations or enact a combination of the two. Especially in office space, governments also figure in market demand.

“They are big customers of ours,” Shinewald said. “So they can just be demanding customers.”