For many of us, our first lessons come not from school books but from informal encounters. Sometimes our school books echo these encounters, other times they anticipate them. A history I grew up with was rooted in a curriculum partial to daring European explorers pushing their way into a vast, underexploited landscape, with little to say about the lives of those living here prior to “contact.” The focus of this history was “our natural resources”—forestry, mining, and fishing.

“Here,” said the tinsmith who once a month parked his camper at the end of our block and waited for our mothers to bring him our dulled cutlery. “Take this hook, run a line through its eye, and voilà—you’re halfway in business.”

“You can’t just put a worm on its end and throw it in the water, right?”

We nodded, wishing we knew why.

The tinsmith got up from his stool, walked over to a neighbouring fir, and snapped off a branch. “Need something to keep the hook away from the shore,” he said, tying the line to the end of the branch and dropping the hook end in a puddle, where the line curled up, the hook nestled within it.

This time it was the tinsmith who nodded. He kicked at the earth and dislodged a jagged piece of rock and tied it above the hook. But instead of tossing the rock in the puddle, he held it high and, as if we were not already hypnotized by his demonstration, swung it back and forth before us. “Hook and line notwithstanding, what you have here is what this province was built on: wood from our forests, minerals from our mines, and . . .” he said, with an eyebrow raised.

“The fish you catch with that hook?” another of us offered, cautiously.

Lessons like this are what I mean by an informal encounter. And since my time growing up, school curricula and industry have come to have a more progressive, socially-conscious relationship with our vast forests and landscape, one of mutuality and sustainability.

My own relationship with the land has me spending more and more time on its roads. Rather than take the quickest route from A to B, I have learned to slow down, savour the journey, count its trees and rocks among my friends. A recent trip had me travelling south from Pemberton via the Lower Mainland to Penticton—all in a single day.

Because of my earlier than expected start, I decided to stop at the Cheakamus Centre in Brackendale, a half hour’s drive south of Whistler. I was familiar with the site when it was the North Vancouver Outdoor School (est. 1969), but I had yet to visit it since the construction of the BlueShore Environmental Learning Centre in 2012. Although the Centre’s program continues to emphasize learning with and through the land (“Nature is in session”), its new building designed by McFarland Marceau Architects Ltd. is for all ages—a modern “green” structure situated among living cedars and built in part with reclaimed beams. Here, wood is not simply a convenient material used to keep the heat in and the rain out, it lives on through its thoughtful placement in relation to the forests from which its boards and beams were born.

The lessons of the Cheakamus Creek building remained with me as I drove past the site of the new Vancouver Art Gallery (VAG) at downtown Vancouver’s Larwill Park. Back in 2015, the VAG unveiled its Herzog & de Meuron–designed, all-wood building to a buzzing public, many of whom were astonished that a modern building could be made of anything other than concrete, glass, and steel. Never have I heard such a debate over a material, even more so than the structure’s ambitious Jenga-like design. Rather than continue along Georgia Street to Highway 1, I decided to visit another ambitious building—the VanDusen Botanical Garden Visitor Centre at Oak Street and 37th Avenue. 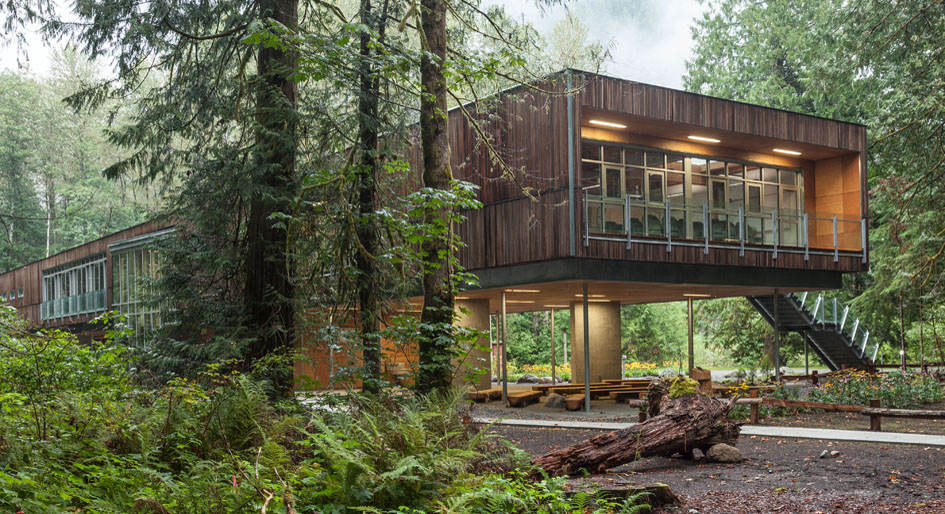 Unlike the Cheakamus Centre, which is in a forest, the VanDusen’s visitor centre (the second visitor centre in the VanDusen’s almost fifty-year history) is in a cultivated garden space. Moreover, whereas the site of the Cheakamus Centre was originally designed for school-age children, the VanDusen’s earlier centre, with its compact Shhh, no running! layout, had become associated with seniors. This new environmentally-friendly visitor centre envisioned by Perkins and Will, with its rhythmic, undulating wood design and fluid interior spaces, seems aware, if not encouraging, of the energies of children. To see a pair of nine-year-olds swan past in blanket capes and chamomile crowns is to ask, who says children have no patience for gardens? And indeed, who says they can’t be inspired by modern architecture? One of them likened the wood rafters of the VanDusen’s exterior canopy to the gills of a mushroom.

The quickest route to Penticton from the Lower Mainland is Highway 5 through the Coquihalla Connector, but on this trip I chose river valleys over mountain passes and took Highway 3 instead. A highlight on this route is that Las Vegas of fruit stands known as Keremeos, which, with its hand-painted wooden signs, was in full bloom. Another is the recent west wing addition to the Penticton Lakeside Resort designed by HDR | CEI Architecture Associates, Inc.—a six-storey wood-primary hotel whose mass-timber construction includes an atrium that evokes the 1930s forest-as cathedral paintings of Emily Carr, but also Barnett Newman’s equally inspirational Voice of Fire (1967), an eighteen-foot-high “elemental” painting commissioned to echo Buckminster Fuller’s geodesic dome pavilion at Expo 67, and now on permanent display at the National Gallery of Canada.

How fortunate we are to have moments like this in our province, where nature, art, architecture, and industry come together and, without planes, trains, or automobiles, truly transport us, remind us where and what we are from—in the silence of a hotel lobby. It is encounters like this that we need more of.