By definition, visualization technology is a technique for creating images, diagrams, or animations to communicate a message. But in essence, it’s so much more. Since the dawn of humanity, visual imagery has been used as an effective means for sharing complex thoughts and ideas—hence the saying, “A picture is worth a thousand words.”

From cave paintings to hieroglyphs, Greek geometry to painted renderings, year-by-year our imaging capabilities are advancing at a startling rate. Today, it’s hard to imagine a time when hand-drawn architectural sketches were the industry’s utmost tool.

“Visualization technology has given designers the ability to produce higher quality renderings far more quickly,” says Chris Febbraro, BIM Leader at RJC Engineers. “When changes occur to a project, they can be communicated faster and with more accuracy, making it more representative of an ever-evolving design. With BIM (Building Information Modelling), we are seeing that the model is alive and changing from week to week. This fluidity of design just wasn’t possible when we were putting drawings together by hand.”

While visualization technology plays a huge role in early-stage communication, according to Febbraro, it goes well beyond that—even helping to shape the outcome of the physical structure itself. “Just look at the development of the Toronto skyline today versus 40 years ago when buildings were more orthogonal,” he says. “Today we have complex organic façade systems stretching 90 storeys into the sky. This is a direct result of being able to design in a 3D workflow.”

Seeing the future in 3D detail minimizes the risk for stakeholders while potentially opening up some unexpected doors. “Renderings put the client at ease,” he says. “Interactive visualization takes it one step further and puts them inside the building.”

Although 2D drawings for construction and legal purposes are still required by the industry, visualization technology makes design collaboration much more immersive. Moving to a 3D workflow improves the process of finding and documenting design issues and clashes, thereby improving overall efficiencies. And beyond that, they’re highly satisfying.

“I sometimes think that because we’re working with 3D models every day, we’re a little bit jaded on how cool this technology is,” says Febbraro. “When an owner sees a photo-real rendering or animation, or jumps into an interactive visualization, they get incredibly excited by it. That being said, there’s also money and time saved if an owner sees something they don’t like. It is far more costly when issues are caught after the building is finished.” 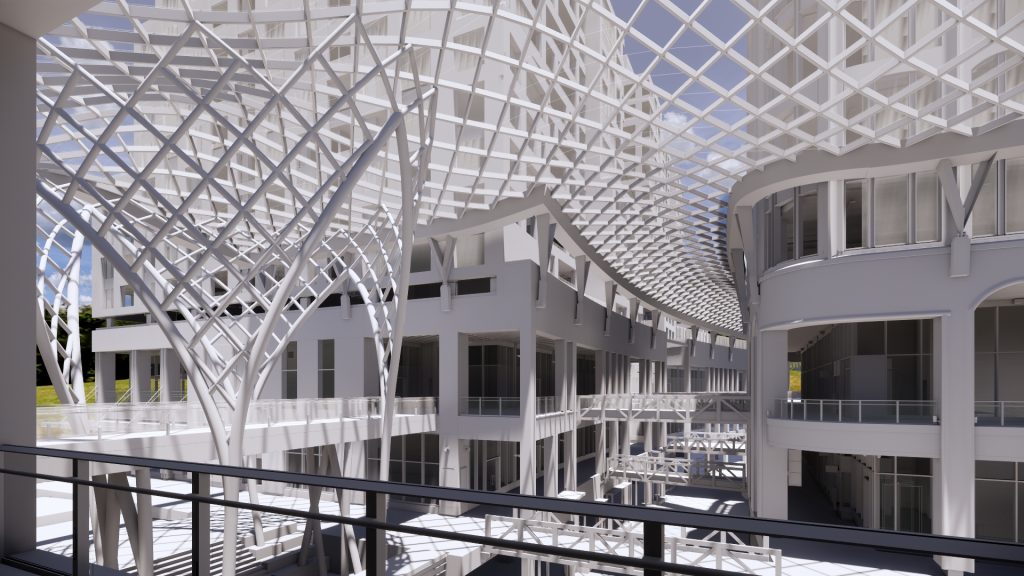 Given that no two projects or schedules are alike, Febbraro says the accuracy of renderings essentially comes down to individual project requirements and software choices. In other words, they can be highly accurate or they can be more rudimentary.

“It’s driven primarily by how quickly the renderings need to be produced and how much an owner is willing to spend,” he says. “As much as I would love to produce renderings to the highest quality and accuracy every time, it’s usually not practical and follows the law of diminishing returns.”

That said, Febbraro points out that visualization integration with Revit (BIM software) is making the point of dimensional accuracy moot. “As we’re putting together our construction documentation, we can take a kind of snap-shot of the work we’ve done so far,” he says. “Theoretically after we finish the Revit model, we should be able see the building dimensionally accurate to how it will be built.”

Where will the technology take us next?

As for what the future holds, Febbraro predicts Virtual Reality is the next evolution of visualization technology. “VR is developing and becoming more in-line with the value it’s providing,” he says. “The quality of this technology will continue to improve, with better hardware, higher resolution displays and further miniaturization of the devices. On the software side, we’ll see better integration with Revit and other BIM software packages.”

And we shouldn’t ignore other related technologies, like AR (Augmented Reality). “I see AR as just as valuable, albeit less immersive than VR,” he says. “The barriers to using the technology will diminish as it becomes easier to use.”

Meanwhile, clients looking for rendering and interactive visualization services today won’t be disappointed. “ It’s not a very common thing to see a structural engineering company embrace visualization like RJC has. We hear time and time again from both the architects and owners we work with, that the level of service we offer is beyond what they’re used to seeing from other firms,” he says. “Overall, it’s well worth it.”

To find out how RJC’s visualization technology can benefit you, or to contact Chris Febbraro directly, visit: www.RJC.ca.