B.C. forest products are a predominant structural and finishing material for a wide range of transit infrastructure throughout the province.

Architect Peter Busby oversaw the Brentwood Town Centre Station in Burnaby, which he points to as an example of wood’s durability. The iconic SkyTrain station was the first in a series of innovative transit station designs.

The station on Metro Vancouver’s Millennium Line has stood the test of time.

“It’s now 17 years old, and the glulam and nail-laminated wood ceiling is in perfect condition,” he said. “The steel has been repainted three times. So when somebody says wood won’t last, we take them out there and say, ‘Well, it lasts a lot longer than painted steel.’”

The station’s sleek, canoe-like design has two curved nail-laminated timber canopies, supported by glue-laminated (glulam) timber ribs. The SkyTrain station is a forerunner to other stations Perkins and Will designed that incorporate wood, including Canada Line stations Richmond Brighouse, Aberdeen, and Landsdowne.

United by similarities in structure, glazing, and roof elements, these three stations contain prefabricated modular roof panels constructed from Douglas-fir. The roof-deck is made up of dimension lumber solidly packed together on edge, thin enough to achieve its curvilinear form. Each required only about a week and a half to install.

In Kelowna, The Queensway Transit Exchange is a gateway to the Okanagan city’s downtown core. Envisioned by VIA Architecture, the station has an impressive 60-metre-long curvilinear roof span with an arc inspired by the nearby rolling hills and waves on Okanagan Lake. The span is achieved through the use of two engineered glulam beams supporting nine-metre-wide decking panels. 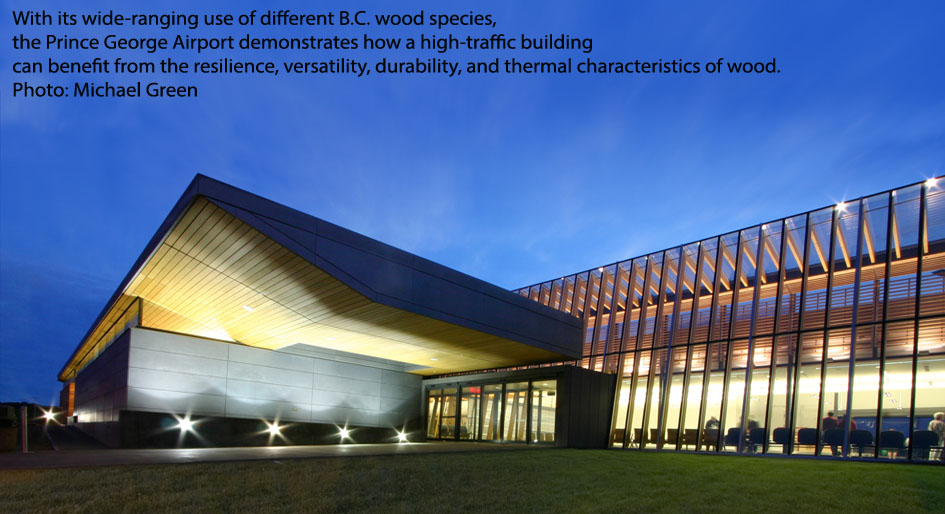 A variety of wood species were used by Mcfarlane Green Biggar Architecture + Design in the expansion of the Prince George Airport. Located in a city prone to cold winters, the structure needed the resilience, versatility, durability and thermal characteristics wood provides. On the outside, the structure uses Douglas-fir glulam columns and ceiling planks. Inside, maple is used to create seating in the departure lounge. The use of exposed wood offers a contemporary and tranquil aesthetic for travellers.

The spectacular Kuskanax Creek Footbridge in the Village of Nakusp, developed by Omega Engineering, carries foot traffic and those on horseback 36 metres across the scenic West Kootenay tributary. The timber components were manufactured off-site to cause less disturbance to the natural surroundings. The steel understructure provides load-bearing support to a solid Douglas-fir wood deck, posts, railings and an overhanging roof. Much of the materials, labour and construction expertise were sourced locally.

These projects and others are featured in a newly released book, Naturally Wood, which showcases British Columbia’s cutting‐edge wood architecture and design. The beautifully illustrated, 160-page publication contains more than 65 innovative wood buildings and projects, including how wood is being used in transportation.