There’s no missing the Fairmont Royal York when flying over Toronto, pulling into Union Station on one of the main train lines or travelling into the downtown core via the Gardiner Expressway. At 28 storeys, the recognizable landmark may no longer be the tallest tower in the city (or the British Commonwealth, for that matter) – a title it lay claim to in 1929, when it opened to great fanfare – but its presence is still pronounced amidst the massive office buildings and condos that now surround the chateau-style hotel. Popularity has rarely waned since the first guests walked through the doors nearly 90 years ago into an opulent interior fit for not just a queen but ‘the’ queen; Canada’s monarch has called the historic hotel ‘home’ while visiting Toronto, as has several members of the royal family.

While many of the hotel’s original heritage features remain, including the famed ornate crystal chandeliers found throughout and the hand-carved wood lobby ceiling, it has gone through a number of renovations throughout the years, even expanding to welcome a new type of guest – rooftop honeybees. In 2014, Fairmont unveiled its first bee hotel, providing the endangered species with a safe place to rest their wings. Most recently, the famed building underwent an extensive renovation that included the complete redesign of nearly 900 guestrooms across 11 floors as well as updates to its pool and health spa – a task that was no easy feat given the hotel was fully operational throughout the five-year construction process.

“We are fortunate enough at the Fairmont Royal York to run high occupancy levels but with these high business levels it was crucial to keep in mind the impact renovations would have on our guests,” says the hotel’s director of housekeeping, Nicole (Nikki) Stewart. “A main goal was to create a clear separation from our guests and the work being completed, whenever possible. In regards to noise, we had specific hours that construction could take place during the day and we ensured that construction hours were communicated to our guests before arriving at their rooms.”

Fairmont has since embarked on Phase 2 of its multimillion dollar hotel transformation, which includes the lobby, dining venues, meeting spaces as well as the complete redevelopment of more than 100 of the hotel’s most prestigious guestrooms.

“It’s a very exciting time seeing the Fairmont Royal York being transformed,” says Stewart, who joined the hotel in June 2016, upon relocating from Scottsdale, Ariz., where she served as housekeeping manager at the Fairmont Scottsdale Princess.

Stewart’s storied career with Fairmont dates back more than a decade. She began working for the luxury chain of hotels in 2005, as a room attendant at the Fairmont Jasper Park Lodge in Alberta, where she held progressive positions including housekeeping supervisor, housekeeping manager and laundry/valet manager. After five years at the mountain resort, Stewart briefly parted ways with Fairmont to serve at sea, specifically on a luxury cruise line as the ship’s senior assistant chief executive housekeeper. Eight months later, her feet returned to dry land and Fairmont where they have remained firmly planted ever since. From 2011 to 2015, Stewart called the Fairmont Chateau Whistler in B.C. home before heading south of the border to the Grand Canyon state, only to travel back to the true north a little more than a year later.

“My role here is to support all the hardworking staff, my colleagues and leaders to deliver engaging, thoughtful service and to ensure every one of our guests is well taken care of,” says Stewart, who originally joined the Fairmont Royal York as senior housekeeping manager, laundry, and then quickly moved into the positions of director of laundry operations, assistant director of housekeeping and finally director of housekeeping. 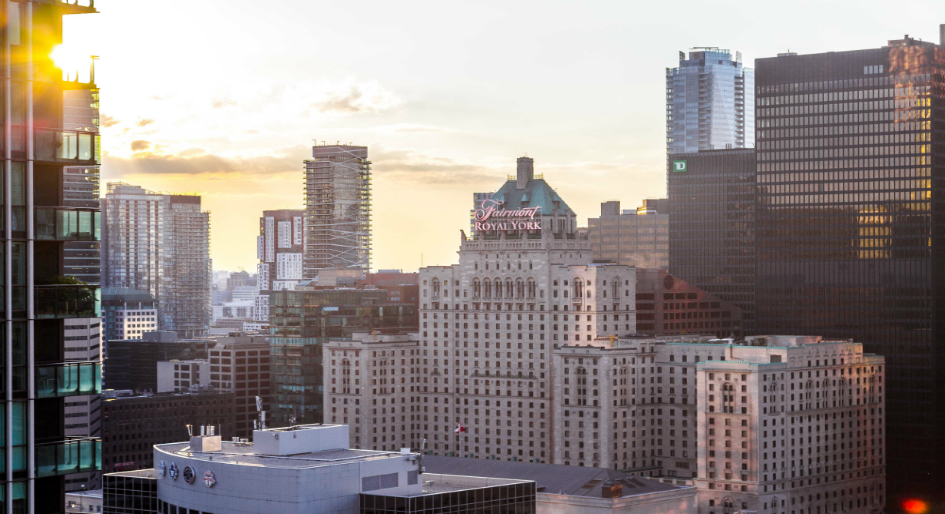 In her current post, Stewart oversees a large team of more than 350 people – 297 housekeepers and 57 launderers to be exact. All cleaning and maintenance-related tasks are performed in-house, with the exception of the hotel’s overnight cleaning, dry cleaning services and maintenance of the iconic rooftop sign, which involves regular removal of debris that accumulates in the letters and yearly inspection of wiring components to ensure proper operation.

“Having all trades, from an engineering perspective, represented in-house is unique to our property and extremely advantageous in terms of timeliness and accuracy because this is an old building filled with a lot of nooks and crannies,” she explains.

On-premises laundry operations have also proven beneficial, says Stewart, who is thankful the original owner, Canadian Pacific Railway, had the foresight to include it in the building design.

“Having laundry on-site allows us to control the turnaround time and care of our linens,” she says, noting the facility processes an average of 1,000 pounds of laundry per day.

In an effort to become more efficient in its operations – laundry consumes copious amounts of H2O – the Fairmont Royal York installed a commercial water softener in 2005, which has reduced water use in the laundry to one wash and one rinse per cycle, saving 476,000 litres of water per day (enough water to supply 500 homes). To put this in perspective, the hotel was originally using 676,000 litres of water daily to double wash and triple rinse the laundry.

The addition of the water softener is but one of many sustainable initiatives Fairmont has undertaken to reduce the hotel’s environmental footprint. Others include the installation of LED lights in each of the 1,373 guestrooms, implementation of an optional towel and linen reuse program, use of Green Seal or Safer Choice-certified cleaning products and donation of discarded guestroom soap and plastic shampoo/conditioner amenity bottles to Clean the World, which then recycles and distributes them to homeless shelters across the country.

“We are one of the top donors in Canada,” Stewart proudly notes.

She is also pleased with the pace of cleaning at the hotel. While it varies depending on the size of the space, it takes 30 minutes on average to fully clean a guestroom. She credits this to the dedicated, tenured employees who pride themselves on providing an exemplary guest experience, the recent adoption of a hotel service optimization system, or HotSOS, and Fairmont’s extensive training programs.

HotSOS is a cloud-based solution that automates and prioritizes housekeeping operations, resulting in reduced check-in wait times. Housekeeping staff use mobile devices to receive tasks, submit maintenance issues and send guestrooms’ availability to the front desk, all in real-time.

“It has already proven, in the short nine months that we’ve had it, to be a room expeditor, which has improved guest satisfaction,” says Stewart. “We can assign a housekeeper to a room for cleaning if a guest is waiting, instead of tackling one that doesn’t need service. It makes the most effective use of their time.”

However, without proper training, or a lack of, the quality of cleanliness would suffer. That’s why new employees begin their journey at Fairmont with Service Promise training, which focuses on the brand’s differentiator – providing exemplary customer service – followed by two weeks of extensive on-the-job training. In an effort to help staff apply what they’ve learned in training to their daily jobs, the hotel added a dedicated operations training manager to its team last year. This past January, Fairmont introduced its newest training program, Heartist, which teaches participants of the four-day in-class course, administered over four months, how they can connect with guests on an emotional level.

“Instead of process-oriented training, we’re focusing on delivering unexpected and personalized gestures that will surprise and delight those we come in contact with,” explains Stewart.

This heartfelt approach extends to hotel staff who are regularly recognized and rewarded for their achievements. Fairmont’s ServicePlus program encourages colleagues to honour the exceptional work of their peers by submitting ‘bravo-grams’ monthly. Each department also nominates one employee as ‘star of the month.’ This is in addition to the hotel’s recognition of leader, health and safety, and sustainability/charitable stars every month.

“It doesn’t stop there,” says Stewart excitedly. “Throughout the year, each department has its own initiatives in appreciation of colleagues, including monthly celebrations specific to their teams and daily recognitions.”

In the housekeeping department, staff are awarded a coin whenever they go above and beyond their job description to contribute to the hotel’s success. Collected coins are redeemable for a reward of the employee’s choosing, such as a movie gift card or monthly transit pass.