An office building on Cachet Woods Court, in Markham, Ontario’s technology hub, plans to be the first net positive energy office building in Canada, generating more energy than needed for annual operation. Though still a work in progress, the new structure anticipates going beyond building industry standards like LEED or even net zero energy — a concept where buildings incorporate renewables and energy efficiency to produce the same amount of energy they consume every year.

The three-storey Howland Green Business Centre, expected to be finished around March 2019, will feature office condos in 59,000 square feet of space, powered by sun and geothermal energy.

Dave De Sylva, president of Howland Green Homes, believes it will be a challenging feat, but also a significant step forward for the sustainable building industry.

“We’re employing brand new insulated concrete forms to our building; we’re instituting energy storage that cuts the curve off of any peak demands there,” he says. “If we’re producing or capturing 25 to 30 per cent more energy than we are using, I don’t know of any building that has accomplished that.”

The entire outside of the area exposed to thermal transmission will be constructed not just of insulated concrete form, but new forms designed specifically for Howland Green, resulting in a combined thermal resistance value of at least R40, much higher than insulated formwork in standard buildings.

An R80 roof insulation, about four times greater than the building code, will block careless energy transfer, depending on the season. Windows will also be designed with advanced fiberglass technology and low-E argon glass, with resistance values as high as R9. This surpasses the insulation value of standard triple-glazed windows.

The latest geothermal technology will heat and cool the building with automatic load sharing and individual office controls at a fraction of the cost of other buildings.

“The geothermal system changes almost every year or two and becomes so much more efficient,” says De Sylva. “You aren’t wasting energy on certain parts of the building; you’re moving it around the space in an efficient way.”

And one of the largest rooftop photovoltaic arrays is expected to capture about 420,000 watts of solar energy and generate about 515,000 kWh of clean, green energy. This will help offset the carbon footprint, as the operational demand for the entire building will be approximately 430,000 kWh. 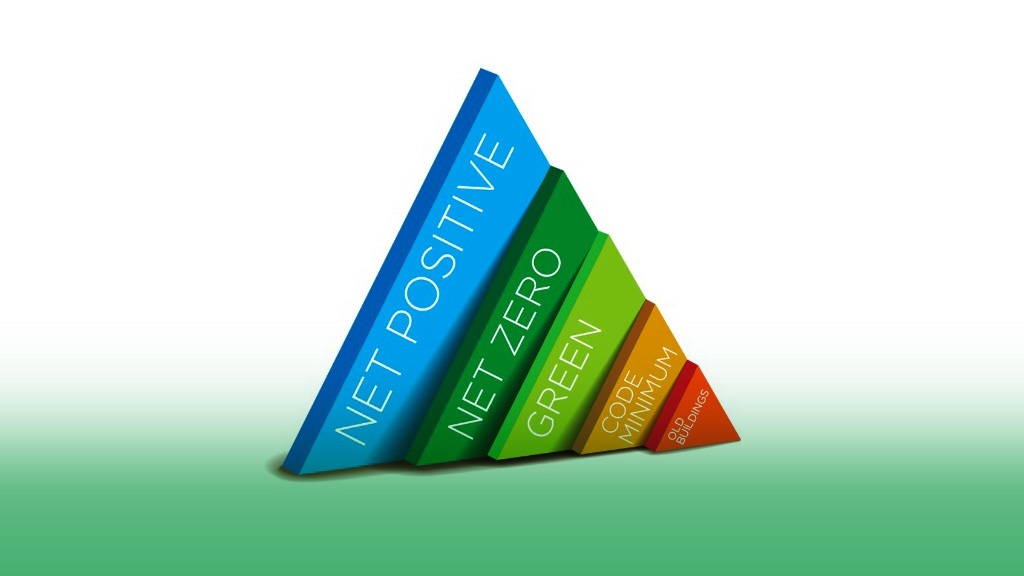 To store the excess energy being generated and use it for the future, the building will have one of the first electric potential lithium-ion and pneumatic energy storage systems in Canada. The system will capture some constant energy uses within the building and use pneumatic energy, through wind or photovoltaic solar production, to compress air, which could drive exhaust fans and garage doors, for example. Energy can be dispersed when needed, with help from an innovative water recycling system that will harvest all rainwater and recycle it on site and LED lighting with motion sensors.

Besides fossil fuels, which people use whenever they want, De Sylva says “we have to find better ways of storing today’s energy.”

“We get energy from the sun every day, every year in the range of 174 megawatts, which is why we only use one-and-a-half of one per cent of the energy that falls on the earth,” he says. “There is enormous potential to store that energy.”

For property owners and managers, energy demand on office suites is much lower in net positive buildings and the savings would give occupants reduced condo fees. The biggest benefit, according to De Sylva, is not giving people free energy because doing so creates wasteful practices. With a net positive building, the energy coming in gets metered out to the user. They would be charged the amount they normally pay; however, the income goes to the office condo, thereby reducing operating costs.

The roadblocks of building to net positive standards are many. Building in a way where utilities aren’t making money creates resistance. The infrastructure itself is more costly than difficult, but Howland Green has been building some of the most efficient, net zero energy structures in the Greater Toronto Area for years, so they feel prepared for what’s to come with their new Markham project.

A developer of both commercial and residential properties, Howland Green plans on producing more clean energy from solar and wind than ever before. Their efforts have already led to projects that use 20 per cent of the energy used by typical condo buildings, from GreenLife Centre in Markham to GreenLife Main Street in Milton, Ontario, which was the first net-zero building in Canada when it was erected in 2012.

There are hundreds of options to deal with the global issue of atmospheric carbon, says De Sylva. The solution doesn’t always have to be solely fixated on a site.

“When someone talks about molecules that reflect back into the earth and cause global warming, they don’t say in Waterloo, Milwaukee or South Africa – we all share a global atmosphere,” he notes. “At the end of the day, when a project is finished, there’s the bigger issue of whether you added or subtracted from the global footprint.”