The Greater Toronto Area (GTA) is expected to be Ontario’s fastest-growing region over the next 25 years, one factor that will fuel commercial development in major transit nodes now being built.

A new report by Avison Young titled Transit Nodes of Tomorrow: Development Opportunities in the Greater Toronto Area, singled out four areas that will see major growth as the population rises and the provincial government invests more in transit infrastructure. They include East Harbour, Vaughan Metropolitan Centre, the Pearson Transit Centre and the Hurontario Light-Rail Transit corridor.

Back in 2014, The Ministry of Infrastructure made the largest investment in Ontario’s history, with more than $160 billion over 12 years, 51 per cent of which is tagged for improving roads and transit. Meanwhile, as residential and commercial demand intensifies in these four locations so do investments from private developers. Doing so will also help accommodate an expected 9.6 million people by 2041.

“With so much planned development on the drawing board and funding in place, this is a time of opportunity for forward-looking commercial property owners and occupiers,” said Bill Argeropoulos, principal and practice leader, research (Canada) for Avison Young.

From east to north, opportunities to capitalize on this growth are plentiful. As cited in the report, here are some ways landlords and real estate investors stand to benefit. 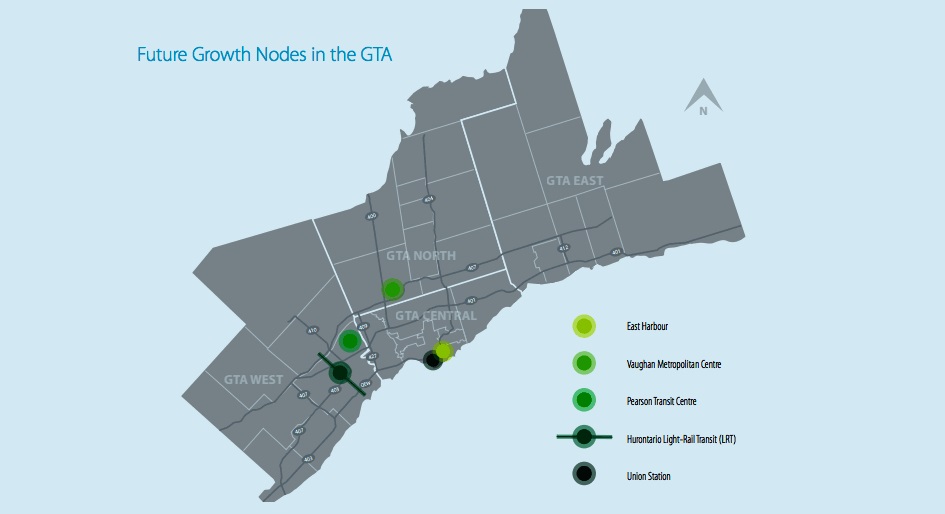 Toronto’s core is expanding beyond its traditional downtown boundaries, now moving eastward to underutilized lands along the shore of Lake Ontario. What were once industrial areas, including the East Bayfront district, Port Lands and First Gulf’s 60-acre East Harbour site, are poised to experience massive mixed-use development, integrating together to create new neighbourhoods.

Development is already underway on projects along Queens Quay east of Yonge Street with additional projects in the planning stages extending all the way to the Don River. The East Harbour site, located north of Lake Shore Boulevard on the east side of the river, is positioned to be the next phase of this development trend.

The East Harbour proposal, currently under review by the City of Toronto, is designed to provide a commercial centre linking the surrounding areas, increasing the city’s office space to accommodate more people.

Developers are planning 10 million square feet of office space and two million square feet of shops, restaurants, institutional space, parks and public spaces, along with a major new transit hub connecting existing and proposed GO subway and streetcar lines. This will provide transit connections for the estimated 50,000 workers who could be employed there. Pedestrian, bicycle and automobile routes will connect East Harbour with new and existing communities.

Tenants will see a greater supply of options for commercial space near downtown, providing relief to what is already a tight leasing marketplace. Meanwhile, investors and owners in surrounding areas stand to gain from enormous value adds. 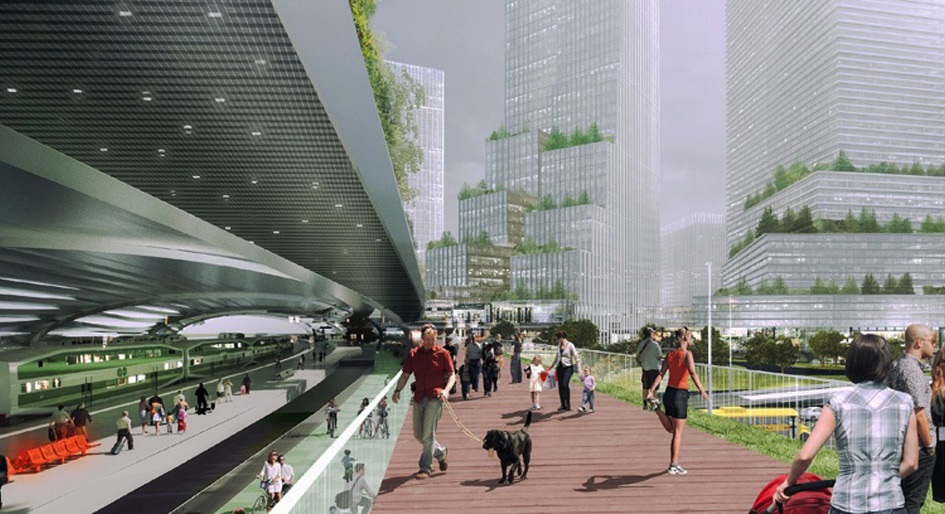 Located north of Toronto, the 400-acre Vaughan Metropolitan Centre (VMC) will bring the urban to the suburban as SmartCentres transforms 100 of those acres into a live-work-play development.

The City of Vaughan’s new downtown will be a mixed-use haven for a growing population. Amenities to residents and visitors include public and event spaces, entertainment, recreational trails, residences, community programs, green spaces and a proposed nine-acre central park spanning the entire site.

The first new building to rise is the KPMG Tower, a LEED Gold-certified class A building. Construction has also started on a mixed-use tower with professional services firm PwC as the lead office tenant. This building will be home to a flagship YMCA with childcare, fitness and aquatic facilities and a City of Vaughan library and studio space.

The majority of the land within the VMC is privately owned, however, the municipal government is encouraging development with its adoption of the Vaughan Metropolitan Centre Secondary Plan, which includes flexible, developer-friendly zoning rules. Various infrastructure projects, mainly related to transportation, are under construction.

The ability to commute by mass transit allows for the creation of high-density commercial and residential properties.Increased property values will likely result along the transit lines and in the surrounding areas. A location on the subway line commands top rents and increased building valuations.

Dubbed “Union Station West,” The Pearson Transit Centre would help relieve pressure when the airport reaches capacity by 2030. The hub would connect many existing and planned local and regional modes of transportation and would include a large surrounding mixed-use business park featuring office, retail, hotel and other commercial spaces.

Pending regulatory approval, the Pearson Transit Centre will increase the airport area’s ability to attract and retain tenants and offer occupiers access to a larger labour pool. Tenants will enjoy the benefits of urban-style transit infrastructure in the suburbs with the added bonus of having a direct international airport connection.

The proposed Hurontario light-rail transit (LRT), anticipated for completion by 2022 with a $1.4 billion investment from the province, is expected to increase capacity and commute times along the Hurontario corridor.

The corridor, which could carry more than 22 million people a year by 2031, passes through several commercial office nodes, such as Brampton and Mississauga where population and employment figures are projected to rise.

Avison Young’s report cites several benefits the LRT could bring to business and investors as residents and employees move through the corridor. First, implementing it would encourage more people to become less car-dependent and improve walkability and wellbeing. Land previously slotted for parking could be used for better uses. There would be more opportunities for denser, mixed-use developments, which could encourage the development of new commercial spaces that require lower parking-space ratios.

Future new office space along the corridor will compete with existing space in traditional suburban nodes, while landlords may find opportunities to redevelop underperforming properties based on reduced parking requirements and increased employee density, or to accommodate a new mix of uses.

Landlords may also experience increased demand for space, resulting in higher rental rates and valuations for real estate assets. Tenants may be willing to absorb these higher rents if they can accommodate additional employees in their premises without exceeding their parking capacity.