A student has teamed up with the City of Winnipeg to study the movement of mosquitoes in an effort to determine a better fogging schedule.

Martine Balcaen, a second year student at the University of Winnipeg, has been examining where the dangerous insects head to once they’re fully grown.

The city currently uses trap counts to decide on a fogging schedule, but Balcaen explained that this data paints an incomplete picture of the mosquito population in a given area.

“The association of a trap count with a region doesn’t reflect anything about that region in terms of landscape characteristics,” says Balcaen, who moved to Winnipeg from her hometown of Calgary to pursue the study. “In short, it is not telling us the reasons that trap counts may be high there. No analysis is done beyond ‘There are lots of mosquitoes here this year, we should fog or treat this region of the city first.’ When we treat an entire region based on point data from one location within that region, we may be wasting resources.”

“Despite implementing a comprehensive larval and adult mosquito control program, City of Winnipeg insect control staff feel that possible movement of adult mosquitoes from rural untreated areas adjacent to the city into urban residential areas may occur during years with large mosquito outbreak events,” he said. “Movement of these mosquito populations may increase the presence of nuisance or disease-carrying female mosquitoes within the city and lessen the overall effectiveness of the mosquito control program.”

To track the mosquitoes, Balcaen set up pyramid-shaped breeding cages. After counting the mosquitoes present, she sprayed fluorescent dust over the cage to mark them. The bugs were then released and later re-captured and counted at traps within a four-kilometre radius of the breeding site. 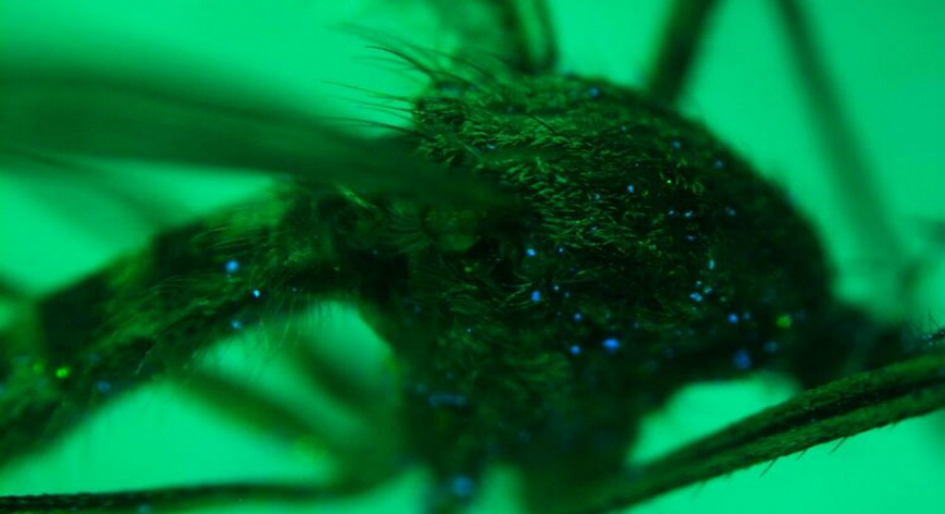 “[Martine’s] data has also shown that generally adult mosquitoes will stay within about five kilometres from where they emerged as adults,” says Nawolsky. “This reinforces the strategy that if there is a local outbreak in adult mosquitoes, the source may not be too far away.”

Ultimately, Balcaen hopes to provide the city with data to inform their control efforts, and a strategy that is less about preventing mosquito breeding than it is about understanding their relationship to different landscapes to better target them.

“What I’m looking at is an end-of-pipe solution, so we’re acknowledging the fact that we can’t get rid of all the breeding sites,” she said. “So what my project is looking at is if we do have to spray, we can spray the areas where we can hit them the hardest.”