The latest phase in converting the century-old Royal Connaught Hotel in Hamilton, Ont., into condominiums includes The Moderne—a 36-storey residential building that will stand as one of the tallest condo towers in the downtown area once complete.

Adjacent to the historic residences at the Royal Connaught, it will rise along King Street and Catharine Street with one bedroom, one-bedroom plus den and two-bedroom suites. The Moderne follows the first two phases of Royal Connaught Square at 112 King Street E. and 118 King Street E, which are steps away from Gore Park.

Hamilton has experienced a great resurgence over the years, from a steel-dominated industrial hub to a city fueled by creative industries. Homebuyers cut out of the pricey Toronto housing market are moving there and a crop of tech firms and other companies are restoring historic buildings, attracting new people and bringing new business to the area.

Spallacci Group and Valery Homes have been restoring the Edwardian-styled Royal Connaught after the building sat vacant for over a decade. Opened in 1916 and named after the Duke of Connaught, a former Governor General of Canada, it has hosted prime ministers, royalty and Hollywood stars.

As Ted Valeri, president of Valery Homes, said, Hamilton is now a major hub in the Golden Horseshoe. With the Niagara-Hamilton Trade Corridor on the way, its at “the epicentre of exponential growth.”

“We know that this has been a tough year for the city, but the changes that have occurred in our downtown over the last five years have been dramatic and are here to stay,” added Rudi Spallacci, president of Spallacci Group. We’re thrilled to have played a role in that resurgence. Now is the right time to bring The Moderne to market and continue to support the city with new investment.”

Burlington-based architect KNYMH is crafting the high-rise condo into a contemporary urban look with glass and metals. The podium emulates the streetscape, with brick cladding, stones and keystones on the exterior.

“The Moderne’s design provides multiple focal points for Royal Connaught Square,” said Shem Myszkowski, president, KNYMH. “We are enthusiastic to continue this vision from the project’s birth. Introducing a new modern architectural style creates a gateway into the past history and nostalgia, while respecting the vision of the city with a new addition to Hamilton’s skyline.”

Toronto-based interior design company envisions a fusion between historical and modern, and mid-century modern and contemporary elements, from design features to the lighting, finishes, textures and furnishings. 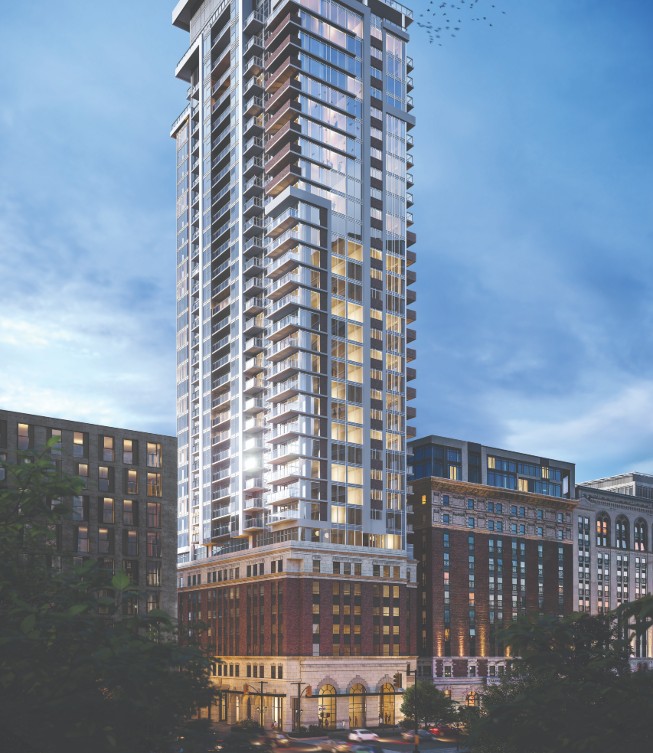