The Goode promises heritage-inspired urban living as it takes shape on Parliament street in the Distillery District. Steps from the cobblestone pathways that lead to galleries, shops and artisanal markets, the condo, as its name implies, will be a salute to the early 19th-century Gooderham & Worts, once one of the world’s largest distilleries.

Expected to rise 32 storeys, with a mixed-use podium, the project is the brainchild of Graywood Developments and designer architectsAlliance. Once complete, the condo will make history of its own, standing on one of the last parcels of residential land in the district.

Inside, suites will range from singles to three-bedrooms. Amenities will cater to young professionals and families, and include a multi-purpose room, a co-working area, fitness studio, bicycle repair room, makers table and pet wash. A large roof terrace with a swimming pool and rooftop garden stand atop the 10-storey podium overlooking Distillery Lane. 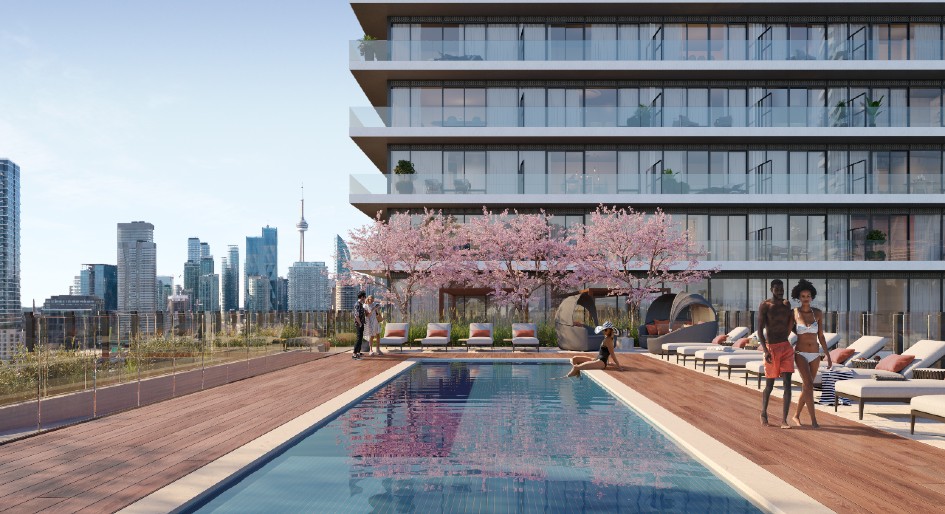 Amenities at The Goode include a swimming pool that sits atop the 10-storey podium with striking view across the city and lake.

Outside the Distillery District, the nearby Port Lands redevelopment is bringing 25 hectares of publicly accessible greenspace and parkland, and a naturalized river and new island to the east end. The future rapid transit Ontario line, that connects to overall subway service, will include a stop in Corktown. As Graywood Developments’ President and CEO Stephen Price, says, “From the new Parliament Slip, to the extension of transit, the naturalization of the Don River, and more, the rate of change in this part of the city is unmatched.”

As designer of three existing condos in The Distillery District, architectsAlliance is looking forward to working, once again, amongst “one of the largest assemblages of industrial heritage buildings in Canada.”

“The Distillery has emerged as one of the most desirable residential neighbourhoods in the city, while realizing its vision as a flourishing cultural and entertainment centre,” said Peter Clewes, managing partner and design director, architectsAlliance. “It’s been rewarding for us to revisit our initial concept – while individual design expressions evolve over time, our underlying design principle is constant: to preserve the soul of this remarkable place.”

What the Toronto firm has envisioned is a design that uses masonry alongside glass and metal, which ties the podium to the Distillery’s distinct aesthetic and complements the existing character of the neighbourhood.

On the tower, repetitive metal bands frame windows on every other floor, breaking up the massing and getting more granular with height, while a pattern of windows adds playfulness and texture to the exterior.

For the interiors, DesignAgency took references from the site’s history, while adding a modern spin. Dramatic black and white moments are complemented by clean and modern materials with neutral palettes, while pops of amber are drawn from the timeless brick and glass design of The Distillery and used along with fresh yellow accents.

“Understanding the diverse lifestyles our future residents will live, we introduced spaces for people to socialize, relax and work throughout the building,” said Carolyn Roche, senior designer at DesignAgency. “We wanted to draw from the cultural elements that define the area and infuse it into our designs.”

Physical connections between the building and The Distillery will be realized through the L-shaped podium that carves out new publicly accessible space behind The Goode. To tie the project to its surroundings, a partnership sparked between Graywood and partners Cityscape Holdings and Dream, the current owner-operators of The Distillery, who will be taking over the retail portion of the development.

Standing 32-storeys, the architectsAlliance-designed building will be one of the last residential condos to come to The Distillery District.

Feature photo: The Goode will animate Parliament Street and The Distillery District, with crisp architecture and a podium that blends seamlessly into its surroundings.