Earlier this week, Saskatchewan said it will privatize janitorial services at all its government buildings.

The province says it will save $3.5 million every year once it transitions to 12 contracted cleaning companies.

Earlier this year, 230 workers in 17 communities across Saskatchewan were told they would be laid off at the end of June. The Saskatchewan Government and General Employees’ Union (SGEU) called the move “ideologically-driven and mean-spirited.”

“My heart goes out to these workers, and their loved ones, who are under enormous stress, wondering how they’re going to pay their bills come June,” said SGEU President Bob Bymoen. “It’s shameful for government to be making its lowest-paid, most vulnerable employees pay the price for its own financial mismanagement.”

Six of the firms set to receive contracts are employee-owned companies that have all agreed to hire existing government cleaning employees.

More than 1,000 bids from 65 companies were received on the 95 buildings offered to suppliers through a Request for Services process that closed February 10, 2017. The Ministry of Central Services has thoroughly analyzed and scored the submissions over the last several weeks. The evaluation process is being monitored by an independent fairness advisor from Meyers Norris Penny.

Next up, the ministry will negotiate janitorial contracts and anticipates the firms will start cleaning government-owned buildings by July 1, 2017. 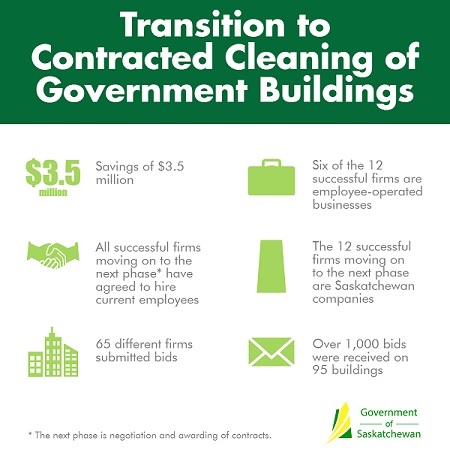