The Forest Hill will become one of the first condos with direct subway access to the Eglinton Crosstown LRT when the fourteen-storey building rises at the corner of Bathurst and Eglinton Avenue West.

Situated among million-dollar homes in one of Toronto’s most affluent neighbourhoods, Forest Hill, the CentreCourt development will feature a mix of suites from studios to three-bedroom units, many starting in the $400,000s.

“We wanted to bring a high-quality development to this area, but in a way that allowed the vast majority of people interested in purchasing a condo to have a type of unit they could afford,” says Gavin Cheung, vice-president of CentreCourt.

The vision for the condo also includes connecting the lobby directly to the future Forest Hill subway station, with a private and secure entrance for condo residents and a 24-hour concierge.

Crosslinx, whom CentreCourt teamed up with for The Forest Hill, is currently using the developer’s site as a staging area to accelerate building the station, set for completion in 2021. Once direct connection to the condo is in place and much of the below grade construction finished, Crosslinx will hand over the site to developers to build upon. In that sense, the subway is expected to be mostly operational by the time residents move in.

Such projects are unique in a growing city where development opportunities near transit nodes often go unrealized.

A new study, “Transit Nodes in Ontario Have Untapped Development Potential,” published earlier this year by Ryerson University’s Centre for Urban Research and Development, found there is substantial capacity for development, especially around many of Toronto’s subway stations.

Toronto’s newest subway stations between Downsview Park and the Vaughan Metropolitan Centre offer the most space for residential development. Land is also underutlized around a quarter of Toronto’s older subway stations, such as York Mills, where density is under four units per square acre. Meanwhile, the study cites less construction activity around the future Eglinton and Finch LRTs, compared to new LRTs in cities like Hamilton where zoning changes have boosted housing supply.

CentreCourt also found the rarity of their project when conducting internal research ahead of the land purchase. The company found their building would be within only one per cent of Greater Toronto Area condos with a lobby-to-subway connection.

“There are challenges anytime you want to do something out-of-the-box “ says Cheung. “But we’ve been able to execute on that. It requires a lot of heavy lifting, good coordination, lots of give and take and good partnerships with the city and municipal institutions. At the end of the day it’s very doable.”

The new LRT offers a chance to perhaps increase these types of transit-oriented-developments, which, in turn, provide economic advantages.

“I expect that over the course of time you’ll see a lot of that type of development along the new subway line because it brings huge benefits to the developments directly connected, but also to everyone who lives near them and has an extra access point to the subway—a full integration into the mass transit, which is the lifeblood of our city,” notes Cheung. 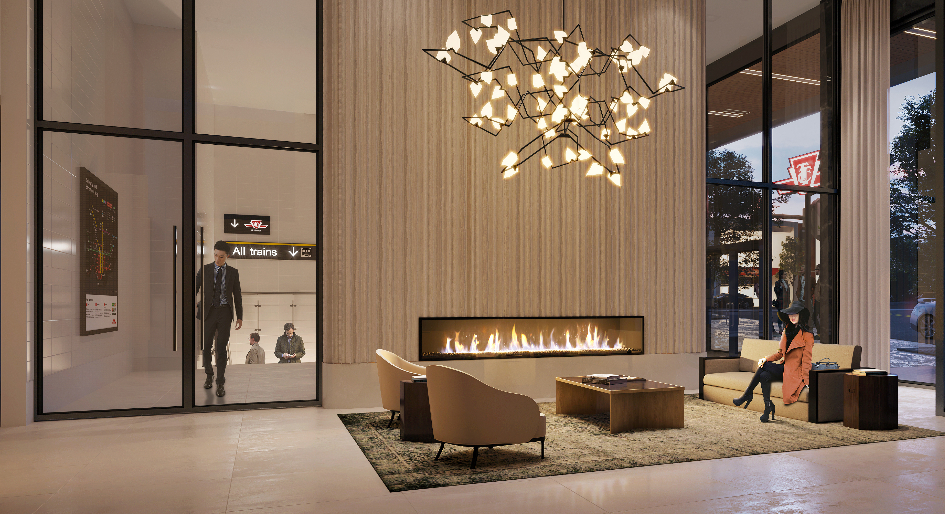 As for the design, the metal-clad building will be broken into three distinct volumes and incorporate a monochromatic colour palette, according to the architect Quadrangle. The design will allow for sunlight to penetrate suites, balconies and terraces, and a retail street presence along Eglinton Avenue West.

Traditional architectural and design elements will be reimagined through a contemporary lens, as figure3 takes on the role of interior designer. The firm says the result will be classic and timeless.

“The beauty of this building is we have a breadth of product and fabulous amenities that appeal to a of mix people, everyone from empty-nesters to students,” adds Cheung. “It’s set up for this amazingly high-end experience the moment you walk in, which carries through to the shared amenities.”

A co-share social workspace with a coffee bar and meeting rooms will cater to those part of the modern economy, such as remote workers looking for flexible workspace, entrepreneurs and students. An almost 4,000-square-foot gym will feature CrossFit and yoga areas.

Above all, CentreCourt is expecting a lot of perceived value for a condo with direct access to transit.

“It is a very, very rare occurance,” says Cheung. “That huge price appreciation that naturally follows the opening of a subway—we’re just on the front end of it at The Forest Hill. We’re confident that the people who make it into the condo now will see that ground floor opportunity and be the beneficiaries of it.”

Rebecca Melnyk is the editor of CondoBusiness