Plans are moving ahead for the Capitol Residences—a tribute to the Capitol Theatre landmark in which it will rise 14 storeys in midtown Toronto.

Madison Group and Westdale Properties, along with Hariri Pontarini Architects and Turner Fleischer Architects are reviving the Toronto theatre in the YongeEglinton community at Yonge and Castlefield. The 145 suites will range from 425 to 1950 square feet.

Part of the theatre-turned-condo transformation will be preserving the original marquee and façade at the base three floors. The project will pay homage to the theatre’s rich history from its 1914 debut to its last curtain call in 1998 before becoming a popular event venue.

Especially valued during the Great Depression of the 1920s and 1930s, the theatre was home to screenings and shows including Annabella, Wings of the Morning, and Jane Eyre.

The design uses a palette that ties the building both to the existing context and to the original Capital Theatre facade, previously designed by John MacNee Jeffrey. The team selected a warm coloured sand cast brick and light coloured smooth stone finish for the main body of the building. 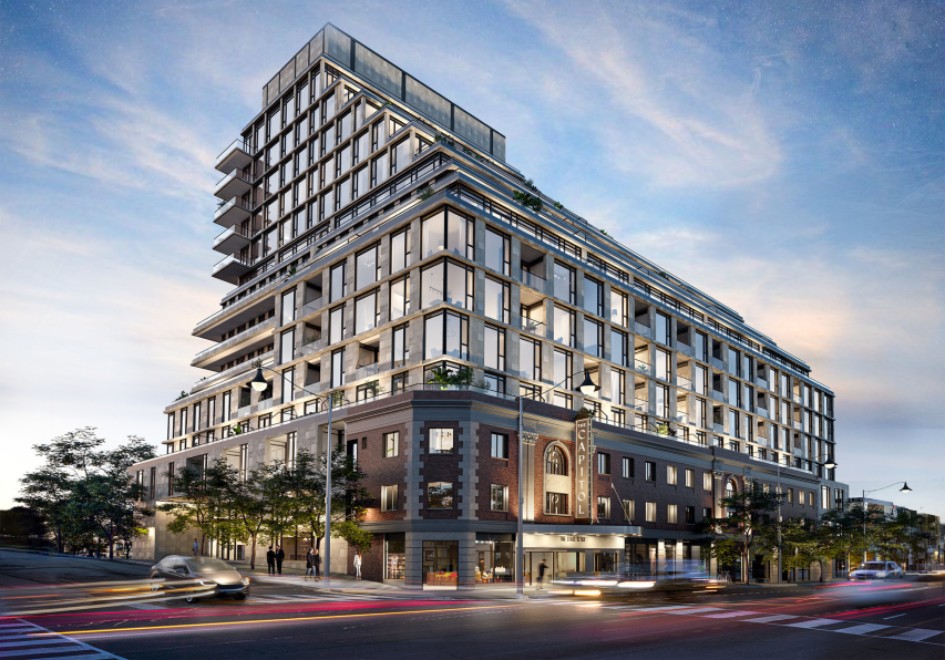 The residences themselves will feature extensive private terraces and oversized balconies. The tiered levels on the east side will bring in landscapes to the terraces, while the west side of the property will add new greenspace to the city with the conversion of a parking lot into a 3,700-square-metre park.

Studio Munge has created an interior experience characteristic of theatre and film as early as the 1920s. The original art deco marquee and façade compliment an elaborate porte cochère to usher residents into a lobby conducted by The Capitol Concierge. Suites will feature 10-inch ceilings and handpicked finishings.

“Over the last century, the Capitol Theatre has been a staple in Toronto’s entertainment scene and we are honoured to bring new life to this highly historic venue through the launch of its namesake residences,” says Josh Zagdanski, vice president of high rise at Madison Group. “This mid-rise project will capture the nostalgic vibrancy of years past while adding a modern twist on the original style.”