Properties purchased in Scarborough in the six months prior to COVID-19 have jumped in value by 25 per cent—appreciating more than other parts of Toronto, including the downtown core.

Real estate brokerage, Properly, compared the purchase price of homes bought in the lead up to the pandemic (September 2019 – February 2020) to this month’s data from its AI-powered home value calculator. It found the pandemic trend of homeowners fleeing the city and flocking to the suburbs is happening in the city of Toronto itself.

Up until February last year, an average home in Scarborough cost $710,000. Now, its estimated to be $915,008. The most popular neighbourhood there is Scarborough Village where homes went up 31 per cent.

Besides Scarborough, home values also rose most in York (21 per cent), and Etobicoke (19 per cent). Meanwhile, home values in Toronto’s uptown have seen the lowest appreciation at just five per cent, followed by midtown (seven per cent) and downtown (eight per cent). Neighbourhoods on the bottom of the list include Yonge-Eglinton, with a four per cent increase, the Waterfront and Casa Loma.

“There has been increased conversation around the skyrocketing homes prices in Toronto,” said Anshul Ruparell, co-founder and CEO of Properly. “But what’s happening is actually the reverse of what we usually assume: that people want to be close to downtown. Old Toronto is seeing the overall lowest appreciation within the City of Toronto. It remains to be seen whether this shift away from the core will continue, but the Instant Estimate allows all homeowners in the GTA to easily track the value of their home in real time.”

Here’s a more detailed list of home values across all Toronto neighbourhoods. 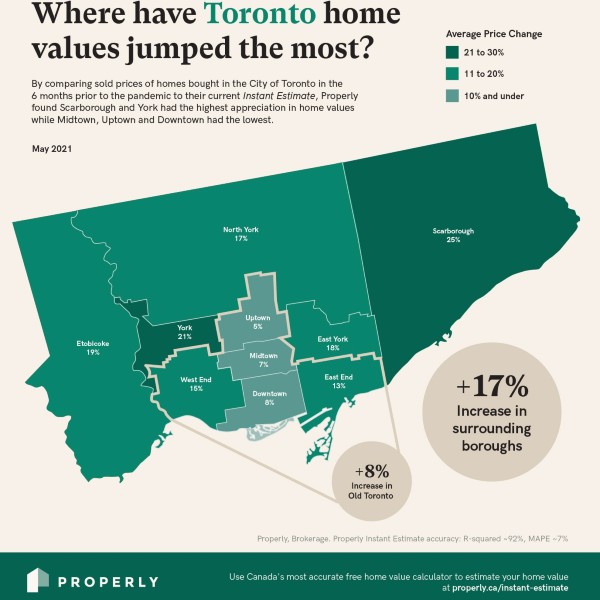