The condition of a workplace restroom reflects how much a company values its workforce, according to 89 per cent of Americans who were queried in Bradley Corporation’s 2017 Healthy Handwashing Survey.

The annual survey asked 1,042 U.S.-based workers about their workplace restrooms, handwashing habits in public restrooms and concerns about germs, colds and the flu.

Even though 67 per cent of workers ranked their restrooms as excellent or very good, they still flagged a need for improvement. Their wish list included installing more touchless fixtures, such as automatic toilets and motion-activated faucets. They also want air fresheners at their disposal, full-length mirrors, shelving for belongings and electric hand dryers.

Nearly half of respondents say they’ve experienced issues with their workplace restrooms that a little deodorizer or automatic fixtures could address. The top complaints uncovered by the survey were unpleasant smells, clogged or unflushed toilets and empty or jammed toilet paper dispensers.

The survey also explored handwashing behaviors in and out of the workplace. Sixty-one per cent of workers say they’ve seen a colleague leave the restroom without washing his or her hands. That’s a marked increase from the 2016 survey when less than half (42 per cent) said they had witnessed a co-worker skip handwashing.

When it comes to sick colleagues, the overwhelming majority of survey respondents consciously take steps to protect themselves. They avoid the person, abstain from shaking hands and wash their own hands more frequently.

Proactive measures outside of work

The survey found 70 per cent of Americans ramp up their handwashing practices during flu season. Hygiene actions include washing more frequently and more thoroughly or longer after using a public restroom.

“It’s positive news to find out that Americans are consistently using handwashing as their first line of defense against contracting a cold or flu,” says Jon Dommisse, director of global marketing and strategic development at Bradley Corp.

To avoid getting or passing germs onto others, respondents said they utilize a three-pronged approach. They wash their hands more frequently, stay home when sick and sneeze into the crook of their elbow. They also change the way they greet people by waving hello, not shaking hands altogether or using a fist bump. 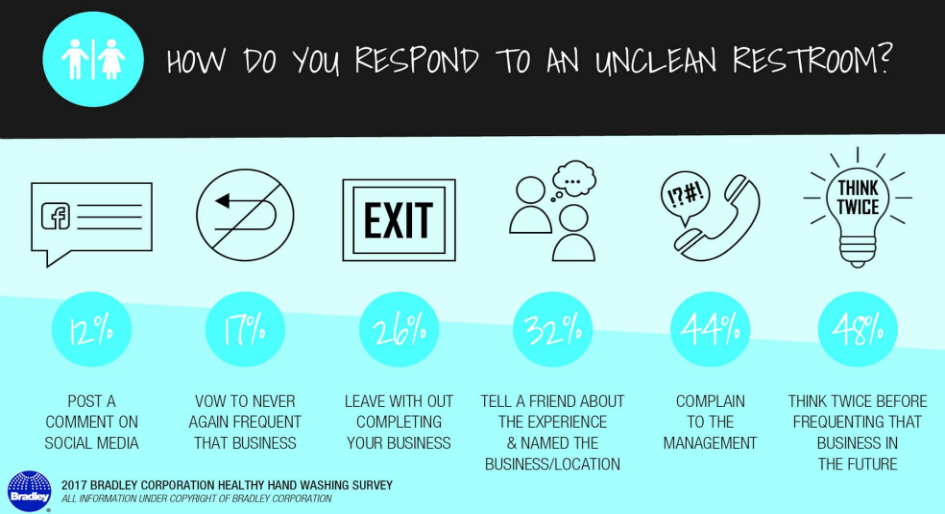