Since the recognition that the intrusion of contaminant vapours into buildings was a potential health issue, the science of contaminant vapour intrusion mitigation (VIM) has steadily improved, public awareness has increased, regulatory guidelines have become more restrictive, and an increasingly competitive market has demanded increasingly more cost-effective and innovative solutions.

Vapour intrusion is the movement of chemical vapours from contaminated soil and groundwater into nearby buildings. Now included as part of most environmental assessments, vapour intrusion pathways include cracks in concrete slabs, gaps around utility lines and sumps. Vapours can even pass through concrete, as it is naturally porous. Once inside a building, these vapours can be inhaled and cause immediate short-term and/or long-term health risks ranging from respiratory issues to cancer.

What can be done?

There are a variety of methods used to mitigate vapours which are generally classified as either passive or active. Passive methods prevent the entry of vapours into the building by sealing potential entryways, installing barriers or creating a passive venting layer. Active methods work by creating an active pressure differential between the inside of the building and outside. These include sub-slab depressurization systems in which blowers are connected to a suction pit underneath the slab that vents vapours outdoors or conversely, in-building over-pressurization in which a building HVAC system is adjusted to increase the pressure indoors relative to the sub-slab area.

Amongst all these approaches to vapour mitigation, contaminant barriers have seen the most technological advancement. Starting in the 1990s, contaminant vapour barriers began in the form of adaptations of simple waterproofing membranes. However, advancements in material science over the past several years has resulted in significant improvements in vapour barrier design and performance — offering much safer and healthier built environments.

Today, there are three basic qualities to a good contaminant vapour barrier:

Modern vapour mitigation systems employ a base layer comprised of an innovative metallized film sandwiched between polyethylene layers and the use of a spray-applied nitrile-advanced asphalt latex that seals penetrations and seams far more effectively and easily than comparable tape-based or heat-welded systems, and with much lower contaminant diffusion rates than generic waterproofing asphalt sprays.

To achieve the lowest contaminant diffusion rates available in a barrier system, scientists incorporated aluminium foil which is widely known to stop the diffusion of almost any common organic pollutant. Laboratory results indicate that the base layer for these systems offers 100 times more protection against trichloroethylene (TCE) vapours, a solvent commonly found on former industrial sites, compared to a high-density polyethylene (HDPE) base layer.

In addition, scientists incorporated nitrile into the latex asphalt core they use to seal the base layers. Used in other products such as chemically resistant medical gloves, the addition of nitrile resulted in a further reduction in permeation rates. Studies showed that the spray-applied nitrile-advanced asphalt latex offer 10 times improved performance in TCE vapour resistance versus a comparable styrene butadiene-based (SBR) asphalt core, which is typical in materials employed over the past 30 years.

The barrier material will not degrade over time

In order to meet this criterion, the materials selected for these new vapour mitigation systems are resistant to degradation. While there are some species of microbes that are capable of consuming latex or polyethylene, the rate of biodegradation is exceedingly slow and the environment in which these systems are installed would not be conducive to their growth. The threat of ultraviolet light degrading the material is a non-issue as the barriers are shielded from sunlight.

Modern vapour barrier systems employing aluminium foil protect the metal from corrosion by encapsulating the metal in polyethylene or polypropylene (polyolefin), covering the sheet with a geotextile, and then sealing all edges and seams in layers of nitrile-advanced asphalt latex. However, even if the aluminium itself were to be left exposed to air and water, due to a puncture for instance, a thin layer of protective aluminium oxide would form in a process referred to as atmospheric corrosion or passivation at pH levels generally encountered in soil waters.

Research has been conducted to determine the potential for corrosion failure of aluminized films coated with fresh concrete and subjected to moisture. Results show that even when an aluminized sheet was damaged exposing the metal layer, the geotextile layer placed between the aluminized sheet and the concrete protected the aluminium from corrosion.  Thus, modern aluminium containing films, when correctly installed with geotextile and proper seaming are very robust and not subject to degradation by atmospheric or alkaline-induced corrosion.

The other type of corrosion that can impact aluminium is galvanic corrosion, induced by the oxidation-reduction reactions between dissimilar or incompatible metals. This is exacerbated by the presence of electrolytes such as dissolved salts. However, with modern vapour barriers the aluminium layer is completely insulated from any galvanic corrosion by the polyolefin encapsulation, and any exposed edges are completely sealed in nitrile-advanced asphalt latex — eliminating any potential for dissimilar metal or electrolyte contact, thus ruling out the potential for galvanic corrosion. 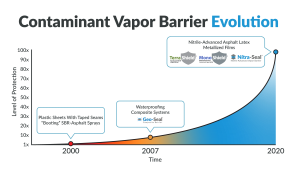 The novel barrier systems’ nitrile-advanced asphalt latex layer, which creates highly effective seals around slab penetrations, was designed to be puncture-resistant and reduce the chance of damage occurring after installation and prior to concrete placement.

The scientists and engineers who developed these new vapour barrier systems focused on multiple features to create a highly robust barrier able to withstand the traffic of a construction site and to improve the strength of the aluminium foil. These features include the incorporation of a reinforcing polyester grid laminated within the membrane, the sandwiching of the aluminium between high tensile strength polyolefin layers, and finally a geotextile laminated into the underside of the barrier and placed above the barrier system. These additional protective features work together to create a base layer that is quite durable and able to handle a wide variety of stresses during installation as well as post-installation stresses such as ground-settling.

In a 2014 study, it was found that a minimum of 0.03 kN/meter of tensile strength was required to withstand 100 mm of settling. The tensile strength of these new barrier systems is at least 200 times this minimum. In any case, if significant settling is expected, it is generally a good practice to install supports for a barrier as opposed to relying solely on its tensile strength. In the absence of such supports, these new barriers can already handle loads that are orders of magnitude higher than what is generally required.

Between the nitrile-advanced asphalt latex and the aluminium foil-membrane, these vapour barriers are also less likely to incur damage during construction, thus avoiding time-consuming repair work and maintaining the overall integrity of the system.

As urban development pushes forward and the need for safe living and work spaces continues to rise, so too will the need for contaminant vapour intrusion mitigation. This new state-of-the-art suite of vapour barrier systems is designed for easy installation and cost efficiency, and the science behind them represents the next step in the evolution of vapour intrusion mitigation.

The environmental industry is continually seeking novel and innovative ways to protect human health, the only question is where the science will take us next.

Scott Wilson is the chief executive officer and president of REGENESIS®, Inc.— the global leader in advanced technologies for contaminated site remediation. Since 1994, REGENESIS has developed and commercialized a range of proven soil, groundwater and vapour intrusion products to treat a wide variety of contaminants. It’s Land Science® division was established in 2008 to address the increasing occurrence and regulation of vapour intrusion. It provides scientifically proven solutions that offer environmental engineering firms and developers cost-effective and innovative vapour mitigation technologies for environmentally compromised properties. For more information, visit: www.landsciencetech.com.