Wasps have a frightening reputation for their stinging ability and aggressive behaviour and are often seen in greater numbers towards the end of summer as they scavenge for food in outdoor areas like restaurants, shopping centre food courts, gardens, garbage areas and around picnic grounds of school campuses and hospitals.

Wasps can be quite beneficial because they eat pests that plague plants around a facility; unfortunately, they can also deter people from a facility, which isn’t necessarily good for business.

Highly common wasps, at least in Canada, are yellow jackets. They can be found everywhere but prefer to build their homes near buildings because of the various nest-making materials to scavenge for, like old wood from a picnic table. Yellow jackets, for instance, harvest the wood pulp and mix it with their saliva to create their nests.

Unlike the gentle honeybee that attacks only once and dies if its hive is threatened, wasps are predatory and will sting multiple times if provoked. Wasps are long and slender with bright yellow stripes, whereas bees are furry with browner bodies.

“Wasps are opportunistic scavenger feeders,” says Tibor Szabo, former president of the Ontario Beekeepers Association and honey bee producer. “They have different resources than honeybees who are vegetarian and acquire all their resources from flowers. They eat meat, other insects, sugar and have short tongues that can’t access nectar from all the flowers a honeybee can.”

Why do wasps seem more aggressive this time of year?

“Wasp colonies begin to build in spring with just a queen, so you don’t see wasps too much during that time of year,” says Szabo. “As soon as she raises enough babies, she can stay home and lay eggs, while the other wasps take over the work and the nest grows exponentially faster.”

For Peter Power, owner and operator of Power Pest Control in Toronto, wasp calls start flooding in after Canada Day, when nests grow larger and there are a lot more wasps flying around, scavenging for food.

“When the temperature starts to drop in early September and October, they slow down and become more lethargic,” says Power. “Right now, the climate (in Toronto) is ideal for wasps. After the first frost or a sudden drop in temperature, most workers die off, however there’s always a chance a strong queen or female worker who can become a queen will survive by overwintering.”

“Some people believe placing a fake wasp nest on the property is the solution, but this isn’t always the best method,” says Power, who’s been stung multiple times on the job. He says that controlling the situation helps when using food, and suggests setting up wasp traps around the perimeter of eating areas and flower beds, as far from people areas as possible. Fill the trap with orange juice or something sugary, one teaspoon of sugar and a piece of meat. Wasps will be drawn into that trap and won’t be able to exit. However, though you can control them, a facility cannot be fully proactive and stop wasp activity.

Wasp traps can be effective at mitigating activity around a specific area, but aren’t as helpful when deterring a whole colony. Eliminating a wasp nest requires caution and care. Once a wasp stings, its venom contains a pheromone that signals danger and causes other wasps to become more aggressive, and a typical yellow jacket nest can house up to 1,000 or more workers by autumn. 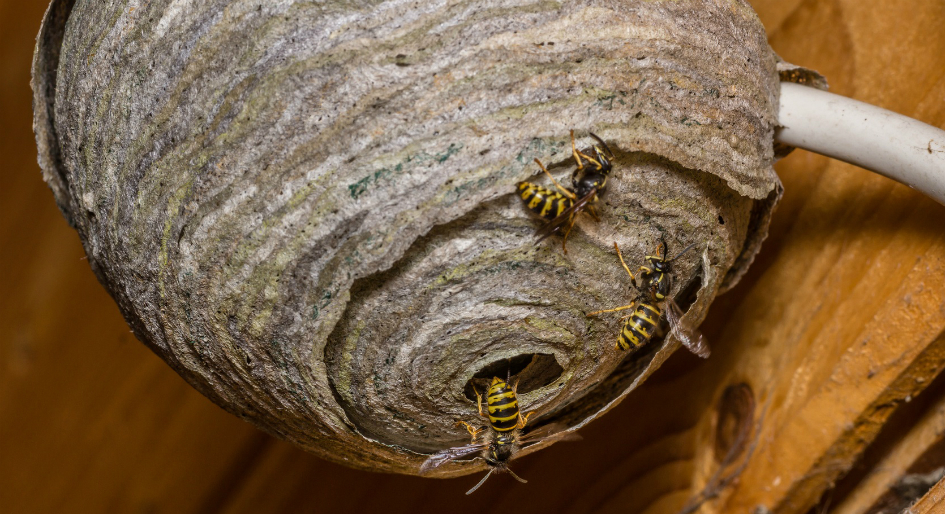 That said, a pest control company will have the right equipment and be able to remove wasps in tight spaces. They can also identify areas where other nests are forming and remove them.

Generally, there are two methods for removing a nest from an unwanted location, he adds. If the paper nest is visible and hanging from a ceiling, window corner or beneath a patio, the best method is to suit up from head to toe using proper protective equipment and use a wasp spray foam that shoots a jet stream six feet away. This is ideally done at night when the wasps are at rest.

According to the Canadian Centre for Occupational Health & Safety, consider suiting up in thick layers because wasp stings are long enough to reach through one layer of clothing. Also, power tools like lawnmowers and chainsaws will aggravate these insects, so ensure other maintenance workers have equipment shut off before spraying. Also, even when working near wasps, wear light-coloured clothes and avoid bright or dark colours, tie hair back and wear closed-toed boots or shoes, along with a bee-keeper’s style hat with netting to cover your head and neck. Tape pant legs to your boots and socks and your sleeves to your gloves.

The second elimination method involves wasp nests that are not visible and much more difficult to reach, such as those found inside a foundation crack. Power advises calling a professional in this case, who would set up a vacuum and suck the worker wasps as they leave the entryway. Since it may not be feasible to break the brick or wall to find the nest, it may be best to suck up as many workers as possible. After an hour or two, apply insecticide to the entry point, so when the remaining workers that weren’t caught try to enter the nest or leave, they will touch the insecticide.

Document a plan of action

When a wasp next is reported or discovered on a property, responding in a timely manner is always important to prevent harm and protect against liability. While most people experience swelling and redness, some have a mild allergic reaction. In rare cases, a severe allergic reaction can occur and cause anaphylaxis or anaphylactic shock.

“You want to make sure that when someone does report a nest sighting, you document it right away and document any emails sent to a pest control provider, showing a plan of action,” advises Power. “Also, until it’s taken care of, set up a notification on the property warning people of the wasp nest so they’re cognizant and use caution when working or playing in the area.”